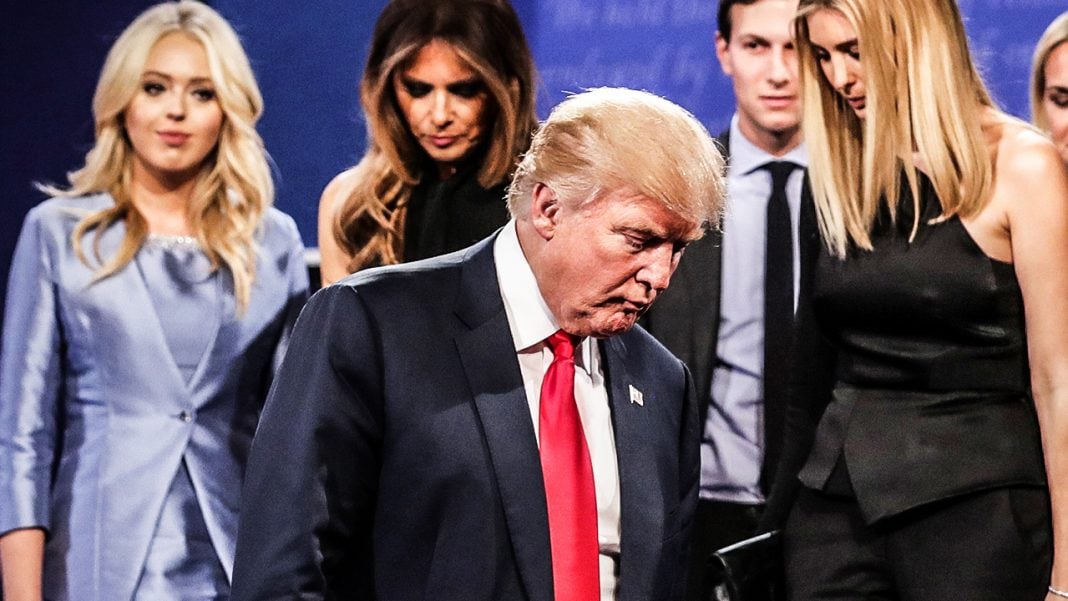 According to a new report from The Washington Post, Donald Trump and his legal team are trying to figure out what kind of pardoning powers the president can use for himself, his staff, and his family.  This is a fairly decent indicator that those in power understand they may actually need to use those powers, which can only be used after a conviction is secured.  That’s not a good look for the President right now, and it shows how desperate he’s getting. Ring of Fire’s Farron Cousins discusses this.

According to a bombshell new report from The Washington Post, Donald Trump has actually been asking his advisers in his legal team about his pardoning powers regarding himself, his family, and members of his staff. Now, according to the source from the Washington Post, this doesn’t mean that Donald Trump is walking around saying, “I can’t wait to pardon myself,” but the fact that he’s even wondering how far his pardoning powers extend tells us that there’s probably a reason he wants to know who and when he can pardon people.

Look, as a former member of the W. Bush administration pointed out this makes you look super guilty and that’s absolutely correct. You don’t ask people how to pardon yourself or your family unless you expect to have to use those powers. Now, it might be just a little inkling that you have to use them but if you have that inkling then you also understand that there probably are some potential crimes that Robert Mueller, the special prosecutor is going to uncover during his investigation.

Now, asking about the pardoning powers is only part of this Washington Post story. The Trump administration is also apparently launching a massive counter attack on Bob Mueller himself, and his team of investigators asking his staff, his lawyers to dig up all of the dirt that they possibly can on the people who are currently investigating the Trump administration. Their goal is to undermine these investigators by bringing up anything that they have in their past that might paint them in a negative light.

It’s exactly what Fox News typically does when a black youth in the United States is shot, rather than using a picture of them looking normal. They try to find the most disgusting horrible picture they can find and put that up on screen. That is exactly what the Trump administration is trying to do to these investigators. Probably not going to work, everybody in this country at least the majority of them already think that you’re probably guilty of something here, and this doesn’t even necessarily tie in to the Russian stuff.

Donald Trump understands that Mueller is going to go through his finances now, and that is what is driving Donald Trump crazy because there’s no telling who is involved in any of that, where the money is going, where the money is coming from and what kind of deals he or his family members may have made to help put him in office. This investigation goes far beyond Russia.

To be honest, if we’re going to have any chance of impeaching Trump it’s not going to be for anything involving Russia other than perjury. That is the key there. Anyway, that’s where we’re at with all of this. That’s the Trump administration. He wants to pardon himself, he wants to pardon his family and his staff, and he wouldn’t be having those thoughts if he didn’t think for a second that this special prosecutor is going to come up with some kind of dirt on him or his family or his staff.

Here’s another little interesting part of the story. A president can actually only pardon someone after they’ve been convicted. If Trump were to get convicted of something, he would actually then lose his pardoning powers and no longer be able to pardon anyone. Furthermore, if Trump is not convicted but other people are and he pardons them those people then lose their Fifth Amendment protection, meaning that they will be called to testify and they will not be allowed legally to not answer the questions.

It’s a lose, lose situation for Donald Trump right now, and I have to say that’s exactly what this man deserves.