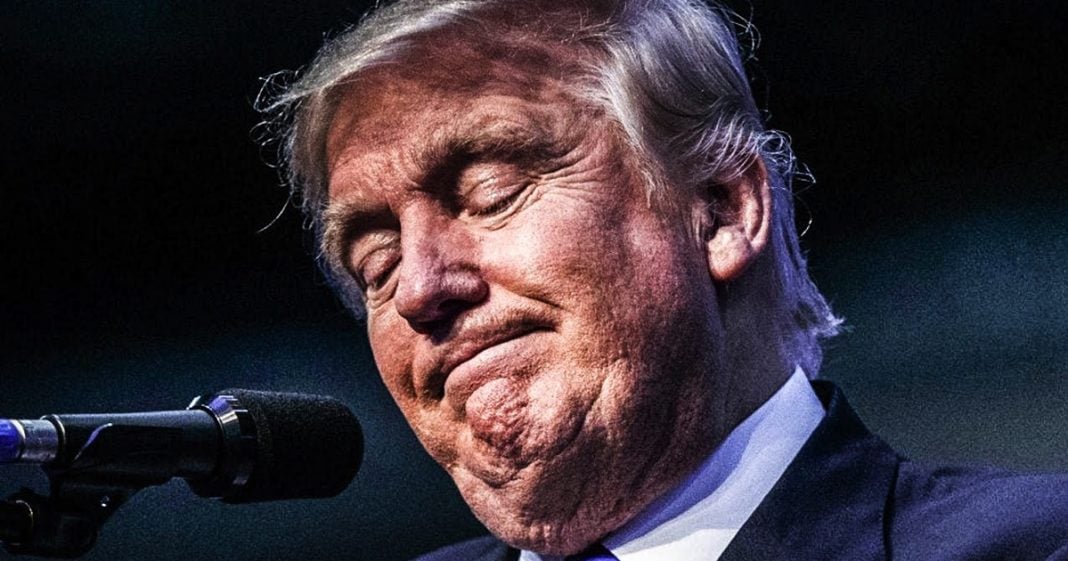 Donald Trump is not happy with Republicans in the House and Senate, but they aren’t too thrilled with him, either. Reports say that members of the Trump administration are insulting and demeaning people like Paul Ryan and Mitch McConnell, which isn’t a smart decision considering that these men are the ones standing between Trump and impeachment. Add to that the fact that wealthy Republican donors are growing tired of Trump, and that Republican wall of protection in the House begins to crumble. Ring of Fire’s Farron Cousins discusses this.

Technically, at this point, there is only one group of people standing in the way of Donald Trump and impeachment. Those people are the Republicans in the House of Representatives led by Paul Ryan. You would think, as any rational human being would do, when you understand you only have one set of allies protecting you from certain doom basically, you’d probably want to be nice then. You’d probably not want to be a complete jackass and have members of your staff like Steve Bannon openly insulting them and calling them names and saying that they’re worthless and useless leaders.

However, that’s exactly what’s happening within the Trump Administration. Donald Trump is losing his only allies in Congress, and that significantly hurts his chances of surviving for four years as president. If he continues to alienate people like Paul Ryan in the House and Mitch McConnell in the Senate, because the Senate’s the one that has to vote for conviction, he’s not going to have anybody there to protect him when we finally get the information that we need to go forward with full-blown impeachment.

Now articles of impeachment have already been filed. Those likely will go nowhere. I’m hoping they get rescinded or hoping they get built upon if the Bob Mueller special prosecutor investigation concludes at a timely manner before these articles get decided upon. There will be something, I have no doubt, that could lead to Donald Trump’s impeachment, but if he has those allies in the House, it will not go far whatsoever. It has no chance. He doesn’t seem to understand that sometimes you got to play nice with other people in order to save your own ass, because that’s what’s at stake here, Mr. Trump.

Meanwhile, Steve Bannon is out there calling Paul Ryan some pretty horrible names, names that I haven’t even called Paul Ryan, and you’re just letting it happen. If Paul Ryan chose, he could absolutely bring those articles of impeachment to a vote. He could meet with his Republicans behind closed doors and say, “Let’s get him out of there. We can work better with Pence anyway.” I would suggest you understand that Paul Ryan at this point probably has a little bit more power than you do, buddy.

Furthermore, it’s not just Republicans in the House of Representatives or the Senate that are starting to get annoyed with Donald Trump. The Republican donor class is tired of Donald Trump, according to a new report on Alternet, and they’re ready to start dealing with President Pence. They understand that Donald Trump is not a uniter, he’s not a leader. He’s not somebody that a majority of Republicans in the House or Senate and even the country are going to rally behind. He’s not the kind of guy that brings people together and, unfortunately for the Republican donor class, if they want those precious little gifts like tax breaks, they’re going to have to have all of the Republicans working together and possibly even some of the Democrats. Donald Trump isn’t the guy to do that, but Mike Pence would. He’s a great puppet for the wealthy elite.

While that would be bad for the country, the Republican donor class understands that they can get their members in the House, the people they’ve bought and paid for, to turn on Donald Trump and absolutely go forward with impeachment. Things are looking really bad for Donald Trump right now, and, unfortunately, regardless of the outcome, things are going to be bad for this country. One way or another, this ruling class is going to get what they want, at least to some extent. The only way to counter that is to let it happen now because, unfortunately, I don’t think there’s enough to fight it, and then vote these Republicans out of office in 2018, get Pence or Trump or whoever it is out of office in 2020 and start making the government once again work for the people instead of just the wealthy elite.