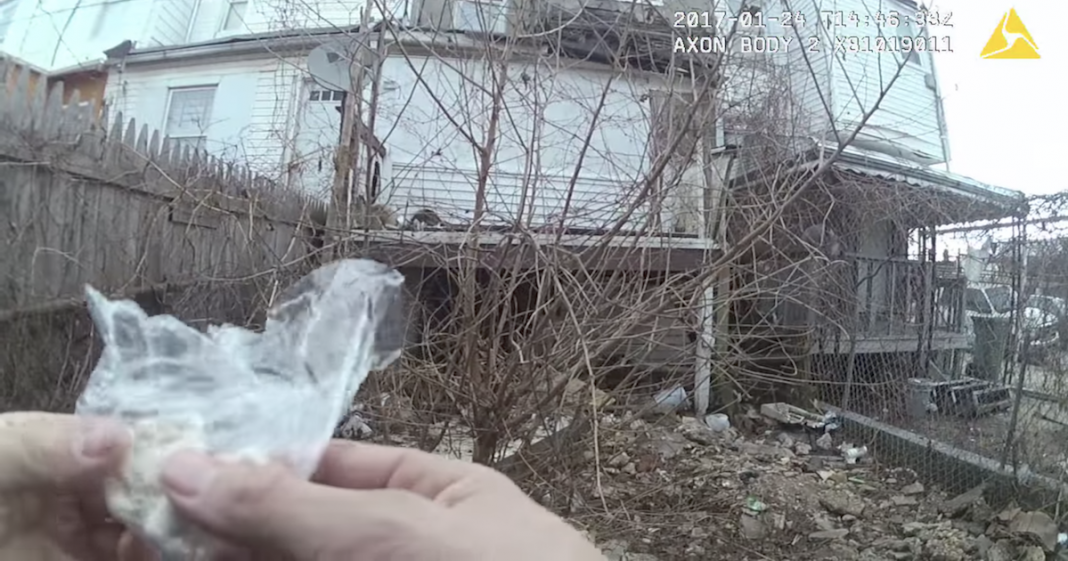 On Wednesday, The Baltimore Sun, revealed that during a drug arrest in January, a police body camera accidentally caught an officer planting heroin in a “trash strewn lot.” The footage was discovered by the public defender’s office in Baltimore, leading prosecutors to drop the case against an unnamed defendant. Now the officer, identified as Richard Pinheiro, is on administrative duty pending an investigation.

Pinheiro can be seen, along with two other officers, placing a bag of suspected heroin in an old soup can and hiding it in a junk-filled lot. Pinheiro then walks back to the street, flips his camera on, and after a short search, discovers the drugs. Unfortunately for Pinheiro, the body camera he was equipped with records 30-seconds of video, without audio, before being fully activated.

Footage shows officer placing drugs in trash; goes out to street, turns on camera, returns. Cams save 30 sec prior to activation, w/o sound pic.twitter.com/5ZW128lWFM

Baltimore Police allege that the cops could have simply been recreating a previous discovery of drugs, in order to capture video footage. Seemingly attempting to cover for his officers, Commissioner Kevin Davis told reporters:

“I’m not saying that there was a recreation of the discovery of the drugs, and I want to be careful not to say anything, because our investigation has to take it’s toll. But, it’s certainly a possibility that we are looking into to see if the officers replaced drugs that they had already discovered in order to document their discovery with their body worn cameras on. That’s certainly a consideration.”

Even if that were the case, it means that the police in Baltimore actively manipulate body cameras, in order to alter evidence. Heavy noted that a similar incident occurred in Pueblo, Colorado, leading prosecutors to drop charges against Joseph Cajar. During a traffic stop, Cajar was found to have drugs and a firearm in his vehicle. The search that yielded the illegal items was caught on camera.

However, it was later revealed that the footage had been staged. The Pueblo Chieftain reports that the arresting officer, Seth Jensen, texted a deputy district attorney that the video footage was not in “real-time.” The case against Cajar was dismissed.

In the wake of multiple occurrences of police wielding their power in abusive ways, the calls for body cameras have increased. However, without proper oversight, bad police officers will find ways around the technology.

The problem of abusive policing is widespread and complex. Inadequate training stemming from underfunding, recruiting unfit officers, politicizing of crime, the militarization of police, and a system that allows offending officers to skip from department to department without consequence all fail to keep bad police officers off the street.

While officers like Seth Jensen and Richard Pinheiro performed terrible acts as police officers, they are merely symptoms of a larger cultural issue surrounding our nation’s law enforcement. The men and women wearing a badge are largely good people. They face unthinkable horrors on a daily basis, just to pay their bills. That is something that most of us do not have to encounter in our careers. However, their elected superiors have built a culture of “us vs. them” within the ranks of the police.

Holding these officers accountable is important, however ultimately the political arm of police work must also face blame.