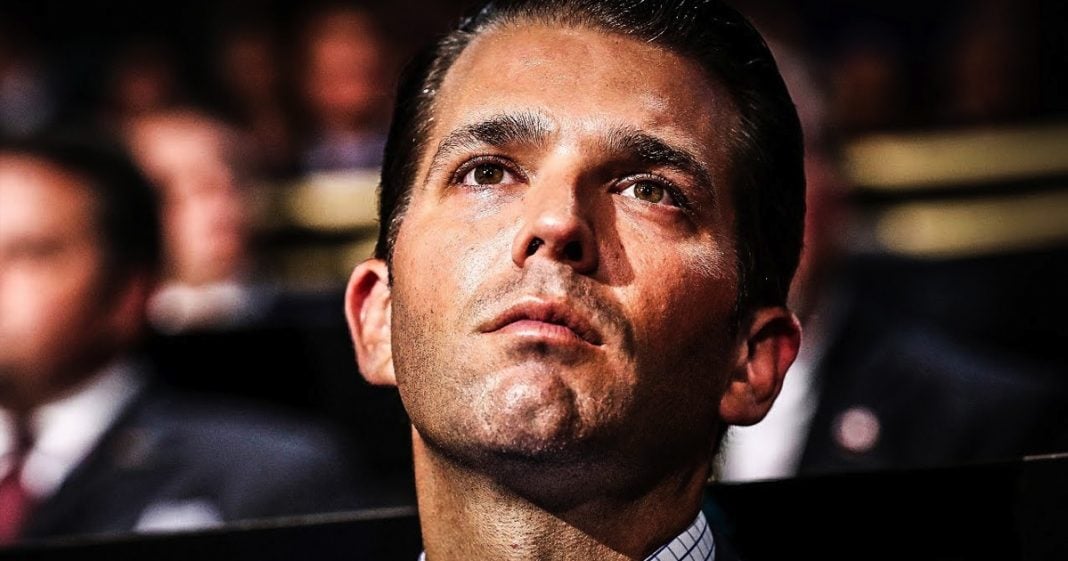 According to a new report in People Magazine, friends of Donald Trump, Jr. say that the president’s son is absolutely miserable, and he can’t wait for his father’s presidency to be over. We’re all right there with you, Donnie. Ring of Fire’s Farron Cousins discusses this.

According to a new report in People Magazine, Donald Trump Jr. and Eric Trump, their forgotten Trump brother, are quote, miserable, with their father’s new role as President of the United States. People Magazine interviewed alleged friends of Donald Jr. and Eric, and I say alleged because it’s hard to imagine that either of those men actually have friends, either way they spoke to people who know the brothers, and who talk to the brothers, and the brothers say that they are miserable with their father’s new found role, and the new found public scrutiny that the two boys are getting, that quote, they never wanted.

Here’s the thing guys. You have to understand that when you live your whole life doing pretty crappy things, like I don’t know, taking charity money away from kids with cancer, and steering it back towards your own organization, which both of the Trump boys have been accused of doing. Yeah, eventually the public’s gonna find out, and they’re not exactly going to like you. See, these two guys have lived most of their lives in the shadow of their father. Not too many people in this country knew, or even cared who they were, but now that their father’s in the spotlight, they found themselves the recipients of a hell of a lot of negative press coverage, rightly so. These two guys have spent their entire lives as millionaires, or more. Trump is to believe that they’re actually worth billions, but they’ve also done some very shady things throughout their careers.

As I pointed out, the issue of taking money away from kids with cancer, to give it right back to your own organization, instead of helping those in need, and that’s just one of many stories that have come out about the shady practices of these two boys. The big game hunting overseas, where they pose with these endangered animals that they’ve slaughtered. Yeah, probably not gonna get you a hell of a lot of good publicity from doing things like that, but the most interesting part of this article, is something where the public in general, shares a common interest with the Trump boys, because according to the article, the boys just can’t wait for Trump’s presidency to be over, and again, that’s something that for the most part, most of America agrees with you.

We can’t wait for this whole disaster to be over, and you know how you guys can help speed that along? Go testify in front of Congress, and tell them everything you know about the shady dealings of your father, and his campaign. That will put an end to this presidency, and the public scrutiny over everything you do, to bed.