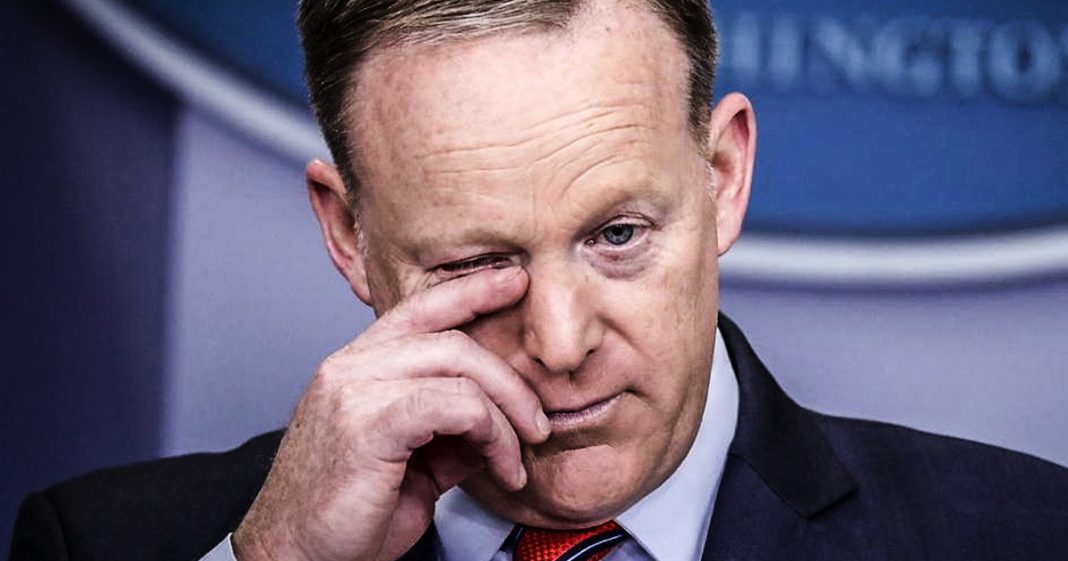 White House Press Secretary Sean Spicer returned to the podium on Monday – though off camera – to address reporters on the first day of “Made In America Week.” One of the questions asked of Spicer was whether Donald Trump would begin to manufacture the goods for his brands in the US, which Spicer deemed an “inappropriate” question. If you can’t ask that questions during Made In America Week, then when would it be appropriate? Ring of Fire’s Farron Cousins discusses this.

On Monday Sean Spicer, the White House Press Secretary once again took to the podium for the first time in almost a month, to answer some questions from reporters and, with it being the first day of Made in America week, one of the first questions asked of Sean Spicer was whether not Donald and Ivanka Trump would move production of their goods from their borderline sweatshop conditions in China over here to the United States.

Spicer responded by saying, first of all that it was completely inappropriate for him to answer questions on the President and his daughter’s businesses, but furthermore, and this is the actually more interesting part, that the supply chains and scalability for production, are not always available in the United States. So according to Sean Spicer, the reason that Donald and Ivanka Trump are having their products made in again, almost sweatshop-like conditions in factories in China, is because here in the United States we don’t have the supply chain to make these things? We don’t have the capacity to manufacture ties and shirts and shoes? Because that’s what Sean Spicer implied with his answer.

Here in the United States we simply, we can’t make stuff, what are you crazy? We don’t have cloth and fabric and sewing machines and workers? That’s just insane. No, Sean, I think the answer you wanted to give, the answer that you know is the truth, is that the reason Donald and Ivanka Trump are having their goods made overseas, paying workers $1 a day, when the living … or, excuse me, mandated wage is actually $5 a day, the reason they’re doing that, is because it’s cheaper. So that when they bring those horrible products back over here to the United States, sell them at super inflated price, they get to pocket more money.

That is the only reason, why American companies, including the Trumps, send their goods to be manufactured overseas, then brought back here for sale, because it’s cheaper to do it over there, you can get away with far more labor violations overseas, and you can pay people less. It’s a win-win if you’re a corporation, you pay less in wages, you get more in return. And it’s also unethical and un-American to do that. Sean Spicer knows that, there’s no way he can’t understand that.

Donald Trump knows that, as he proclaims this week to be Made in America week, when he himself doesn’t even abide by those rules. He doesn’t even believe in the thing that he is pushing. He just wants people to think he’s some uber-patriot that loves this country so damn much, encouraging all of us to go out there and support American made businesses. As I’ve already pointed out before, we already do that, okay? Why are we not having our videos produced overseas, and then shipped back over here because it’s cheaper? We’re doing this on American soil folks.

Trump doesn’t understand that and Spicer’s job is to go out there and lie to the public about this. If Donald Trump cared, he would take this minor hit in his profits in order to bring production of those goods back to the United States, where he can employ American workers, using American fabric, American sewing machines, American leather to make their shoes, yeah his profits would dip slightly, but think of all the jobs that could be created if Donald Trump and Ivanka Trump simply brought the production of their own lines of clothing back over here to the United States.