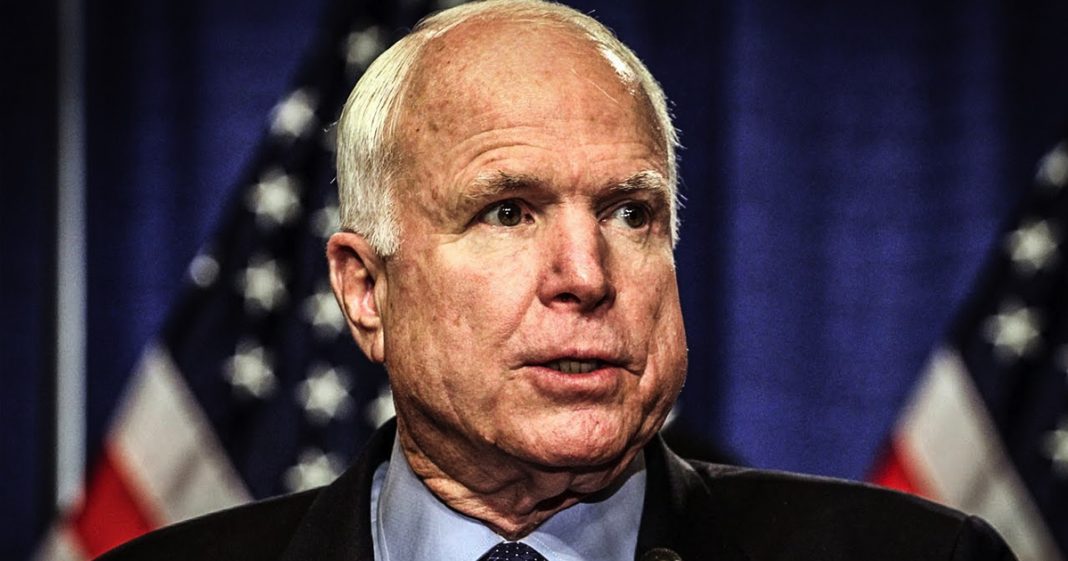 In a move that couldn’t display the hypocrisy of Republicans any more perfectly, Mitch McConnell announced that he would be delaying the Senate vote on the Obamacare replacement bill because John McCain was in the hospital following eye surgery. They won’t grant those kinds of favors to the American public under their plan, but they get all the special treatment they want. Ring of Fire’s Farron Cousins discusses this.

Republicans were all set in the Senate to vote for their disastrous health care bill this week, until Mitch McConnell announced a few days ago, that they were actually going to have to delay the vote, because one of their own was in the hospital. Specifically, John McCain went in Friday to the hospital to have a blood clot removed from his eye, and he was recovering. And since they need his vote in order to pass this health care bill, they’re going to delay the vote so John McCain can recover, and come back to the Senate. Isn’t that nice? Isn’t that a nice thing they’re doing for their colleague, who is in the hospital? Got sick, needed something fixed, so they’re just reworking everything they’re doing around that one sick person, so that he doesn’t have to miss anything important? So that he doesn’t lose his job because he was sick.

The average American does not get that same kind of benefit. If we get sick at work, we are not guaranteed by any law, any form of paid sick leave. The United States is one of the few countries, few developed countries in the world, that does not guarantee paid sick leave. Furthermore, the fact that John McCain was in the hospital to have a blood clot removed, is something that most of us won’t even be able to do if the Republicans pass their plan, because we’re not going to be able to afford it. Their plan is going to take coverages away, so even if you still get insurance, it’s not going to cover as much. A blood clot eye surgery, I can promise you, is not something that’s on that list, especially if it’s not life-threatening.

So Republicans, in all of their hypocrisy, do not understand why people would be so bent out of shape about this. But to be honest, I’m glad they’re delaying the vote. Let’s keep delaying it. How about every member of Congress and the Senate go ahead, go to your doctor, get whatever kind of voluntary surgeries you need out of the way, we’ll just delay, delay, delay, delay, delay, until we hit the 2018 midterms, and then you idiots are voted out of office. Because your plan is an absolute disaster for the American public. We will not get the same protections as you. You’ve already exempted yourself from this piece of legislation. That’s probably one of the reasons why John McCain’s surgery was still covered. Because he knows you’re not going to get the same crappy care that you’re giving to the rest of us.

Republican hypocrisy knows no bounds. They do not see the irony in this entire situation. They do not see that it’s wrong that they get better protections, better jobs security when they have to leave to go have surgery, than the rest of this country. All they know is that they want to keep John McCain healthy and alive long enough, so that they can pass their disaster of a health care bill, that is going to leave 23 million American citizens without any form of health insurance.