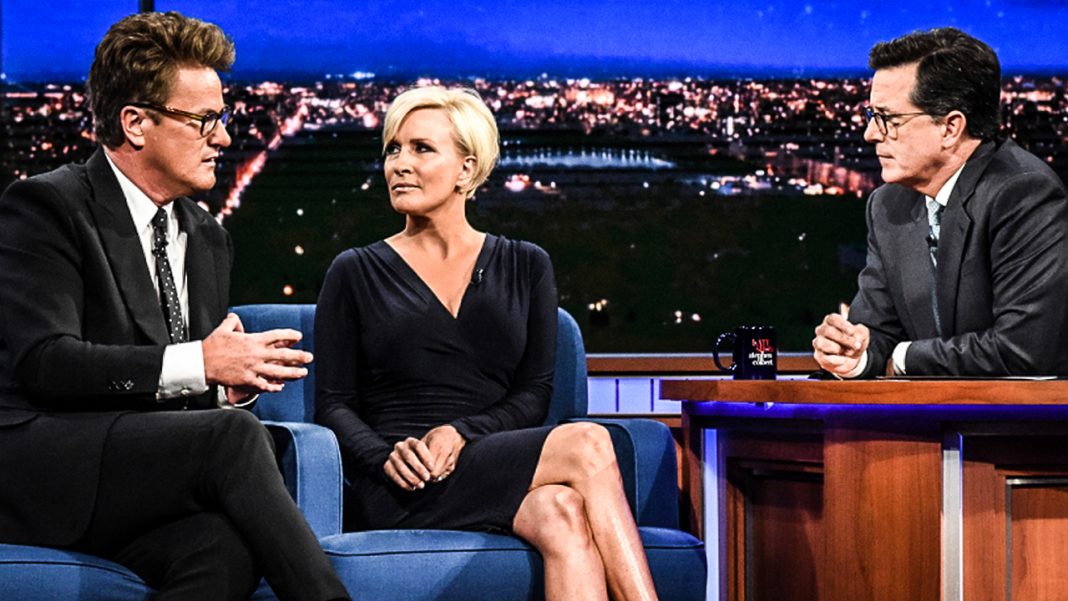 MSNBC host and former Republican Congressman Joe Scarborough announced on The Late Show with Stephen Colbert this week that he was leaving the Republican Party.  I don’t buy it, and you shouldn’t either.  Scarborough wants to capitalize on anti-Trump viewership.  He has always been a loyal Republican, pushing for privatization and elimination of social safety net programs during his days in Congress, and that’s exactly what today’s GOP is all about. Ring of Fire’s Farron Cousins discusses this.

MSNBC host and former Republican Congressmen Joe Scarborough announced earlier this week on the Late Show with Stephen Colbert that he was leaving the Republican Party. Apparently he’s just so disgusted with Donald Trump and what Donald Trump is doing that he can no longer bring himself to call himself a Republican. My response to that is, bullshit. I don’t buy it for one second. There is nothing that Donald Trump is doing today, with the exception of obviously the potential collusion, that other Republicans have not wanted. Donald Trump, his policies themselves, are everything that the Republican Party has stood for, for decades, but furthermore, Donald Trump is pushing the very same policies that Mr. Scarborough himself pushed when he was in congress in the 1990’s.

See, a lot of people tend to forget that Joe Scarborough served as a member of the United States House of Representatives for many years. We have a voting record we can go back and look at, we have policy proposals that we can go back and look at. You know what Scarborough wanted to do when he was in congress? Well he wanted to privatize the Departments of Education, Department of Energy, every federal agency, he wanted to privatize, sell it off to corporations. He wanted to cut funding for public schools. He says he wanted the states to be in charge of that, which as we know, states do not have as money as the federal government, so that would have resulted in a massive cut to public education.

Newt Gingrich himself loved Joe Scarborough so much that he put him in charge of several policy positions, several policy groups, because he understood that Scarborough was a hard line, right winged Republican, and by God, he was going to get it done. He wanted tax cuts for the wealthy, he wanted everything privatized. He wanted to cut Medicaid, and cut Medicare, and increase our prison populations. If that all sounds familiar, it’s because that’s exactly what republicans today are trying to do. They haven’t changed, and Joe Scarborough has not changed.

Now, as a matter of full disclosure, Joe Scarborough at one point, between his congressional career, and his MSNBC career, did work at the Levin Papantonio Law Firm with Mike Papantonio, which is where our studio here is located. I don’t want anybody coming back and saying, “Yeah, but you’re working in the same office as Scarborough.” I was not here during the time of Scarborough, and I do not respect what Joe Scarborough is. I do not respect what he is doing. He is trying to jump on the anti-Trump bandwagon, because he sees how successful the other MSNBC hosts are being by attacking Donald Trump. He just wants to jump in on it.

Then the next day, after he says he’s no longer a Republican, you know what this little pander bear did? He tweets out a picture of Mika taking a selfie with Bernie Sanders. Can you get anymore transparent than that? This man is setting himself up for something bigger. Maybe, just maybe, he’s trying to say, “No, I’m not a republican anymore, I’m a Democrat and I want to run for president.” I wouldn’t put it past him, but you should not buy into the lie that Joe Scarborough has suddenly seen the light. He does not care about the average Americans, he cares about ratings. He doesn’t care that republicans are pushing a policy that’s going to cut taxes for the wealthy while starving the poor, because he pushed those same damn policies when he was in office. He doesn’t care about you, he wants the ratings. He wants to potentially run for office again some day, and that is what his change of heart is all about.