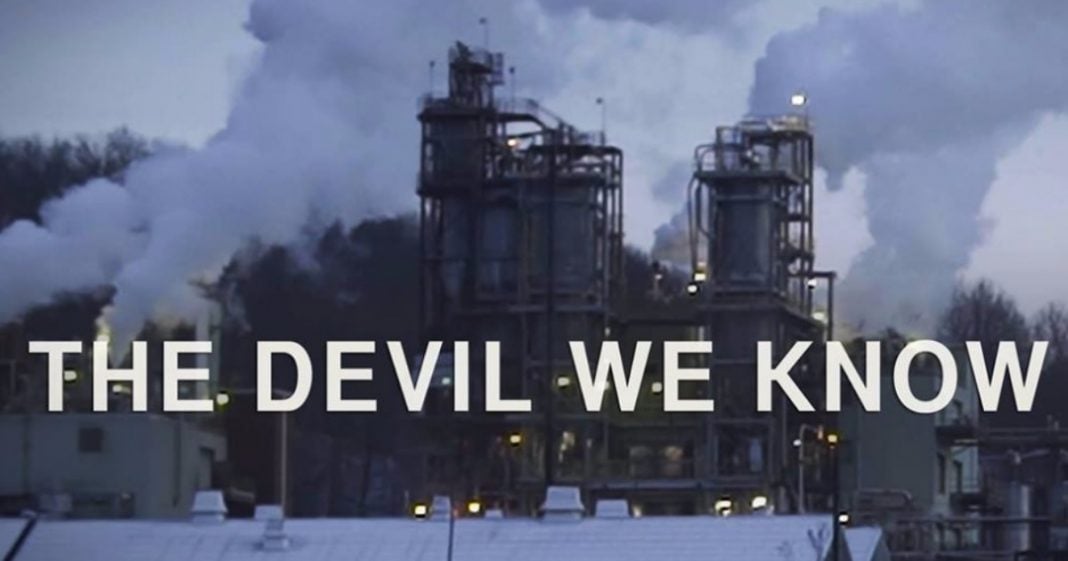 At the Ring of Fire Network, we have long followed the ongoing saga between chemical corporation DuPont and the legal system as injured Americans seek justice and transparency regarding the company’s dangerous products.

Now, a documentary on the subject is being created, thanks to an ongoing crowdfunding effort on IndieGoGo. From the documentarians and filmmakers who brought us “Super Size Me,” “FED UP,” and “GMO OMG” comes “The Devil We Know.”

A new documentary is exposing the dangerous chemicals in our water and homes. Watch Mike Papantonio in this clip from @DevilWeKnowFilm pic.twitter.com/W2MiQRwIL7

“The Devil We Know” is set to focus on the case against DuPont from a group of regular Americans in West Virginia who sought to do the near-impossible: win against a corporate mammoth who has spend decades getting away with unspeakable crimes.

The West Virginia case focuses on DuPont’s wanton dumping of a toxic, cancer-causing chemical known as C-8 into local water supplies. As families and individuals fell sick, it soon became clear that much of what ailed them was the direct result of DuPont and its business practices.

What’s more, DuPont was well aware – for many decades – that what they were dumping into the water was incredibly harmful to the American body. So harmful, in fact, that they required their employees to wear protective gear and barred pregnant women from working at the facility. Meanwhile, the public was given no notice about the toxicity of their water.

Still, despite research and evidence that C-8 was harmful, DuPont found it economical to dump the waste product into the nearby rivers, which flowed downstream and now lives in more than 98 percent of organisms on earth.

While avid readers of the Ring of Fire Network may be educated on the shocking subject, there are still many in America who have no idea what this massive corporation has gotten away with. Donations can be made by environmental advocates and regular Americans who want the truth to be seen on a national scale.

So far, the fundraising effort has received 32 percent of their stated goal, and will come to an end August 2.