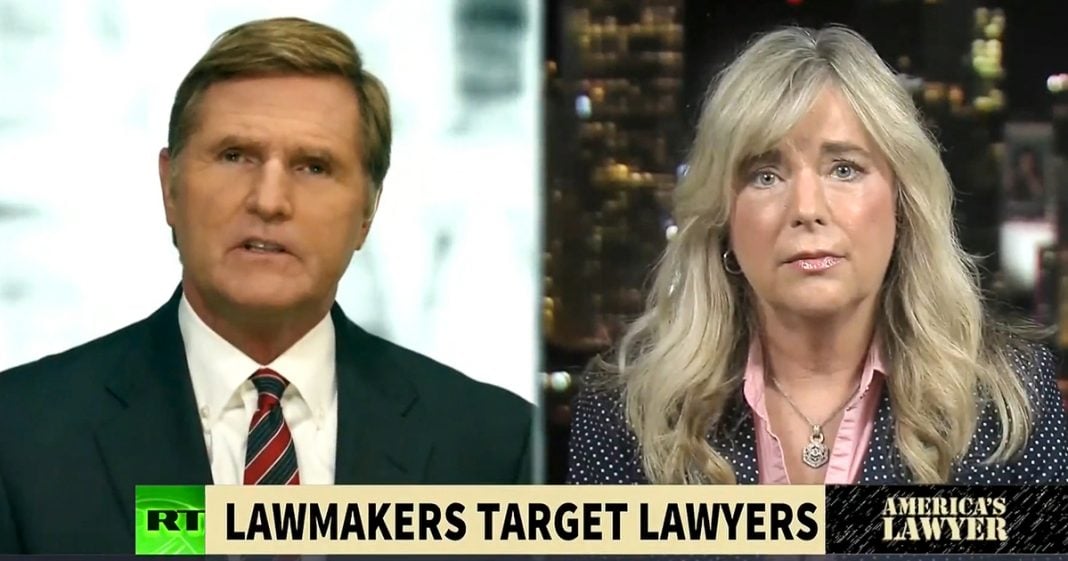 Via America’s Lawyer: Mike Papantonio discusses how Tort reform was sold to the American public with two big lies that made healthcare expensive and speaks with attorney, Virginia Buchanon, about medical malpractice caps congress wants to impose on people.

Papantonio: In 1971, future Supreme Court Justice Lewis Powell drafted a memo to the US Chamber of Commerce laying out a path for businesses to follow that would allow corporations to gain massive influence over the U.S. government. He told them that they needed to focus their attention on electing pro-corporate politicians, but doing so meant they’d have to diminish the influence of consumer groups. And the one group that Powell singled out more than any other was consumer trial lawyers. In his memo, Powell called for the creation of astroturf groups whose sole purpose was to demonize trial lawyers.

The US Chamber of Commerce obliged by creating The Institute for Legal Reform. Their goal was to paint consumer lawyers and consumer advocacy groups in a negative light so that people would begin to develop deep feelings of anger towards those legal professions. They wanted Americans to regard consumer lawyers and consumer advocacy groups the same way they regard politicians. They helped create the image of purely self-serving lawyers looking to make a quick buck off human suffering.

Turning the public against lawyers and advocacy groups was just the first part of their plan, and once they had the public believing that lawyers could not be trusted, they began to push a policy called “tort reform.” Tort reform was sold to the American public as a way to control costs and take money away from “greedy” consumer lawyers and give it back to victims. But what it actually does is shelter negligent individuals from having to pay for the harm they inflict. In otherwords, corporations kill and cripple you and your family and get away with it.

Two of its most successful lies are that tort reform will lower costs for health insurance and medical services. Based on these lies, the state of Texas enacted medical malpractice tort reform in 2003. In addition to lower healthcare costs, Texans were also promised that they’d still get the same quality of legal care if they were victims of medical malpractice. Both turned out to be lies. In fact, not only did it not lower the cost of medical services, but payments to doctors from programs like Medicaid and Medicare actually increased, meaning that taxpayers are paying more for the healthcare of Texas citizens.

The real winners were big pharma and criminal caliber corporations that put zero value on consumer health and safety. Now those same lies told to Texans are being recycled to bring that same kind of legislation to the federal level. Shortly before their July 4th recess, the House of Representatives passed the “Protecting Access to Care Act,” which imposes the same kinds of limits on medical malpractice lawsuits that Texas enacted. And again – they sold it to the public making promises, where evidence has proved to be just the opposite.

But this is not just an attack on consumer lawyers – this is an attack on American consumers. Corporations, doctors, and politicians are trying to limit your ability to hold them accountable for their negligence, while selling it to you as something that will save you money. Really? Those are all lies brought to you by your friends at the U.S. Chamber of Commerce.

Virginia: Michael, this legislation that you’ve been discussing is very frightening in the breadth of attack that it creates for consumers, for people who have claims. The most serious of claims, life threatening injuries, death, loss of children, brain injury, whatever across the board they’ve proposed a $250,000 cap for noneconomic damages. What that means is a paralyzed person, a person who’s lost a breadwinner in the family, a mother who takes care of the children, $250,000 regardless of the degree of negligence shown. It truly is exactly what you said, an attack on the consumer. Not just an attack on attorneys.

They’ve proposed a one year statute of limitation which is much shorter than most states allow. And it really usurps the state’s rights and the supreme court said the state to regulate and evaluate legislation on medical malpractice caps. Most states have rejected such efforts in the past. This is an effort to get around those states and their legislatures and their supreme courts and force on all of the states this limitation in consumer rights. Grossly unfair, very far reaching limitations-

Papantonio: Virginia let me ask you, what happens to the ability of a patient to file suit when these kind of caps are put in place on malpractice suits? I mean what are they left with? To me as I look at this, Virginia, the hospital corporation, that’s what we usually see, not just doctors. We see hospital corporations are increasing the level of malpractice in this country. Incredible, incredible increases. So what I’m wondering is, so a hospital corporation is responsible for leaving somebody blind or disabled for the rest of their lives for something they’ve done, are taxpayers just supposed to take up the slack that we’ve had in the past where the hospitals themselves have been responsible? What’s your take on that?

Virginia: Exactly right. You’ve hit the nail on the head. The hospital and the insurance carrier get to hold on to their money. The disabled person with all of their dependent children are uncared for by the responsible party and we the public have to pick up that tab for that. And the people can file their suits, they can make a claim for all their damages, but they will never recover their full damages. They will get only a fraction of their damages. And this is something that’s irrefutable. You could get a multi-million dollar verdict, well deserved, huge damages, and then it just would be cut to $250,000. And from that fees and costs have to be paid, leaving the injured person with very little. And many lawyers won’t take those cases. People will be handling other types of claims. And the hospital and the insurance carriers will get the full benefit of that.

Papantonio: So an individual checks into the hospital, they’re an artist, okay? They’re an artist. They lose their eyesight, they can argue well they’re gonna be paid economic damages, but pain and suffering that that person goes through for the rest of their life is limited to $250,000. Now the state of Texas has had these same malpractice tort reform laws on the books for about 14 years. Can you tell us what happened in Texas as a result of these laws? What’s going on over there in real life?

Virginia: Yes. A horrible fiasco that continues to be played out. And we know this from the research that’s been done by Professor Black at Northwestern University in Chicago. He studied all of this. All of the allegations that were made that identified supposed problems. All the relief that was expected to occur, doctors would stop doing defensive tests to try to prevent losses. Doctors would stop leaving the state. Doctors would be paid more. We’d all have better healthcare in Texas. All of that has fallen by the wayside. There’s no question about it, costs are increasing, tests continue to be done because physicians believe they’re appropriate. Doctors have not returned in droves to Texas as had been predicted. In fact they found that wasn’t the problem at all. There were just fewer people going into medicine and beginning practice in Texas. So all of it was a big lie.

Virginia: It didn’t lend any relief.

Papantonio: Right. That on top of the fact that insurance companies are just absolutely pillaging the medical community. And congress won’t do anything about that. Look a few months ago researches said that preventable medical errors have become the third leading cause of death in the United States. So I mean first of all that’s a startling number, the third leading cause. What is your take on that issue in general?

Virginia: Well it really begs the question, you could insulate them from all liability. And the sad thing is if errors are occurring like that what a staggering loss of human life and human productivity that is occurring. Why aren’t we spending those efforts to try to improve medicine? To try to prevent the errors to begin with? We have so many smart people, why don’t we come up with a solution to the problem so there aren’t malpractice cases. That means there aren’t injuries. You don’t ignore the problem by insulating negligent people from liability, you try to prevent the negligence in the first instance. It’s common sense. First graders could tell us this if we laid the story out for them. And yet we don’t do it. We just continue to allow insurance companies and hospital corporations to hold onto their profits and to let whoever falls victim to the negligent acts to deal with it and we as the public to support whatever damage has been inflicted.

Papantonio: Virginia, thank you for joining me. Hopefully you’ll still be out there on behalf of people who are injured in these types of cases.