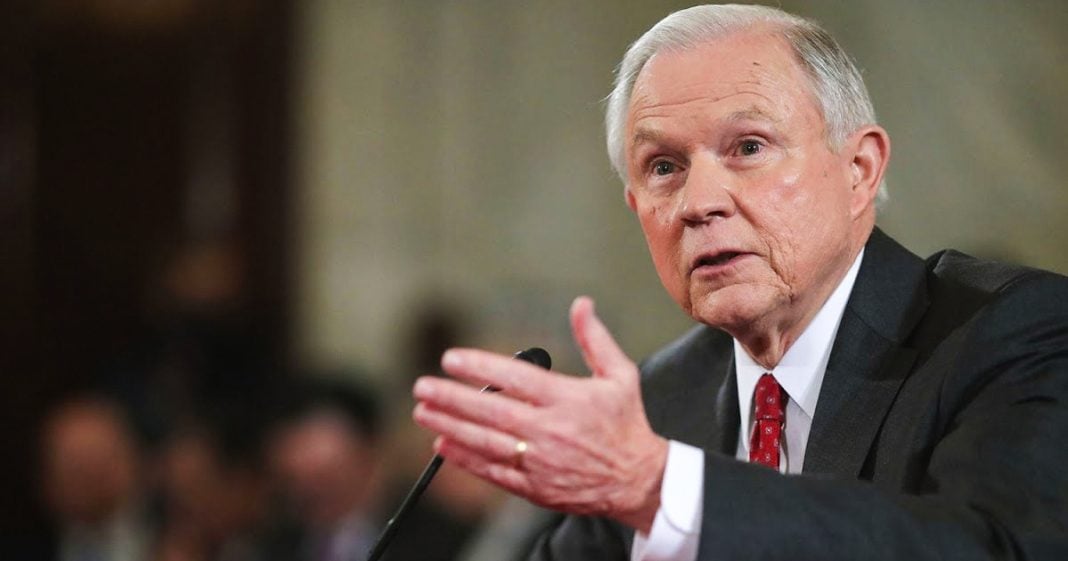 This past January, 61-year-old Desiree Fairooz, a member of Code Pink and long-time activist, was attending the confirmation hearing of current Attorney General Jeff Sessions.

At one point during the proceeding, Sessions claimed that he treats all Americans equally. Understandably amused (given Sessions’ record on civil rights), Fairooz laughed. That completely natural and involuntary reaction to Session’s ludicrous claim got her arrested and charged with “disorderly conduct.” At Fairooz’s request, the case went to trial in May, during which she was found guilty and sentenced to a year in jail.

Fairooz was vindicated just before the weekend however, when the Honorable Judge Robert Morin threw out her conviction…at least for now. In his ruling, Judge Morin expressed concern over the government’s argument that Fairooz’s laughter by itself warranted jail time. He was in agreement with Fairrooz’s defense attorney, who said his client’s “brief reflexive burst of noise, be it laughter or an audible gasp, clearly cannot sustain a conviction for either of the counts in the information.”

Ironically – and disturbingly – Fairooz was not the only one to laugh during the hearing. At one point, Sessions made a remark about disagreements with his spouse, which elicited laughter throughout the room.

According to Fairooz, one spectator even shouted, “You’re under oath!” That was apparently okay, but when Fairooz laughed out loud after GOP Alabama Senator Richard Shelby claimed Sessions’ record of “treating all Americans equally under the law is clear and well-documented,” that was another thing entirely. Later, a witness said Fairooz’s “disruption” was little more than a “reflexive gasp…I would barely call it a laugh.”

Nonetheless, it was enough justification for Officer Katherine Coronado – a novice with barely two weeks’ experience in her job – to escort her out of the room and place her under arrest.

During the brief trial, prosecutors claimed that Fairooz had been warned, but “grew loud and more disruptive, eventually halting the confirmation hearing” when Officer Coronado attempted to “quietly escort” her from the room. At that point, Fairooz became more vocal in her protest: “Why am I being taken out of here?” On the way out, she added, “[Sessions’] voting record is evil.”

However it went down, the entire affair is disturbing in light of the increasing criminalization of dissent under the Trump regime. Judge Morin made the correct decision in throwing out Fairooz’s conviction. However, there is a catch: he has ordered that Fairooz once again face trial. On the surface, this order would appear to violate the double jeopardy clause, outlined in the Fifth Amendment: “Nor shall any person be subject for the same offense to be twice put in jeopardy of life or limb.”

The operative phrase here is “same offense.” What happened the first time could have been declared a mistrial; while the prosecuting attorneys believed that simply mocking their boss constitutes criminal behavior, there was uncertainty among the jurors.

One juror attributed Coronado’s overreaction to inexperience, saying “she was a rookie officer…I think it was her first time involved in an arrest.” The jury foreperson said, “We did not agree that she should have been removed.”

Some jurors felt compelled to convict Fairooz despite their feeling that the punishment was out of line with her alleged offense because of the broadness of the statute. Under the law, it is illegal to engage in “disorderly and disruptive conduct” intending to “impede, disrupt, and disturb the orderly conduct of congressional proceedings” – but there is no real definition of what constitutes such behavior.

When Fairooz goes back in front of a judge, the question of what she actually did or did not do will be chiefly considered – and more importantly, whether or not she willfully intended to disrupt the confirmation hearing, or was simply reacting to being summarily hauled out of the room and arrested for understandably chuckling over Sessions’ absurd claim.

The new trial will be scheduled in September.