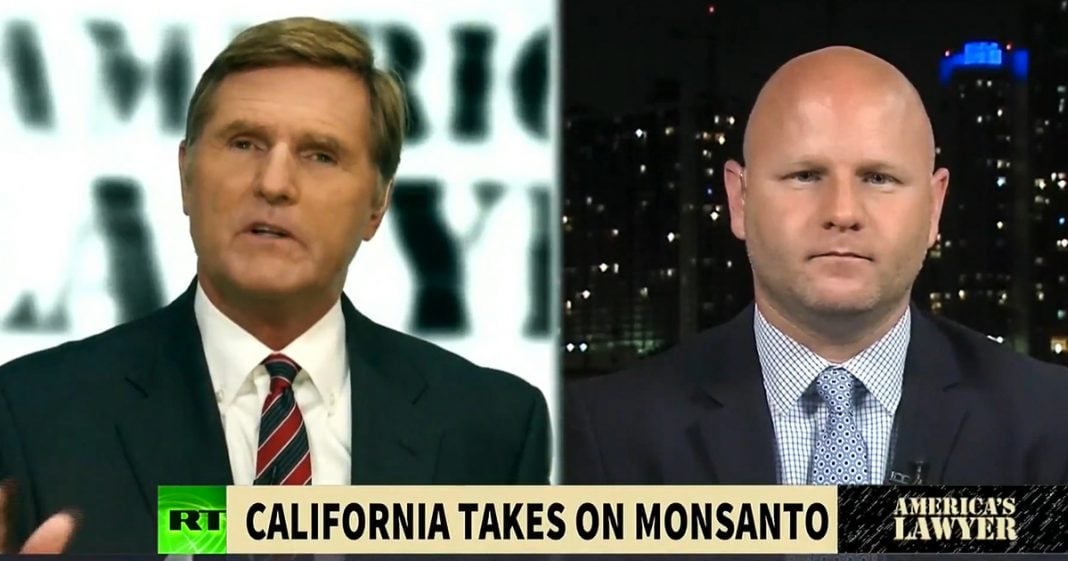 Papantonio: The state of California took action against the toxic profiteering of Monsanto by putting glyphosate on its list of cancer-causing chemicals just last week. This happened after the state Supreme Court denied an appeal for Monsanto to delay the decision, which was made by the state’s environmental office two years ago.

Joining me now to talk more about this is Farron Cousins. He’s the executive editor for the Trial Lawyer magazine. Farron, tell us, what is the whole story behind this battle between California and Monsanto?

Farron: This is a battle that’s actually been going on for quite a while in the state of California. Monsanto tried to fight this decision by the state earlier this year. So far, they’ve failed. Now, they are appealing the decision of the state to go ahead and label glyphosate as a probable human carcinogen.

But if what’s happened in the past with them is any indicator in the state of California, they’re likely going to fail because the state of California understands science. That’s something that Monsanto has had working in their favor in the past because they’ve been dealing with government agencies that are willing to put science aside and go ahead and side with industry in matters like we’ve seen with glyphosate, we’re seeing with chlorpyrifos with Dow in recent months. We finally have a state that’s standing up to industry and saying, ‘Nope, we’re going to go ahead and listen to the scientists, go with the scientific literature on this, rather than bow to big business like everybody else seems to be doing today.’

Papantonio: Well, for example, the EPA. What an ugly story here. This is an ugly story. The EPA comes out. First of all, they say, when they first start looking at this they said, ‘This will cause cancer.’ There wasn’t any question. Six years later, the company then puts in their political influence. They call on legislators. They call on the media, ‘Oh please help us.’ They call on the White House even. Then EPA changes their story and says, ‘Oh no, we were wrong. It doesn’t cause cancer.’ But what does it mean for Monsanto now that this decision has taken place? How is it in the interest of California residents?

Farron: Well, it’s obviously in the interest of California residents because it prevents them from being exposed to certain levels of this dangerous chemical that scientific studies are showing us, ‘Yes, it is causing non-Hodgkins lymphoma in people who are exposed to quantities of this.’ We don’t necessarily know the threshold yet, though, of those quantities, how much is toxic, because so far the studies have mostly just looked at more of the blanket, ‘Will this cause this particular disease or this illness in any level?’ That’s what we’re looking at right now.

But back to your story, though, about the EPA first initially classifying glyphosate as a probable human carcinogen, six years later coming back and saying, ‘Well, no, we’re going to say that it’s not a human carcinogen.’ It actually happened around the same time that Monsanto had developed their Roundup-ready, GMO crops that they were trying to get people to start planting all over this country.

Of course, they needed to sell Roundup by the bulk at that point, so they ramped up their lobbying efforts in the early ’90’s. They met with politicians, as you pointed out. They paid big, big money to influence those in power to finally come out and bury the science and say that, ‘Okay, even though we already told you it causes cancer, we’re going to go back now, take it all back, ignore our previous studies that we conducted ourselves, and go with industry once again on this because you’re spending big money and you’re talking to the right people.’ California just threw all that out the window.

Papantonio: Farron, you look at some of these commercials. They’re almost laughable. Some cat holding glyphosate in his hands and spraying just about everywhere. Like, ‘Oh, gee, this is just like water.’ The truth is the World Health Organization has said it will cause cancer. It will cause a lymphoma that will kill you. All of a sudden, the EPA now looks like a bunch of boneheads because they allowed all this to happen. They’re trying to defend themselves and say, ‘Oh, gee whiz, how could we know?’ Well, the way you could know is to look at the studies, and they had the studies.

Now I think it’s really interesting, Farron, that Monsanto is saying, ‘We’re not going to release the studies to the public because these are our trade secrets.’ Have you followed that where now the question is being asked, ‘What did you lie about? What did you cover up here?’ Questions are being asked. We’d like to see the studies and now Monsanto is saying, ‘Oh no. Gee, we can’t give you those studies. Those are our studies.’ We know what’s in the studies, don’t we? Go ahead, what’s your thought.

Farron: Oh, absolutely. That’s why these lawsuits against Monsanto right now over Roundup are so important because that is the only way the public is going to understand what the company knew, when they knew it, and how they covered it up. That is one of the most important things about most of the lawsuits that we see today. It’s educating the public because we will not get that information from the company without a court forcing them to come forward with it.

We do know, however, what all of the independent studies have shown, what the EPA’s own studies have shown, and that is that, yes, glyphosate is most likely causing cancer in people because we know that it causes DNA damage and actually rewrites the DNA in the lab animals on which it has been tested. It alters a living being’s DNA. We also know that it takes as little as 30 minutes after exposure to Roundup for it to be visible and detectable in the bloodstream of a human being. 30 minutes to go from being around it to having it detectable in your blood.

Papantonio: Farron, this is the thing that absolutely viewers don’t understand. We’ve got to talk about this. We see these commercials. Monsanto’s spending gazillions of dollars selling Roundup. What are the chances that some cat on the 50th floor of MSNBC, for example, is going to say, ‘Let’s do a bad story on Roundup?’ Then the guy that’s actually bringing in the money saying, ‘Well, you can’t do that story because they’re bringing in too much advertising dollars.’ Haven’t we seen that conflict with Roundup and Monsanto for a decade now, where they’ve basically, the media has been part of the cover-up? Would you agree with that or is that an overstatement?

Farron: Oh, they absolutely have. In fact, that’s something that I’ve written about. When that WHO study, the WHO study originally came out and said, ‘Yes, it is a probable human carcinogen,’ there was actually a sub-panel within the UN that said, ‘Maybe it’s not based on these studies.’ The media jumped on the subcommittee and said that, ‘WHO declares Roundup to be not a human carcinogen.’

What they didn’t talk about, though, was that in those studies, they relied on reports and studies from the glyphosate task force, which was a group created by Monsanto. They immediately mislead the public, put them on the path towards destruction, because Monsanto is a huge advertiser in the corporate media, and they absolutely will not cover anything like the science that tells us that glyphosate and Roundup is absolutely a possible human carcinogen.

Papantonio: All right, Farron, thanks for joining us. Let’s stay on this story. It’s getting more interesting every day.