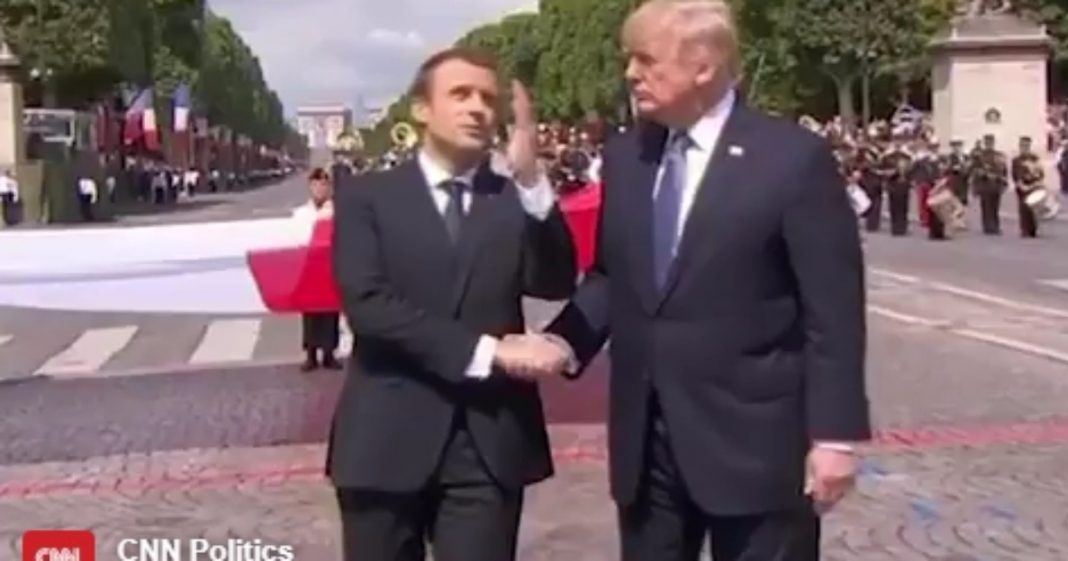 Though French President Emmanuel Macron emphasized his desire for friendship between the United States and France during his visit with U.S. President Trump this week, interactions between the two men seemed more like a power struggle than an earnest time spent between friends.

And nowhere was this struggle more clear than when the two men shook hands on Friday.

While saying their goodbyes on Friday, Presidents Trump and Macron shared a bizarre, long-lasting handshake that rivaled all of the other awkward Trump handshakes in the past.

The handshake was stunningly longer than the viral handshake between Trump and Japanese Prime Minister Shinzo Abe, which was also extremely uncomfortable and seemed to last for ages at 18 seconds.

Today’s record-breaker, though, lasted for 25 seconds. During the prolonged palm contact, Trump greeted the First Lady, shaking her hand as well, then gestured for his wife to join the group, making an odd foursome.

Now I know we’ve seen some gnarly handshakes, but believe me when I say that this handshake takes the cake – foremost because it lasted so long that it was more like a limp game of arm wrestling, or a tense hand-holding between world leaders.

Ok, enough talking about it. Watch:

Lest you be tempted into thinking that the overlong handshake is just a blunder or something not worth noting, please know that world leaders know just how much the common greeting matters.

Macron himself admitted that the handshake had significant importance.

“My handshake with him, it’s not innocent. It’s not the alpha and omega of politics, but a moment of truth.”

Others, like Canadian Prime Minister Justin Trudeau seemed to be well-prepared to take on Trump’s jerky handshake tendencies and managed to lock him in a firm, controlled shake.

During her visit to America, German President Angela Merkel was famously snubbed by President Trump for an official handshake. Though he later shook her hand, the lack of palm contact in an official capacity before photographers seemed an intentional slight.

Today’s handshake, though, seems to set a tone – by this time next year, will we have evolved to have 2-minute handshakes, or will politicians simply go the way of domestic dogs, sitting on one another for dominance?