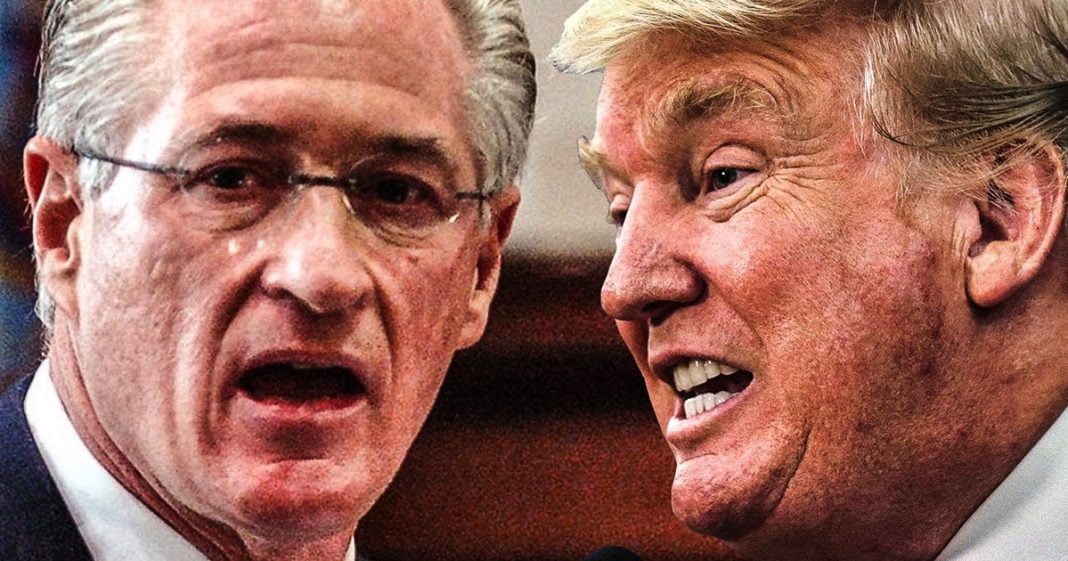 Donald Trump’s personal lawyer, Marc Kasowitz, went full psycho in an email response to a man who kindly asked that he recuse himself from the Trump/Collusion story. Rather than ignoring the email or responding with a well thought-out comment, Kasowitz decided to threaten the man, telling him that he knows where he lives and that he should “watch his back.” What else would we expect from Trump’s lawyer? Ring of Fire’s Farron Cousins discusses this.

In response to that segment a viewer emailed Donald Trump’s attorney, Marc Kasowitz, who is Trump’s personal attorney in this whole Russia thing, emailed him and said, “You need to resign.” It was a well thought out, polite email, but basically saying, “You’re too involved in this. You were involved in the scandal itself, according to the reports. You should probably recuse yourself and resign now.”

Kasowitz, however, had other plans. This man, this lawyer representing the president of the United States, do you know what his original response was to that man who emailed him? It was F you, except he actually said the word. Apparently that wasn’t enough. It was enough to just say that, so he comes back with this email, “And you don’t know me, but I will know you. How dare you send me an email like that. I’m on you now. You are fucking with me now. Let’s see who you are. Watch your back bitch.”

Donald Trump’s attorney, personal attorney, sent that email to a man who said that you should probably recuse yourself from this. You would think that that’s where it would end. You would think this man who is a respected professional, went to law school, made millions of dollars as a lawyer, you would think he would have a little more poise than that, a little more class. But no, he didn’t even stop there. He went on to say, “I’m Jewish. I presume you are too. Stop being afraid. Call me or give me your number and I will call you. I already know where you live. I’m on you. You might as well call me. You will see me, I promise bro.”

I don’t even know where to begin with this other than to say that this is clearly psychotic behavior from a desperate human being who has no business whatsoever serving as anyone’s attorney. Could you imagine getting that kind of email, or I can’t even say that kind, those kinds of email, from a respected legal professional who is working for the president of the United States. But at the same time isn’t this kind of what we would expect from a man representing a guy like Donald Trump? I mean, don’t similar personalities attract similar personalities? I could absolutely see Donald Trump sending an email like this to somebody, or at least Tweeting it out. Unfortunately this is the state of the Trump administration itself, anger, vitriol, hatred, irrational responses to criticisms.

Trump’s lawyer fits right in with everything that’s going on in the Trump administration, but at this point he might actually find himself in a little bit of hot water under harassment laws because you can’t email somebody and say, “Watch your back bitch. I know where you live. You’ll see me bro.” Sounds like a threat to me. Sounds like this man wants to inflict physical harm on the other man and is threatening and telling him he knows where he lives. If I were the guy who sent the original email politely asking for him to resign I would 100% be turning these letters over to the police and letting them handle this clearly deranged lunatic.