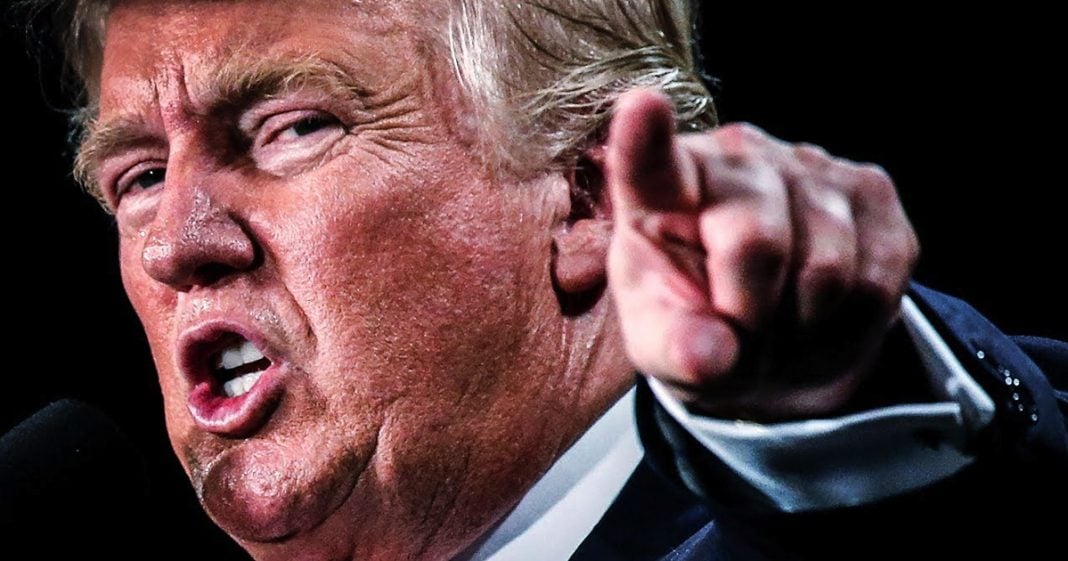 According to a report in Newsweek, Donald Trump’s rage issues have hit a tipping point this week after news broke about his son’s meeting with a Russian lawyer. Aides say that the president will not stop yelling at the TV and rage-tweeting, all while telling the public that his White House is functioning perfectly. Ring of Fire’s Farron Cousins discusses this.

People working within the Donald Trump White House understand that Trump is pretty much a dangerous individual because of his explosive temper and erratic behavior. Earlier this week, Newsweek reported that people within the Trump administration are growing even more afraid because, according to people that work in the White House, White House aides, Donald Trump will not stop yelling at his television. It’s because of all the coverage of the Trump, Jr., meeting and all the Kushner stuff, and the Manafort, and the Comey, and the Russia, and Trump’s lawyer. Everything right now is wall-to-wall basically negative about Donald Trump with the exception of Fox News. Donald Trump is so angry, so bitter, that he can’t control himself, and according to people in the White House, he is just screaming at the TV when he’s not rage-Tweeting.

What’s interesting about this is that Donald Trump is such a thin-skinned little, to borrow a word from the Republicans, snowflake that he cannot put his personal rage aside and function as a human being. Could you imagine what would happen if we got reports like this from the Obama White House? Was he screaming at the TV when people like Donald Trump were saying that he wasn’t even born in the United States, that his birth certificate was fake? That he’s from Kenya, that he’s a Muslim? That he’s palling around with terrorists? Could you imagine if Obama behaved in this manner?

No, he didn’t. You know why? Because he was a grown up. He wasn’t a man-child with the mentality of a toddler, angry that the commercials came on in the middle of his favorite TV show. Obama was an adult. He was mature and responsible. He understood that people didn’t like him and were saying these untrue things, and you know what he did? He ignored it. He joked about it because he didn’t care.

Somebody like him has gone through his whole life, having a white mother and a black father, people picked on him. It wasn’t easy for him. He put himself through law school, became President of the United States. He worked his way from the bottom to the absolute top. He took all the slings and arrows along the way. He understands that you can’t let every little thing bother you or else you’d never get anywhere in life.

Furthermore, for those people who work in the White House to have to live in a constant state of fear because they don’t know how Donald Trump’s going to respond at any given time to any given news … That is disgusting. That is unfair to those people. Yeah, they chose those jobs. They might stay there, but the job market kind of sucks right now so you can’t really blame them for that. But they are living in fear. They’ve admitted they’re living in fear. That’s what Donald Trump is and that’s what his disgusting, unstable personality is breeding within that White House.