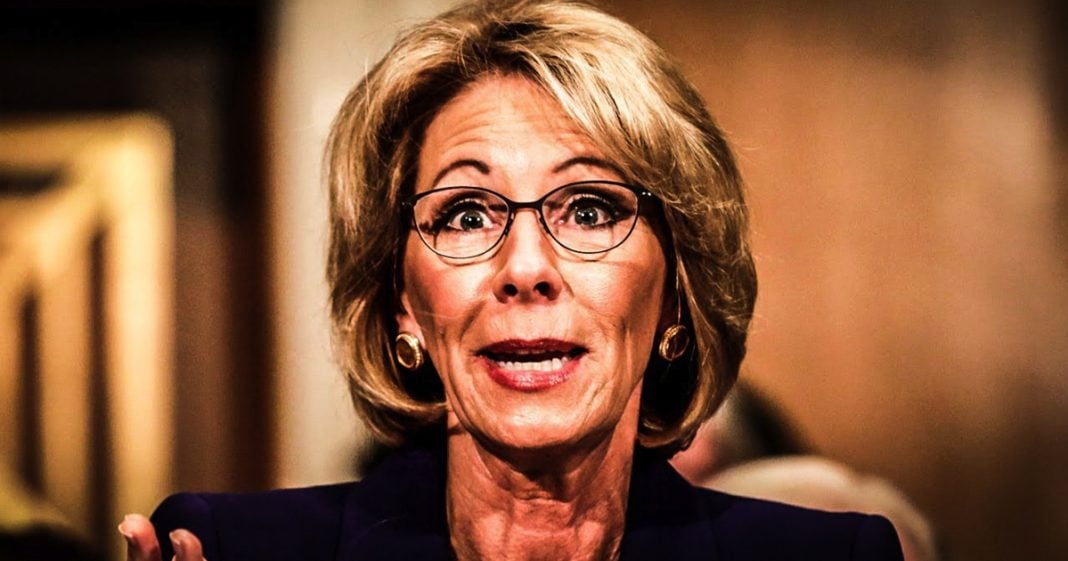 According to a “senior civil rights official” at the U.S. Department of Education, 90% of campus rapes are simply a case of “we were both drunk” and that women were overstating the issue in order to get back at their ex-boyfriends. Education Secretary Betsy DeVos met with men accused of rape, giving them a powerful audience to voice their defense while completely ignoring the victims. This is, by far, the most disgusting act we’ve seen from anyone inside the Trump administration. Ring of Fire’s Farron Cousins discusses this.

There’s no question that we’ve seen some truly disgusting actions and statements from the Trump administration, both during the campaign and since they have taken office. What happened this week, from Candice Jackson who is the acting head of the Education Department’s Office for Civil Rights, what she did this week, what she told The New York Times is by far the most disgusting thing we have seen yet out of anyone from the Trump administration.

According to Candice Jackson at the US Department of Education, 90% of campus rape allegations can be written off as, “Well, they were both drunk and then later on she regretted hooking up with that guy and filed phony rape charges.” That is what Candice Jackson at the US Department of Education told The New York Times. 90% of rape allegations from colleges are just women who, “Oops, I didn’t want to hook up with him after all. I’m going to say that he raped me.” Coming from a government agency, folks.

Also, Thursday this week Betsy DeVos decided to meet with some dudes who had been accused of rape. Get their side of the story, you know? Find out why we should believe them. Or basically, not even why we should believe them, go ahead give them the benefit of the doubt. This administration has gone from disgusting to outright cruel. Why is it that Republicans, and it is uniquely a Republican problem, why is it that they are so willing to give the benefit of the doubt to the guy, almost every single time? It’s up the woman to prove that she was raped before anyone will even take her allegations seriously.

I mean, I understand that in a court of law the burden of proof lies on the state. The accuser has to prove it. The tests have to prove it before a conviction can be taken. In this country, we don’t even go that far. We immediately assume, at least Republicans do, that the woman is lying about being raped. In many cases, even if we get enough evidence that proves she was raped, the man gets off depending of course on his family’s financial status and his race.

We have seen far too many well-to-do white college athletes in the last two or three years literally get away with rape, be convicted of it, but not get punished because the judges say, “Well, I don’t want to ruin his college experience.” That was literally the argument one judge used recently, “I didn’t want to ruin his college experience.” Meanwhile, the woman who was raped, her life is ruined.

Rape isn’t something you just shrug off and say, “Aw man, that was awful. I’m going to move on with my life.” It’s basically like having PTSD. It’s something, it’s a memory that will come back and haunt them, and they can’t even predict when it’ll happen. Walking down the street, lying down to go to bed, eating a certain meal. Anything can trigger that memory. That haunting, disturbing, disgusting action.

What doesn’t help it is when we don’t take it seriously. When we have our US Department of Education telling us that 90% of these women, right off the top they’re lying. They’re liars. These poor victimized men in this country. That’s what’s coming out of our federal government today. After what we learned about Donald Trump during the campaign, when that Access Hollywood tape was revealed, anyone, literally anyone could have predicted that this would be the stance his administration would take on the issue of rape.