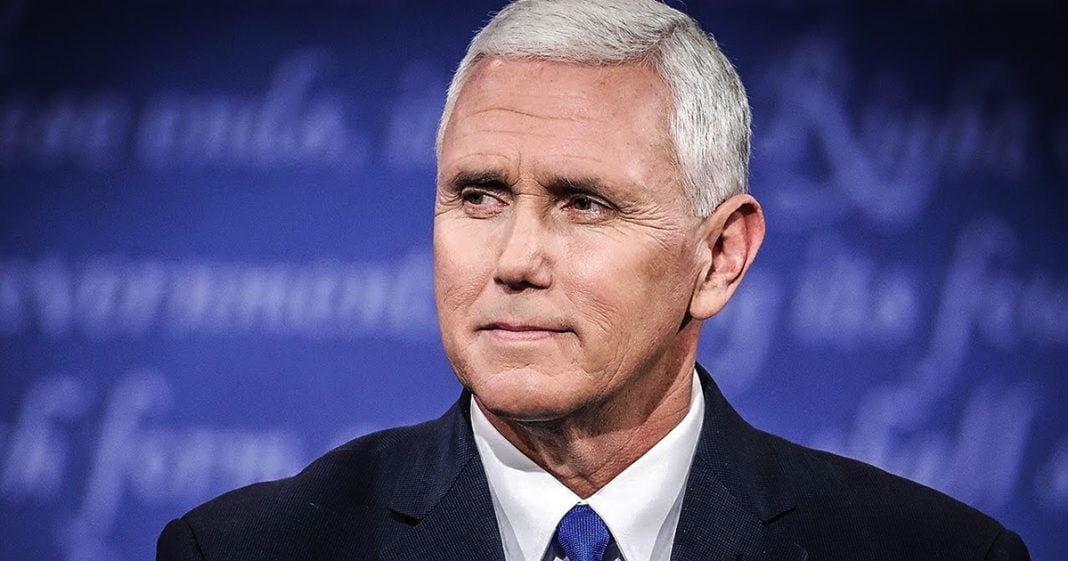 During a talk with students groups in Chicago, Vice President Mike Pence said that leaders need to be humble and exercise self-control, like Donald Trump. Clearly this man has not been paying attention to his boss’s behavior, because those are two qualities that Donald Trump certainly does not possess. Ring of Fire’s Farron Cousins discusses this.

During a speech this week to the National Student Leadership Conference, Vice President Mike Pence gave those students in the audience some pretty sound advice on how to be a good leader. According to Mike Pence, if you want to be a good leader like Donald Trump, you have to have humility, and self-control. Two things that, according to Mike Pence, Donald Trump exemplifies every day as President of the United States. Humble, self-controlled, well spoken, patient, good listener, those are all traits that Mike Pence listed out that you would find in good leaders to these students, and he said that those are all things that Donald Trump himself possesses.

Now, I’m not sure if Mike Pence has been paying attention to anything Donald Trump has done since the day he was born, but I do know that humility and self-control are two things that Donald Trump probably can’t even define considering his actions as a human being, even before he became President. I mean, when you talk about humility, being humble, Donald Trump has said countless times, both during the campaign, before the campaign, and since the campaign, since becoming President, that he is the best at blank. Go ahead and just fill in that blank with whatever, ’cause Donald Trump has already claimed to be the best at it. He has already claimed that he has gotten more done than any president since FDR, which is an absolute lie. He is the best negotiator, he is the best businessman, he runs the best campaign, he picks the best people. The list goes on and on and on, and as for self-control, I think we need look no further than Donald Trump’s own Twitter feed to understand that this man has absolutely no self-control whatsoever.

The danger here is that Mike Pence is out there talking to students, talking to the future basically. The people who will eventually take over and run this country, and yes, everything Pence said is true, they do need to possess those qualities, but Donald Trump does not possess them, Mike Pence does not possess them, hell, I can’t point to a single Republican elected official that actually possesses those qualities that Mike Pence says make for a good leader, which also leads me to believe that if those are the criteria we hold our politicians up to, then there isn’t a single good leader in the Republican Party today, and to be honest, a lot of those criteria also don’t apply to Democrats.

The bottom line is this. Mike Pence is either living in an alternative reality where his version of Trump is some kind of humble low-talker, who doesn’t like to be mean to anyone, or he is willing to just lie to every one of us in order to lavish praise on his boss, a man who we know favors people who praise him. At the same time, Mike Pence is also meeting with private donors in the Vice President’s house, he’s working with super PACs, he is essentially laying the groundwork for what could possibly happen should Donald Trump be impeached.

So we have two sides of Mike Pence at the moment. We have the Mike Pence who thinks he’s going to be taking over as President, and the Mike Pence who can’t help himself from lavishing praise on Donald Trump. He’s playing both sides of the field right now, and as anyone who’s ever seen this play out before, it’s going to come back to bite him one way or another.