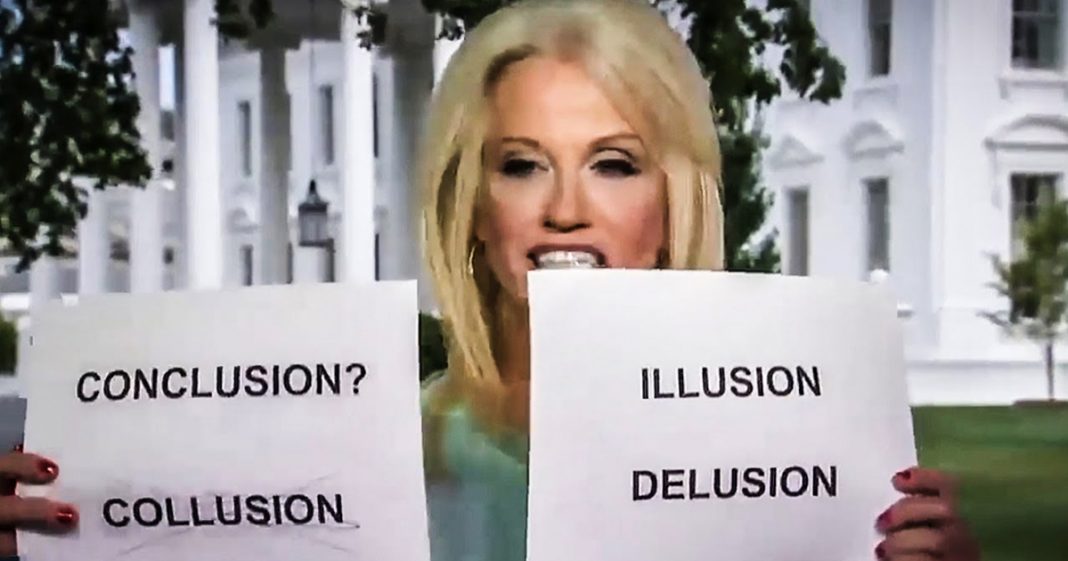 During an interview with Sean Hannity on Fox News Wednesday evening, White House counselor Kellyanne Conway decided to use visual aids to explain away the collusion story that has gained so much steam this week. Fittingly, the internet immediately jumped and made her into meme that is now making its way all over the world. Ring of Fire’s Farron Cousins discusses this.

White House counselor Kellyanne Conway decided to go on Sean Hannity’s Fox News program Wednesday evening to basically try to put to bed all of the people who were talking about the fact that Donald Trump Jr.’s email reveal showed that he was colluding with Russians. And she did it in the most juvenile way possible. Take a look.

Kellyanne Conway: So I just want to review, in case you run out of time. This is how I see it so far, this is to help all of the people at home. What’s the conclusion? Collusion? No. We don’t have that yet. I see illusion and delusion. So just so we’re clear everyone, four words: conclusion, collusion, no, Illusion, delusion, yes. I just thought we’d have some fun with words, so Sesame’s Grover word of the day perhaps Sean.

Kellyanne Conway essentially turned Sean Hannity’s show into an episode of Sesame Street for right wing idiots. After all, that’s basically what that television program is. I mean, when you’re holding up your little signs that you had printed out before you came there, you were just so waiting to get that zinger in and you managed to slip it in at the very end of the interview, that is what children’s shows do.
I have several young children, I have to watch these shows with them all the time. Next thing we know, we’re going to wait for Kellyanne Conway to look at the camera and say, “Can you tell me how many people are guilty of collusion? That’s right!” That’s what she was doing. To be honest, I don’t think it had anything to do with trying to be funny. I think it was because she understands that the Fox News Sean Hannity audience is so stupid that she literally had to spell it out on pieces of paper so that they didn’t have to worry their tiny little brains trying to connect those dots.
Yeah, you know what, I’m being a little insulting to the Fox News audience. To be honest, if anybody in this country deserves to be insulted, it’s the people who blindly accept the lies from Fox News as a fact, the people who blindly follow Donald Trump, believe that he cannot do anything wrong, and believe that this entire Russia fake news story isn’t real. Folks, I don’t care if you’re left, right, center, Libertarian, Green, or whatever. If you claim that there is nothing to this Donald Trump Jr. email reveal, or that there is nothing to this collusion story, you are lying to yourself and you are ignoring all of the facts available.
Anyone who denies it is lying. I will not take anyone who denies this seriously, unfortunately. There’s a lot of people, even on the left, who are telling us that this is still a big nothing burger. They’re lying to you, I don’t know why they’re lying to you, but they are. There is something to this story. We’re finding out more, essentially, every single week, it goes deeper and deeper, the ties, the connections to the Trump administration, get deeper and deeper. Anyone who says otherwise is right there on the same level of honesty as people like Kellyanne Conway.