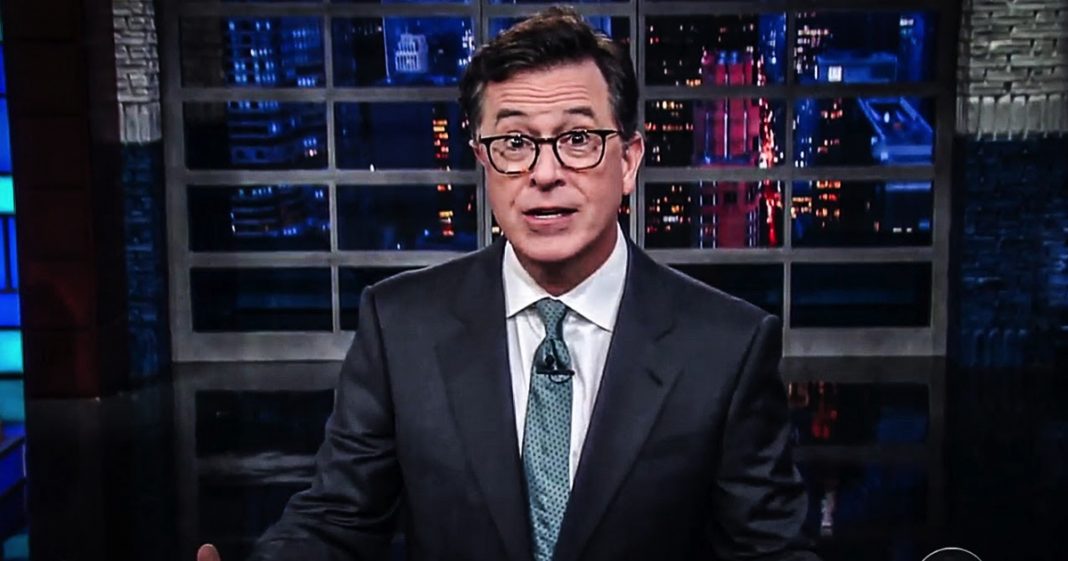 Stephen Colbert, host of The Late Show, skewered Donald Trump Jr.’s decision to leak his own emails showing how he worked with foreign agents to undermine the 2016 election in order to get dirt on Hillary Clinton, saying that the “nothingburger” Republicans have been talking about has now turned into an “all you can prosecute buffet.” Ring of Fire’s Farron Cousins discusses this.

On Tuesday evening’s episode of The Late Show with Stephen Colbert, Stephen Colbert decided he was going to talk about the Donald Trump Jr. scandal and put it in terms that every American citizen can absolutely understand. Take a look at how he approached the issue.

Stephen Colbert: We did not know what these emails are. We did not know these emails were even real. How would we ever see them? For that, Donald Trump Jr. would have to tweet them out this morning at 11 a.m. What? What are you doing? Who told him to do this? Does he even have a lawyer? Because you rarely see a cop show where the lawyer bursts into the interrogation room and shout, “Keep talking. In fact, tweet out everything you know. Come on.”

Yesterday, Reince Priebus said this whole story is a nothing burger. Well, these emails have turned it into an all-you-can-prosecute buffet.

What’s brilliant about what Stephen Colbert did was that he used the typical Republican talking point at this point, which is that this whole thing is a nothing burger, and turned it into an all-you-can-prosecute buffet because that is basically what we’ve learned from Donald Trump Jr.’s emails.

Further down in that monologue he explained even more, admitted that this absolutely was a smoking gun, but he did it in simple enough terms. He explained the issue very clearly, something that the corporate media is not doing, and laid it out for everybody in a humorous way, but in a serious way at the same time. To be honest, that’s one of the things that gives these late night comedians that have been absolutely skewering Republicans and the Trump administration, that’s what gives them an edge over the corporate controlled media. Because, yeah, they’re having fun with it and people are laughing along with them, and whether the audience realizes it or not, they’re learning about what’s actually happening in this country in very simple terms. That’s where they have the edge on this issue.

To be honest, this whole thing with Donald Trump Jr.’s emails, it’s not a nothing burger, as Republicans tell us. It is absolutely something. He admits in these emails, if you go through the entire chain, as Colbert explained, that he met with a foreign official, who does have ties to the Russian government and Russian spy agencies, he met with her with the sole intent, and that word is key, of getting information on Hillary Clinton and the DNC. He admitted it. He, like a bonehead, decides to tweet out those emails as if that’s going to help him. That is one of the things that people are having trouble grasping and, to be honest, I am too, is why Donald Trump Jr. would even bother putting these emails out there. Was it to scoop The New York Times so that they couldn’t report on it?

Well, you punked yourself there, buddy, because these emails are very damaging for your father, for his administration, and for the entire Republican party. You screwed the pooch on this one, buddy. You could have just waited for The New York Times to come out with their piece and then done what you and your father always do, which is say, “Oh, it’s fake news.” Your party would have believed you anyway. But now, you confirmed the evidence and the evidence shows that you attempted to collude with a foreign agent, basically with the foreign government, and that is the last little connection that needs to be made before we have a foolproof case of collusion at this point.

Contrary to what Republicans tell us, yes, collusion is in fact a crime. Working with an agent of a foreign government in order to subvert American democracy and in an attempt to gain something personally, that is the crime. Very clearly spelled out there, folks.

Stephen Colbert, Seth Myers, Jimmy Kimmel, Samantha Bee, those are the people that are actually doing the best job of telling these stories because they’re telling it in plain and simple terms that are very … it’s very much impossible to misunderstand what’s happening in the world when you listen to the way that these late night comedians explain it. They’re doing a hell of a lot better job than the pundits in the corporate media.