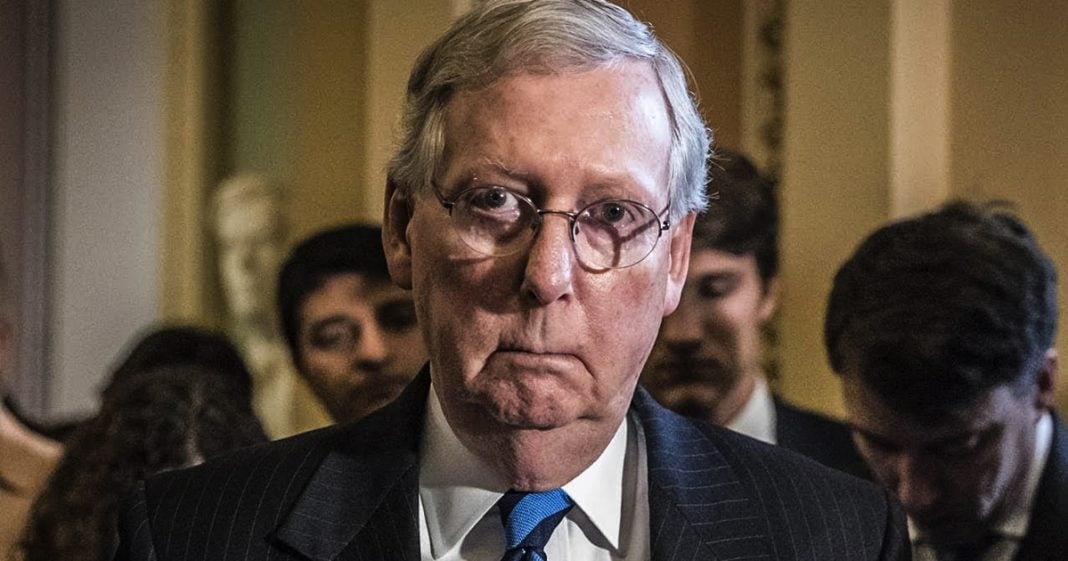 Senate Majority Leader Mitch McConnell has announced that the Senate’s August recess will be postponed by 2 weeks so that they can continue to work on their disaster of a healthcare bill. They’ve only had 7 years to work on their plan, so I’m sure those extra two weeks are really going to help. Ring of Fire’s Farron Cousins discusses this.

Senate Majority Leader Mitch McConnell announced earlier this week that the Senate is going to delay their August recess by two weeks so that he and his Republican cohorts can continue working on their disastrous Republican health care plan. Now according to McConnell, they’ve also got a couple other items that they need to take care of, potentially processing some of Donald Trump’s nominees, which both Republicans and the Trump White House are blaming on Democrats saying that they’re obstructing the entire process when in reality, Donald Trump has not nominated people for a majority of the positions that are currently available. Really the health care thing is the big project that Republicans are trying to work on.

Currently the Senate version of the legislation is stalled due to the fact that the ultra-conservative wing of the party and the slightly more moderate wing of the Republican party can’t come to terms on how many people we should kick off their health insurance plans because at the heart of it, that’s what this is all about. It’s not about Republicans not wanting to hurt people. It’s about the more conservative wing of the party wanting to cut funding for programs like Medicaid even further than the Senate bill already does. They’re not trying to make it better. They’re actually trying to make it worse. After seven years of complete failure to bring up any kind of plan to replace the Affordable Care Act, I’m sure that the extra two weeks Mitch McConnell is giving his Republicans in the Senate absolutely going to be more than enough time.

Think about it folks, seven years. Seven years Republicans have been whining and complaining about the Affordable Care Act, saying that they want to replace it with something else, and they couldn’t come up with a replacement bill. McConnell says, “All right, two more weeks.” After seven years, two more weeks ought to be what really gives us that little extra push to go ahead and do it. Now look, I usually am completely against the Senate and the House basically taking off the entire month of August. It’s not fair. Average American workers do not get that same benefit. It’s not fair that our government legislative body basically shuts down for an entire month out of the year. However, in this particular instance, I am firmly against the Senate postponing their recess.

Why? Because they’re postponing it to take away health care privileges from millions of American citizens, and to be honest, I shouldn’t even say health care privileges. The right to health care from 22 or 23 million American citizens is what’s at stake here. They’re going to stay back for an extra two weeks to figure out how to convince all of the Republicans in that Senate chamber to come on board with this plan that is according to experts, according to analysis of this legislation, it’s going to get people killed. Anywhere between 18,000 and 24,000 people a year will die as a result of this Republican health care plan. They’re going to postpone their vacation, their precious time off, just to make sure that they get this legislation passed so that tens of thousands of people every year die due to lack of access to health care coverage because Republicans took it away from them.