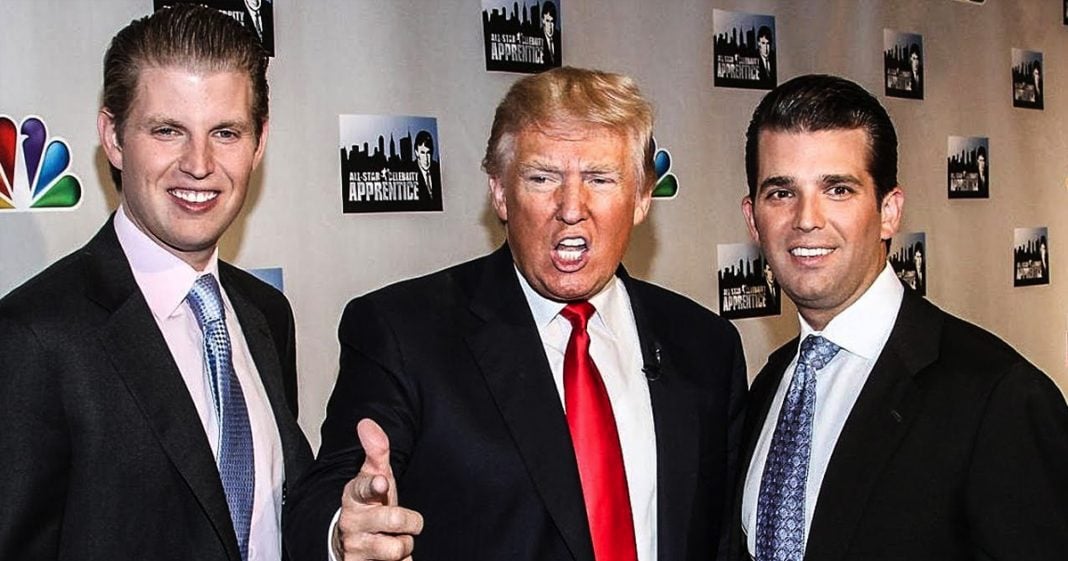 Eric Trump – who has basically become “the forgotten Trump” in recent weeks – took to Twitter yesterday to defend his family. According to Eric, the only reason that his brother, Donald Jr., is being attacked right now is because he supports his father’s presidency. No, Eric – your brother is being attacked because his actions are basically treason and his email release only further implicates your whole family in the collusion probe. Ring of Fire’s Farron Cousins discusses this.

Perhaps sensing that the media’s been ignoring him a little too much recently, Eric Trump, the forgotten Trump son, decided to jump into the fray into his brother and father’s recent, I guess you’d call it intelligence leaks. So Eric Trump decides to go on Twitter after his brother Tweeted out those emails incriminating himself in the collusion investigation, and Eric Trump says that, “The only reason people are attacking my brother is because he supports our father.” In Eric Trump’s [inaudible 00:00:36] little mind, the reason the reason his brother is attacked relentlessly by the media, by comedians, by bloggers, and even by Fox News to a certain extent, is just because he supports his father’s policies.

It has nothing to do with the fact that he leaked emails that are borderline implicating him in treason against this country. No. It’s ’cause he supports his dad and people just hate his dad, and so that’s why they’re being so darn mean to his brother. Eric, I know you’re trying to protect your brother. You’re trying to protect your father. To an extent I admire that. I hope my children have that same comradery. I also hope my children aren’t complete morons who break the law, admit to breaking the law by Tweeting out the documents, and then flat out lie about it.

I would hope that I have raised my children better than that. I would hope that my children know that if something is against the law, they will not go anywhere near it. Apparently that’s a lesson that your father and mother did not teach you, because your brother, yes, he appears to have broken the law. Obviously, I can’t say that he has broken the law until a trial happens and he is convicted, but the evidence is there, and there’s probably a 99.9% chance that he did break the law with this meeting, with his intent, because that is the key word there.

What was his intent? His intent was to meet with a foreign agent to undermine United States elections. That is the difference. Whether or not he got that information becomes irrelevant, because it’s all about that intent. Again, think of it as a sting operation. And now Republicans are out there telling us that maybe John Podesta and Hillary Clinton actually set up this meeting in order to set up the Trump administration. The lies are getting absolutely absurd. But the lies coming from the Trump supporters will never top those lies coming from the Trump family themselves, Eric Trump, Don Jr., and Daddy Trump. They are the king of liars in the United States, and Eric Trump just had to throw his own opinion in there so he could once again get lumped in with the rest of the Trump liar family.