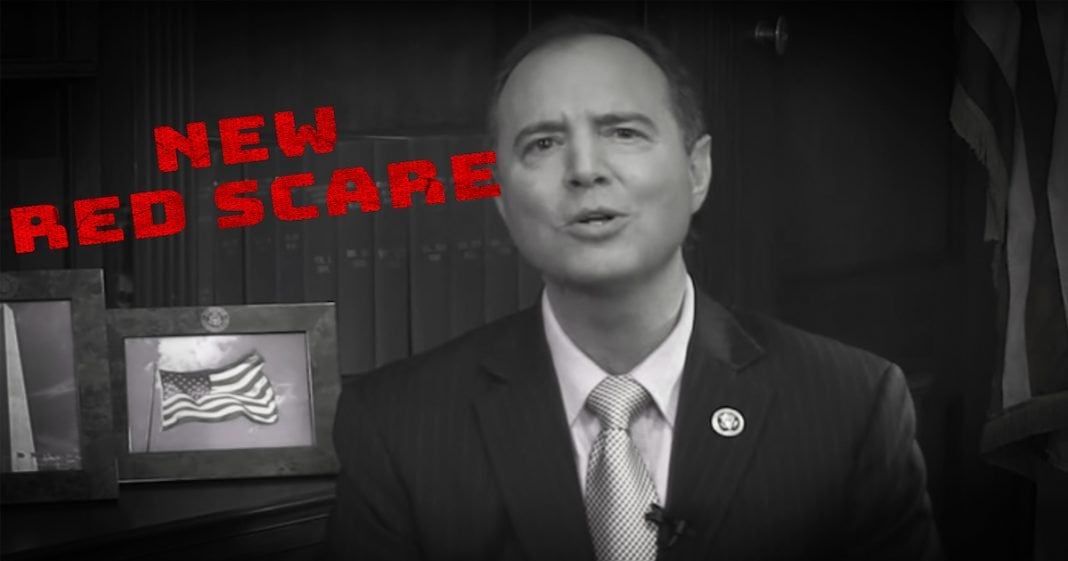 Republican Senator Joseph McCarthy has been dead for 60 years but it looks like Rep Adam Schiff is desperately trying to resurrect his spirit for the Democratic Party’s RussiaGate efforts. Ring of Fire’s Josh Gay calls him out.

Transcript of above video:

Republican Senator Joseph McCarthy has been dead for 60 years but it looks like Rep Adam Schiff is desperately trying to resurrect his spirit for the Democratic Party’s Russiagate efforts.

The story is familiar – The Red enemy was everywhere. Our military, our intelligence community, our cabinet, and even the White House was filled with spies from Russia. One outspoken Congressman continued to deliver convincing tales of Russian infiltration into our government. Sometimes there was a little evidence, other times it was speculation sold as evidence, with the news media breathlessly playing along.

Eventually, Joe McCarthy turned his Soviet suspicions into a dangerous inquisition, chilling the first amendment and blasting everything from women’s rights movements to child labor laws as a communist plot.

However, the current similarities to 1950 are stunning. The President demanding that employees demonstrate “loyalty” – a press that sees any slight connection to Russia as evidence that someone participated in subversive acts – and at the center of it all, a Congressman – connecting all of the dots for the public, even when the dots aren’t really there.

While Adam Schiff has not yet sunk to Joe McCarthy-like levels, the comparison is apt. If you listen to Rep Schiff’s opening statement on the Russian investigation in March, you had to wonder why an investigation was even taking place. Schiff laid out a story that removed most doubt from the story of Donald Trump working directly with the Russians to defeat Hillary Clinton in 2016.

Following that speech, McCarthy was known to assault anyone that did not fit his political mold with accusations of Soviet collusion and the press followed along gleefully.

Just like now, Red-hysteria moved the media meters. Back during McCarthy’s heyday, exaggerated headlines won the day – “Reds in High Places Face Senate Quiz.” Now – Rachel Maddow and CNN have cashed in on the current Russia story in a big way – even when they produce patently false news items.  There was always just enough evidence to fuel the hysteria.

Look, Schiff is far from the alcohol-fueled hatred of Joseph McCarthy but there are lessons to be learned. Sure, Russia is a threat. So are dozens of other countries. Indeed, most of us grew up with movies like Red Dawn and Rocky IV – so when we hear that someone had “ties to Putin” – we might as well make them a Russian spy. Six degrees of Vlad Putin has become the media’s new favorite game. And Adam Schiff is overjoyed to perpetuate it.

I’m with you – Trump sucks. I don’t want him in office any more than you do.  And yes… Russia did work to interfere in our democratic process – and indeed Trump’s campaign is full of some damn shady people. Trump Jr, Michael Flynn, Paul Manafort – these people likely had unethical business dealings.

However, unlike Rep. Schiff contends not everything can be blamed on the Russians. Healthcare, immigration, tax reform, Big Pharma buying congress – none of that is Russia’s doing. We are a long way from a new round of McCarthyism, but if the Russia-hawks have their way, we could be quickly approaching it.