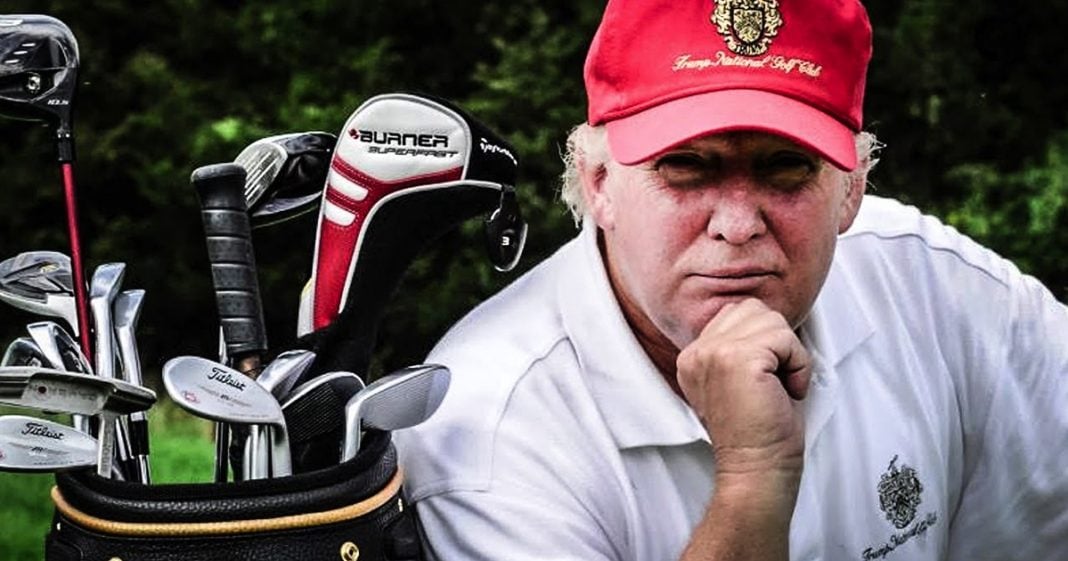 A new analysis shows that Donald Trump has spent slightly more than 22% of his days as President of the United States playing golf. Keep in mind, this is the same man who relentlessly attacked President Obama on Twitter for going golfing every now and then. On top of that, Trump plays at his own courses so he gets to pocket the money that the administration spends at these resorts. Ring of Fire’s Farron Cousins discusses this.

According to a new analysis by ABC News, Donald Trump has spent slightly more than 22% of his time in office at a golf course. Now I know a lot of Republicans like to dismiss these stories and say, who cares? Obama golfed. Yeah Obama golfed, but Obama didn’t spend nearly 25% of his entire presidency golfing. Obama didn’t spend 37 out of 170 of his first days in office on a golf course. Donald Trump has.

Furthermore Donald Trump and other Republicans including those at Fox News love to make a big deal about the fact that President Obama went golfing. Didn’t matter what was going on in the world. If Obama went golfing at some point, even after working for a month, they treated it as if he suddenly somehow committed treason against the United States. Donald Trump on the other hand just goes golfing whenever the hell he feels like it, as if he has nothing better to do in the world. That’s why these stories actually do matter, folks. 22% of his presidency has spent on a golf course. Do you think he’s out there talking policy? Do you think he’s out there making executive decisions about the future of this country? Do you think he’s out there making trade deals, meeting with foreign diplomats and digitationes? Working on the United States reputation abroad? You think he’s strategizing against ISIS out there on the golf course? No.

Donald Trump himself during the campaign admitted that if he ever won the presidency he would probably never see his golf courses again because he would be busy “in the White House working my ass off”. That is what the President said before he became the President. Just another promise that Donald Trump refused to keep. Now he could’ve kept it, he could’ve stayed away, he could’ve not been a lazy piece of crap but he decided he wanted to play.

Well let me explain something to you Mr. Trump, if you don’t want to be President you can stop. Okay? It’s not like you’re a struggling father trying to feed your children and you’re like, well I hate my job but I have to have it because I have to provide for them. No no no no. You chose this job. You chose to run for it and dedicate a couple of years of your life towards running for it and now you don’t want it. You don’t want to do any of the work that comes along with it. Well on behalf of all of the American public or at least the majority of the American public, you can step down and we will not be mad at you. Listen, here’s the deal, I’ll make you this deal right now, you step down from the presidency because you don’t want to do the work and I will never talk about you again. How about that? I think we could get a lot of folk in progressive media to go ahead and make that agreement. If you’re just willing to step down, because obviously you don’t want to do it, we’ll stop talking about you. We’ll move on.

You can go live your life, run your businesses, do whatever the hell you want, just stop ruining this country. Because that’s what’s at stake here folks. Leaders around the world look at the United States and what do they see? Do they see a president who’s a stand up guy? Who’s tough but fair? Somebody who is concerned about the well being of the United States citizens? No. They see a guy who has a job that he doesn’t want to do because he just wants to go out and have fun and play golf all the time. Furthermore, he’s playing golf at his own golf courses so every time he goes in, which I’m pretty sure he probably gets admitted in for free, but not everybody does. They still have to rent those golf carts, they still have to buy food and drinks and all that.

Donald Trump gets that money. Not only is he not doing work, he’s using our tax dollars because that’s what pays for everything the president does. He’s getting that money back in return because he owns those golf courses. There is nothing about this story that should make you happy, even if you’re a hard core Donald Trump supporter. You’re the ones getting screwed the hardest on this because his budget cuts, the Republican budget cuts are going to hurt your states the worst. Meanwhile the tax dollars you are paying are going to allow the president to play more golf. How do you feel about that? You still support him? Is that making America great again? Because last time I checked if you really wanted to make America great again maybe you’d spend a few hours a day doing your actual job.