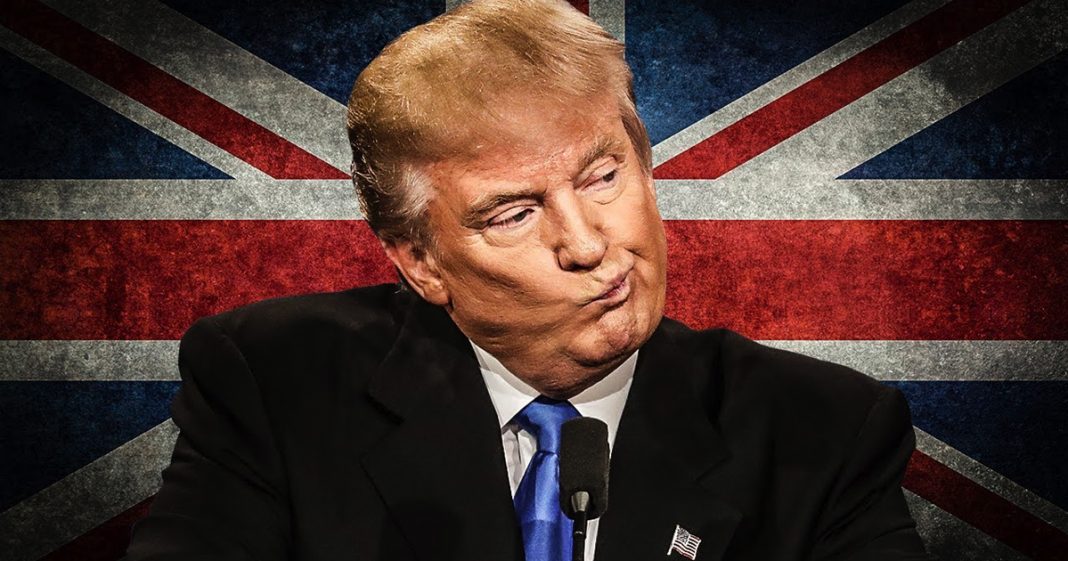 Donald Trump’s trip to the United Kingdom has officially been postponed until next year because the President wants to avoid running into too many protestors during his visit. The chances that he won’t be met with protestors next year are remarkably slim, and his fear will only make more people want to protest his visit. Ring of Fire’s Farron Cousins discusses this.

Well, it’s official. The British Government and the US Government have announced that Donald Trump will be postponing his visit to the UK until 2018. Now, the reason for this is because, and this has been confirmed by British media and a phone call between Teresa May and Donald Trump last month, is that Donald Trump doesn’t want to go visit London. He doesn’t want to go over to Britain because he’s afraid he’ll be met with protesters. Now he’s not afraid somebody’s going to hurt him or harm him or threaten him. He just doesn’t want to go over there and cause a big scene and be immediately met with opposition because people over there are opposed, according to them, to his divisive politics.

So Donald Trump has decided, even though it is customary, and this would be a diplomatic visit, after all, he does have business to discuss, with the leaders of the British Government, as they’re trying to work out a trade deal between the United States and the UK. And he’s going to postpone it because he is afraid of protesters. Because he doesn’t want those mean old people in the streets with their signs telling him that they don’t like him. That is how weak our President of the United States currently is. This man is so thin-skinned that he is unwilling to go work on a trade deal with another country, something he promised he would do during his campaign, because he doesn’t want people saying they don’t like him.

Now of course, according to Trump himself, he’s saying he’s doing this because he doesn’t want to disrupt anything over there. It isn’t one of these protesters interrupting the daily lives of people. He’s doing it for you. He doesn’t want to screw up your life because these people have nothing better to do. When in reality he’s hoping that maybe by 2018 the anti-Trump fervor over in the UK will have died down a bit, and he can sneak on over there and make his appearance and everything will be fine. But the groups organizing protesters against Donald Trump have made it clear that they are going to be ready at a moment’s notice to appear wherever, whenever Donald Trump shows up in the United Kingdom, including his Scotland golf course of Turnberry, which it has been hinted at that Donald Trump will go visit sometime within the next few days as he heads over to France for Bastille Day.

Now, Trump obviously has many, many problems. But this particular issue, that he won’t travel to Britain, to work on a trade deal for a diplomatic visit because he’s afraid of protesters, what does that say to the rest of the world about the United States? How are our enemies going to look at this? And say, “Oh, that’s a man we should be afraid of. Maybe we need to stop being so horrible.” No. They know they can get under Trump’s skin and undermine his administration without dropping a single bomb or committing an attack. All they have to do is organize a few protesters to say, “We don’t like your policies.” That’s how you defeat Donald Trump, and he just gave that blueprint out to everybody on this planet.