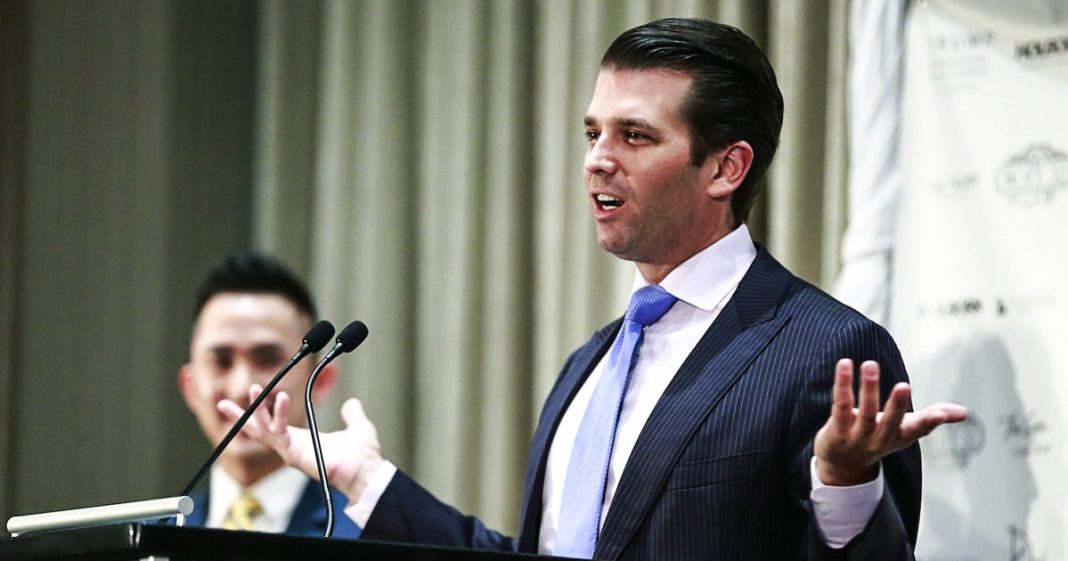 (NOTE – This video was recorded BEFORE Trump, Jr. decided to Tweet out incriminating evidence that corroborated the lawyer’s story.)

The Russian lawyer who met with Donald Trump, Jr. last summer is finally speaking out, and according to her account of the meeting, Trump’s son was absolutely desperate to get his hands on damning information about Hillary Clinton and the DNC. She claims that she never had this information, but her revelations are bad news for the Trump administration. Ring of Fire’s Farron Cousins discusses this.

Now according to the lawyer, she actually did not have any of this information. She had nothing to give Donald Trump Junior, but he basically begged her for it. He was desperate for it. In her own words, “He wanted it so badly.” And when we talk about the issue of collusion it doesn’t have to mean that he carried it out, that he followed through with it. It was that he attempted to.

Think of it almost as an undercover sting, right? You know, you don’t always have to commit the crime in order to get busted by the Feds. Sometimes all you have to do is go along with it, be strung along long enough, admit that you want to do it and that’s all it takes for a conviction. And if this lawyer is telling the truth, and she did not have information for Donald Trump Junior, then that might be what we’re looking at at this point.

However, what seems more likely is that she may not have had the information, but perhaps, again pure speculation, perhaps she directed him in the direction to get that particular information that he wanted.

But the bottom line is this: A day, a day after this story broke about Donald Trump Junior’s meeting with this lawyer, he hired his own set of lawyers. That’s how bad he understands this story will be for him. He doesn’t call it fake news, he’s not out there necessarily trying to say it didn’t happen. In fact he’s on Twitter saying, ‘Yeah, it happened, but it’s not la la la.’ He doesn’t understand what he’s trying to say and that’s why he immediately, the next morning after the story broke, had to go out and hire lawyers.

Things are getting bad for the Trump Administration. Really bad. The evidence of collusion or at least attempted collusion attempted treason is becoming overwhelming at this point. Now we still have the private investigator, Bob Mueller out there doing his thing. Late last week he hired even more lawyers to start working on this case. So something big is happening there as well. Unfortunately we won’t know that until they release their final report which hopefully will include some criminal charges against people in the Trump Administration.

But until then, until we get firm acknowledgement from those involved, everything is speculation and that is the part we have to keep in perspective here. We know Donald Trump met with the lawyer. She claims he wanted that Clinton information. He hasn’t said whether or not that’s why he met with her, so again, until a trial or until firm evidence emerges, that part is actually just speculation.

We can hope. We can hope that that is what he did and that is what we will find out from the investigation. But we have to be cautious going forward. We can’t necessarily say that it did happen until we have all of the evidence and can say that without any shadow of a doubt.