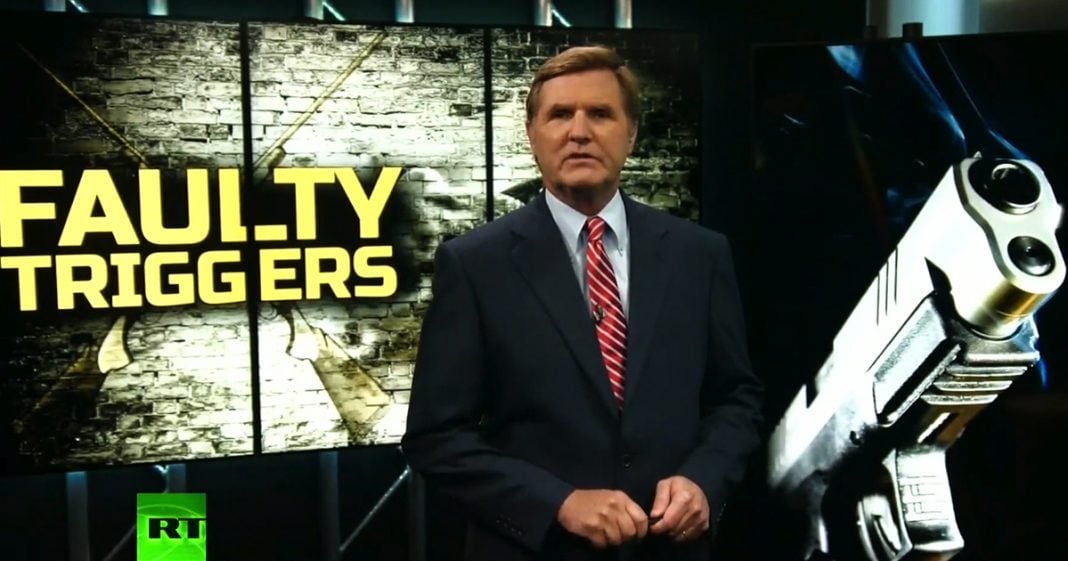 Via America’s Lawyer: Mike Papantonio discusses a dangerous defect in the Remington 700 rifle and speaks with Arthur Bryant, Chairman of Public Justice about the details of the case.

Papantonio: In the United States, an average of three people die every hour from gun-related injuries, including homicides, suicides, and accidental shootings. And it’s that last category – accidental shootings – that hasn’t gotten as much attention as the other categories. According to the Centers for Disease Control, between 2005 and 2015, more than 6,500 people in the U.S. died from unintentional shootings. Most of these victims were under the age of 25, but some of them were as young as one year old. The majority of these deaths were children in elementary and junior high schools.

While most of those accidental shooting deaths were due to negligence on the part of the gun owner, there were some that could have only been prevented by the manufacturer of those firearms. And that’s the story of Remington, one of the largest rifle manufacturers in the United States.

The Remington Model 700 is the most popular bolt-action rifle in the United States, and it was also designed with a very serious flaw that the company has known about for almost 70 years. This flaw, according to the company’s own documents is that the gun can occasionally go off without anyone ever having to pull the trigger. This happens because of a faulty trigger design the company came up with in the 1940s. The company wanted to design a system where the trigger could be pulled with as little pressure as possible to make the gun fire. There are two pieces involved in this mechanism, and a connector between the trigger and the connector does not always reconnect properly, allowing pieces to fall in between the two, causing the trigger to become unstable. This mechanism is a disaster.

But again, Remington’s own documents show that as early as 1943, company executives understood that their design couldn’t work because the pieces inside of the trigger could disconnect from one another, which would then lead to the rifle firing by itself. Remington received numerous field complaints during its initial testing of this new trigger mechanism and engineers at the company recommended that the company go with a different trigger design. But in 1948, the company said that they made the decision to stick with their original design, in spite of the deadly flaws that they were well aware of.

So let’s fast-forward 70 years to today. These documents showing the company’s knowledge of their defects and decision to ignore them were only made public after the tremendous efforts of the legal advocacy group Public Justice. Public Justice obtained these documents, made them public, and helped to expose a 70-year cover up by Remington. Today there are about 7.5 million Remington rifles with this defective trigger design in the hands of American citizens. These rifles are ticking time bombs – waiting to discharge their payload without any warning.

Arthur: Well the basic defect Mike, is that the gun will fire without anybody pulling the trigger. It is a danger to every gun owner who has it, to their loved ones, to innocent third parties. That’s the basic defect. It actually stems from a fundamental design defect. This is the only rifle design in the world that has two pieces to it. It has both a trigger connector and a trigger body. Now they did this because they thought that would make the pull easier and make it shoot more with less pull on it, which I guess is true. The problem is, the trigger connector itself doesn’t reset like it should always and because there’s two pieces, anything that falls between the two pieces, like metal scrapings or dirt even, can get in there and leave them unstable so if anybody bumps the rifle, if you put the safety on on the rifle, if you take the safety off on the rifle and a number of other ways, the gun fires on its own.

Papantonio: Yeah, there’s actually lead residue is enough to actually bring this about. Of course that happens every time you fire a gun. I think the troublesome thing about this is that people listening to this might say, ‘Well, gee, this is something the company just learned.’ How long did the company know about this defect? Clear defect, and why didn’t executives choose to do something about it to save lives?

Arthur: To be clear, the company has known about this since the 1940s within a year of when the design was first developed by a master marksman, Mike Walker. It’s called the Walker Fire Control. Their own documents show they ran tests and Walker himself said, ‘We have a problem here. Here is how we fix it.’ The company looked at fixing it and decided it was going to cost them too much money. They should leave it there. The documents we posted on the web at www.remingtondocuments.com show that they repeatedly considered over the years doing a full recall and retrofit with a safe trigger, which they’ve now agreed to do, but for decades they didn’t do this because it was going to cost them too much money. Even while they knew people were dying. Even while people were being maimed and even now, they still insist there’s nothing wrong with this trigger, when they know it’s actually defective and killing people.

Papantonio: Arthur, your organization, Public Justice, was successful in obtaining these Remington documents after the company had hidden them. Intentionally hidden them from the public for decades. They knew they were hiding them. They were back in the file cabinets, they wouldn’t give them to anybody. You know what’s so interesting about this is, most people don’t know that the gun industry has an immunity of being sued even for something as outrageous as this. Talk about that a little bit. This crazy immunity that we’ve given them.

Arthur: The gun industry does have immunity from all sorts of lawsuits, but thankfully, in this case, one they don’t have immunity for is for defectively designing a rifle or a gun, or defectively manufacturing it. In fact there were lawsuit after lawsuit after lawsuit, literally dozens, over 150 lawsuits against Remington from people being shot or killed or maimed by these triggers. The problem is they use secrecy orders, they use sealing orders, they settle these cases but only with the agreement that all the information would be kept secret, so this has gone on, for like you said, close to 70 years when they knew there is a defect, when people were getting killed. When there were lawsuits, they just managed to keep it all hidden.

Arthur: Well thank you first for having me on the show. I really appreciate it. I’m thrilled by the work you do and I’m thrilled that we got these unsealed. Actually it started with a man named Richard Barber in Montana. He’s a NRA member. He’s a gun rights advocate. He believes strongly in the Second Amendment. He and his wife and his two kids would go off shooting on weekends, over the weekend, they would come back home. They’d have a great weekend. One weekend they came back, and his wife is emptying their rifles, his Remington 700, to empty the rifle you have to take off the safety. She takes off the safety, her finger is nowhere near the trigger, the gun fires on its own. Shoots and kills their nine year old son, Gus Barber. They were devastated, as you can imagine.

Arthur: Yes, horrifically typical. What was atypical here was that Richard Barber was an extraordinary person and was dedicated to making sure this doesn’t continue. He came to us and asked us, after he brought his own lawsuit and it settled quickly, and he got Remington to agree to fix the design, which it has now done. He asked us to unseal court records for him. Public Justice has a special project to unseal court records. What we unsealed, like I said, is up at www.remingtondocuments.com. What they showed was, that this company had known for decades that people were being hurt. People were being killed. That the gun was defective and doing nothing about it.

How we got them ultimately unsealed, we first unsealed one court file by just moving to intervene, but that was one court file. Then a proposed class-action settlement was reached with Remington, Public Justice is not involved in it, where Remington has agreed to give a free trigger retrofit, with a now safe trigger, a new safe trigger, to anyone who has one of these guns who makes a claim. Everyone who has one of these guns should stop using it.

Arthur: There are 7-1/2 million of these rifles still out there. Every single one of them is a danger. Everyone who has one of these needs to file a claim in this lawsuit called Pollard versus Remington to protect themselves, to protect their family members, to protect their loved ones. The fact that you’ve had it for 20 years, and it hasn’t fired without a trigger pull, doesn’t mean it won’t happen the next time you pick up the gun. You need to get this fixed. We ultimately got these documents unsealed by threatening to sue if they didn’t unseal them. Since Remington had agreed in this proposed settlement that it would give a free trigger retrofit to anybody who made a claim, it knew if we came in and said, ‘How are people supposed to decide whether to make a claim if it can’t see the truth?’, it knew that if we got into court, we would win, and so it agreed to give us all the documents. It didn’t put them on the web, so we had to put them on the web.

Anybody who wants to know the truth, know how to make a claim, know how to protect themselves, needs to go to www.remingtondocuments.com or to go to Public Justice, www.publicjustice.net to get more information and make the claim.

Papantonio: All right. Arthur, what’s so important about this, this is so … this can happen so easily. This can simply be a build up of lead residue in that trigger mechanism. If you know somebody with this rifle, get in touch with Public Justice. They can at least work your way through this and keep your family safe.