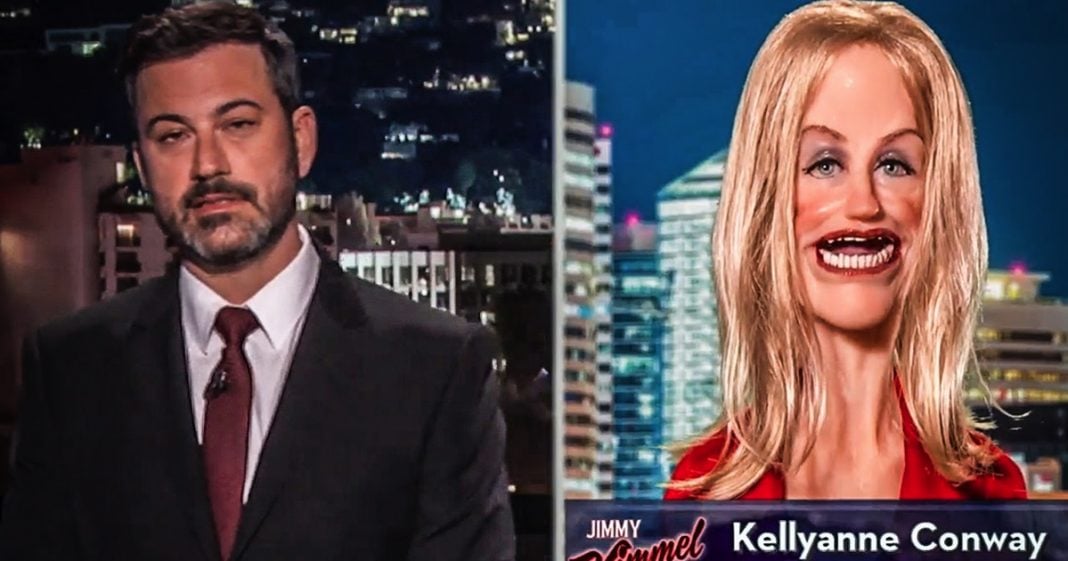 Jimmy Kimmel took White House counselor Kellyanne Conway to task on his Monday night show for her constant refusal to actually address the questions that the media asks her. His attack on her appearance aside, it turned out to be a rather accurate portrayal of how she acts with the media. Ring of Fire’s Farron Cousins discusses this.

It’s no secret that Jimmy Kimmel hasn’t been a fan of the current administration or the current Republican leadership in Washington, DC. Last night, he decided to speak with White House counselor Kellyanne Conway to get some answers about the ongoing Donald Trump Jr. Russia collusion saga. Take a look.

Jimmy Kimmel: Tonight, we are very fortunate to have Kellyanne Conway live via satellite, hopefully to clear this all up. Hello, Kelly.

Kellyanne C.: Hello, Jimmy. Thanks for having me.

Jimmy Kimmel: Well, thank you for joining us. Let’s cut right to it. Why did Donald Trump Jr. and the highest level campaign staff have a meeting with a Russian in the first
place?

Kellyanne C.: Okay. First of all, define meeting. When you say meeting, what are you talking about?

Jimmy Kimmel: Meeting, when people meet, they get together and they have a meeting.

Jimmy Kimmel: A meeting is when people gather and talk. I don’t know. It’s a meeting. It’s just a meeting.

Kellyanne C.: Is that a meeting?

Jimmy Kimmel: All right. The lawyer admits she told them that she …

Kellyanne C.: Listen, we should be focusing on Hillary Clinton and the shemails that she’s been hiding.

Jimmy Kimmel: You know what, thank you very much, Kellyanne. I appreciate your time.

Now first and foremost, I have to point out going after Kellyanne Conway for her appearance is juvenile, it’s cheap, and we need to be above that. There’s plenty of things to go after Kellyanne Conway about without even touching her appearance. That was a cheap shot and I feel like Jimmy Kimmel and his producers should’ve known better than to do that. Now having said that, their portrayal of her, her personality and her talking points, was about as spot on as you can get without actually having Kellyanne Conway sitting in that seat. They portrayed her the way she is, which is someone who likes to question what the questions mean. Someone who likes to deflect attention away from the actual question and say well, why aren’t we talking bout this instead?

What’s interesting about that is that when you get booked to go on a television show, they tell you what they want to talk to you about. Many times, in case you’re dealing with people, higher up people, they will often ask the producers of the television show to send over the questions that they will be asking. That’s something a lot of media outlets do. Now, Kellyanne Conway knowing full well why she goes on these shows when she goes on Fox and Friends or CNN and then deflects the questions that she’s being asked knows why she’s there and yet still somehow always manages to act surprised that they bother to ask her about the collusion or about the corruption or about anything stupid Donald Trump has said that day.

That’s why this portrayal by Jimmy Kimmel and his team was so accurate. Kellyanne Conway is the administration’s distraction. She is the one they send out to try to get the media talking about other things. That’s why she plays so well on Fox News. She knows that she can mislead that audience. She knows that she can redirect the hosts, if they even bother to ask her any tough questions, which they usually do not. When she goes on CNN or when she goes on ABC, she cannot control the conversation. Those people tend to hold her accountable and that’s what Kimmel was trying to portray. Again, aside from the attacks on her appearance, I think they did a damn good job of showing us what Kellyanne Conway really is like and what her role is within the Trump Administration.