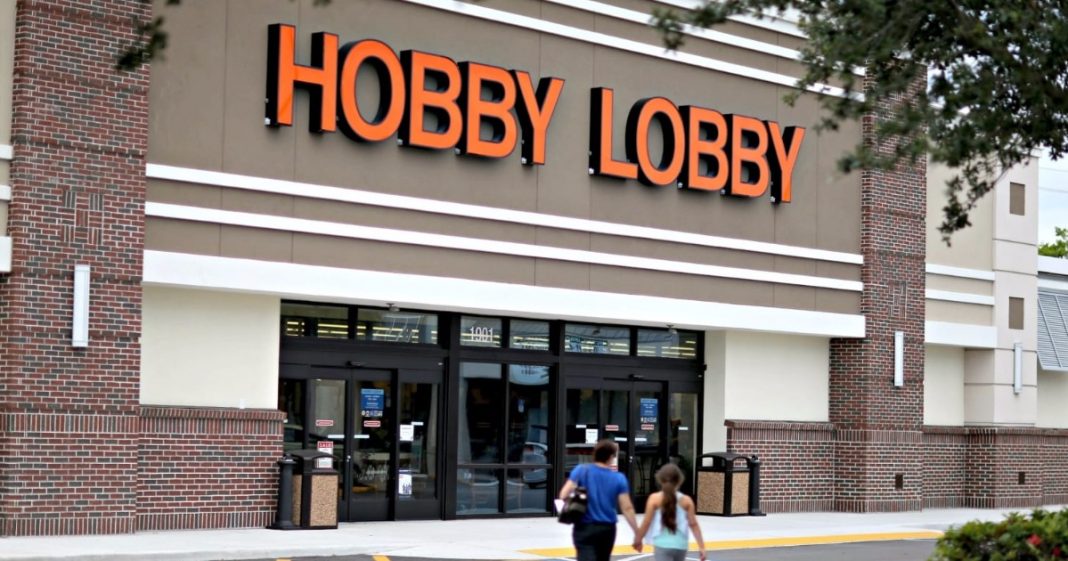 Last week, Hobby Lobby got caught with its pants down when Department of Justice found them guilty of the illegal purchase and smuggling of archaeological artifacts looted from historic sites in Iraq.

Many of you probably remember the Supreme Court “Hobby Lobby” decision in 2014, in which the corporatist justices ruled that the company’s “good Christian” owners had the right to shove their beliefs down women employees’ throats by denying contraceptive coverage. Well, the billionaire Green family, driving force behind the “Museum of the Bible” scheduled to open in Washington D.C. this fall, may be obsessed with controlling people’s private sexual behavior in the name of “righteousness” – but they have no problem with theft and deception.

According to a statement from the U.S. Attorney’s Office, thousands of ancient cuneiform tablets dating back as far as 5000 years were purchased from black market sources in the United Arab Emirates. Those artifacts originated in the Mesopotamian region of Iraq, once the heart of the Babylonian Empire – which figures prominently in the Old Testament of the Bible.

They were falsely labeled as “product samples” and shipped to Hobby Lobby stores as well as two of the company’s corporate affiliates. Specifically, the packages containing the artifacts identified the contents as “ceramic tiles” so as not to attract unwanted attention from U.S. Customs inspectors and contained labels claiming the objects came from Israel, rather than Iraq

These illegal artifacts not only represent theft of antiquities rightfully belonging to the people of Iraq, but is also a blatant display of the Green family’s hypocrisy. While (like many right-wing evangelical Christians) the Greens are gung-ho about enforcing their narrow view of “sexual morality,” they have little problem engaging in illicit transactions that have not only violated Iraqis’ rights to their own history and heritage, but have in all likelihood helped finance the terrorist activities of organizations such as ISIS.

The entire affair dates back to 2009, when Hobby Lobby began collecting historical books and artifacts “consistent with the Company’s mission and passion for the Bible.” At that time, the company’s president, Steven Green, traveled to the U.A.E. in the company of an antiquities consultant in order to examine cuneiform tablets and other artifacts from the time of the Akkadians, a Semitic-speaking people living in Mesopotamia from around 3000 B.C.E.

An archaeologist working for Hobby Lobby had warned the company’s attorney about the possibility that the artifacts had been looted, strongly recommending that all customs forms clearly and accurately state the country of origin.

Apparently, that advice fell on deaf ears. Approximately 5,500 priceless antiquities were shipped without the necessary documentation, and were labeled as “ceramic tiles” and “samples” from Israel and Turkey. Furthermore, Hobby Lobby never paid the dealer who sold the artifacts. Instead, $1.6 million was wired into accounts belonging to seven different individuals.

Of course, Green claims ignorance. In a statement issued last Friday, he said, “We should have exercised more oversight and carefully questioned how the acquisitions were handled.” A company representative also claimed that “mistakes were made” in dealing with sellers and shippers who “did not understand the proper way to document and ship [the artifacts].”

Nonetheless, ignorance of the law is no excuse. As part of its settlement with the D.O.J., Hobby Lobby will have to forfeit its ill-gotten gains and pay a $3 million fine.

In 1664, the French playwright Molière penned the satirical comedy Tartuffe.  It is about an impostor who worms his way into the household of a wealthy family, masquerading as a “pious” man, presuming to lead them to the “ways of righteousness.” His real agenda is to steal the family’s property (as well as to seduce the married lady of the house).

Today, Hobby Lobby is playing the role of the hypocrite Tartuffe, stealing property from its rightful owners while attempting to seduce people into its fanatical religion with its show of “piety” and “righteousness.” And that’s just what it is – a show.