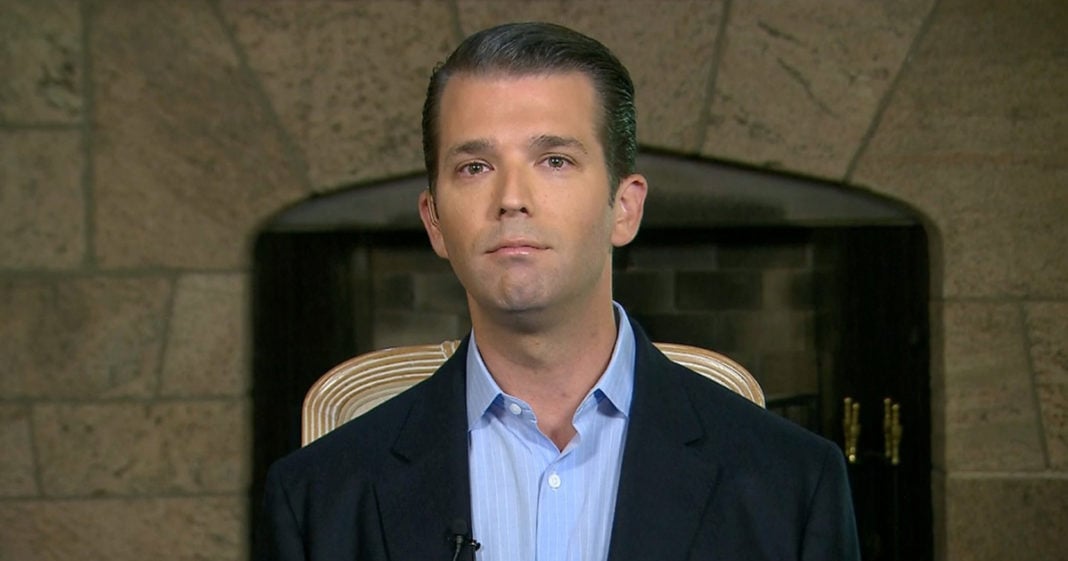 When it comes to Russia and the Trumps, corruption is a family thing.

Over the weekend, the New York Times reported that Donald Trump Jr., President Trump’s eldest son, had met with a lawyer connected to the Kremlin. According to the report, the meeting was attended by Jr., Paul Manafort, and Trump’s son-in-law Jared Kushner.

A later report confirmed the reason for the meeting: Don Jr., had been promised damaging intel that might help his father defeat Hillary Clinton. Considering the suspected government connection of the informant, what Trump Jr. engaged in seems highly illegal.

What’s more, reports say that Donald Trump Jr. knew that he was being given negative information about Clinton as part of a Kremlin effort to steer the election in his father’s favor – collusion, plain and simple.

In an ironic twist, the public learned of this bit of information from an email correspondence between Don Jr. and the lawyer who was expected to give him the information.

To make matters worse for the Trump family mafia, Trump Jr. took a page from his father’s book by tweeting repeatedly in response to the allegations, confirming portions of the New York Times report in two written statements.

No inconsistency in statements, meeting ended up being primarily about adoptions. In response to further Q’s I simply provided more details. https://t.co/FdT1D4hfhz

Donald Jr. also tweeted that he would cooperate with any investigations, a statement which attorneys say was ill-advised.

Happy to work with the committee to pass on what I know. https://t.co/tL47NOoteM

In his statement, Trump admitted that he had met with the woman, and that he was expecting to receive damaging intel about Hillary Clinton during the meeting. Trump says that the promised intel was not delivered during the meeting, and instead, they spent the bulk of the time discussing adoptions between Russia and the U.S.

Don Jr.  claimed that he did what anyone interested in their father winning his election would do, saying there is nothing wrong in listening to damaging oppo.

Obviously I’m the first person on a campaign to ever take a meeting to hear info about an opponent… went nowhere but had to listen. https://t.co/ccUjL1KDEa

But in fact, while this may have technically been true had the informant been a private citizen, the fact that the attorney is tied to the Kremlin means that Trump Jr. did something very, very wrong.

After all, receiving damaging information about ones opponent from a foreign agent would most certainly ensure that you, an elected official, would be indebted to a foreign nation. And when that foreign nation is Russia, amid ongoing and seemingly endless scandal, the report would seem to be the smoking gun.

According to a Daily Beast report, the eldest Trump child appears to be acting without legal counsel altogether, a dangerous action for the son of the president. Like father, like son.