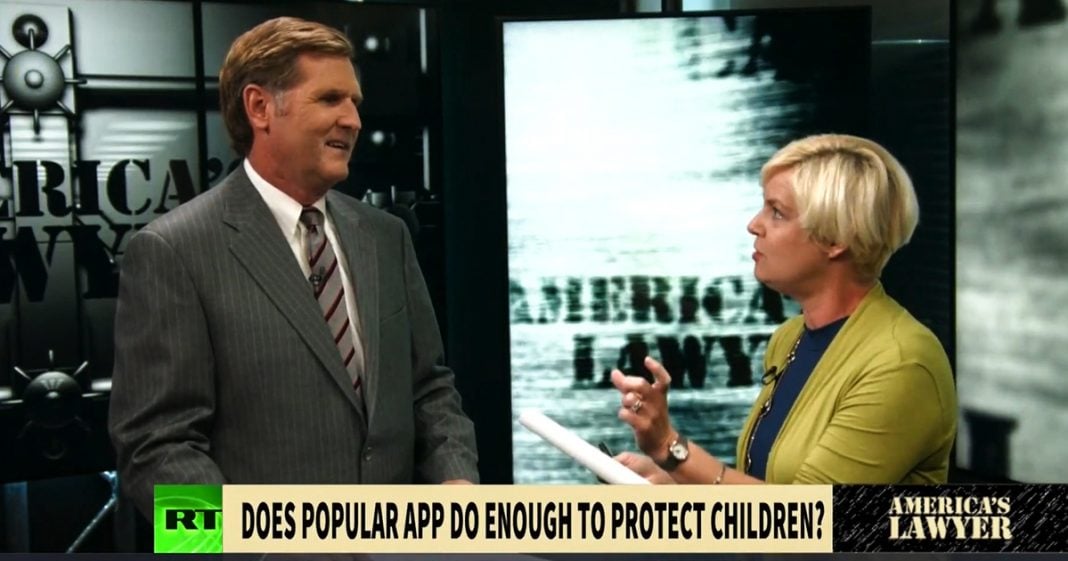 Via America’s Lawyer: Mike Papantonio is joined by Mollye Barrows, Legal Journalist for The Trial Lawyer Magazine, to talk about a popular app called Musical.ly that may be putting children at risk.

Papantonio: A popular phone app is facing questions about whether it does enough to protect children from predators. The app’s called musical.ly. It allows users to create short video clips of themselves dancing and lip-syncing to songs, and it’s used by many young children, but some parents have warned that this app, it can put children in danger by allowing anyone to follow and message them. Last year, a father in the United Kingdom detailed in a series of Facebook posts that a stranger had been sending sexually explicit messages to his eight-year-old daughter. Other parents have reported similar stories. Here to talk about that and the company’s responsibility, their legal responsibility to protect its younger users, is Mollye Barrows, a legal journalist with The Trial Lawyer Magazine. Mollye, what is this app? You’re seeing bits and pieces in the media finally.

Mollye: Yes, it’s interesting. There are a lot of apps like it. You’ve got musical.ly, which is essentially, it started out as an education app, but when it wasn’t a financial success as an online education tool, the organizers, creators of this app turned it into basically an online entertainment tool where they partner with various music companies to get their music out, so kids can choose from a list of songs and create 15-second short little music videos. Well, some of these songs are pretty risqué, so these kids are in essence making adult content. They’re dancing provocatively. They’re singing along to lots of lyrics that have foul language, and maybe support a gangster lifestyle, if you will.

A lot of parents don’t like it for that reason, because it’s easy for kids to access and behave poorly. The way it’s set up with these likes, it almost becomes addictive for these kids to interact and like each other’s videos, so that ups the ante. They perform more and more outrageous things to get the attention, and then it’s easy to go down the rabbit hole. There’s also some extremely adult-made and adult-created content that includes pornography and other acts of violence that these kids don’t have a hard time finding, even when they’re on there. Now, the company says kids under 13 aren’t allowed to use the app-

Papantonio: But what does that mean? I mean, you see that all the time.

Papantonio: I mean, the company understands.

Papantonio: There’s no question, this company clearly understands that this note about well gee, if you’re under 13 you can’t use it. Company’s part of this anyway. What are major concerns about how children are using this app? What are the big concerns?

Mollye: So many concerns. Again, who’s monitoring them? These companies want to put it back in the parents’ laps, but going back to musical.ly, when they say no kids under 13, they don’t even require you to put your age in there, so how are they really going to know? Then you have other apps like Kik, K-I-K, which don’t even require you to put a number in there, so you can register as an anonymous user. 40% of the kids who use that app are teenagers, so a lot of these entertainment apps are geared towards kids.

The concerns are that they’re going to be exposed to predators, that they’re going to embarrass themselves at the least when they get old enough. Maybe they’re making some content that shows up when a future employer is trying to research them and see what comes up when they Google their name, so when you’re 13 and you made this inappropriate little video, that could come back to haunt you. Then on the other worse end of the scale, you’re opening them up to being targeted by predators. These companies are essentially, there’s not a lot of regulation. The strongest rule that we’ve got right now in the United States is something called the Children’s Online Privacy Protection Act-

Papantonio: Which means nothing.

Mollye: Well, because again, it’s saying if you’re deliberately marketing to kids under the age of 13 then you need to abide by these rules. Well, all it does is encourage these companies to avoid creating apps that actually create good content. Kids that are required to go and put their age in are going to lie. Some of them have to get parental consent, and these companies, and you talk to them, even the president of musical.ly, he did an interview with another media source about a year ago and he said, ‘Hey, we’re trying to work with parents. We get feedback from parents all the time. We want to make this safe,’ but the bottom line is money.

Papantonio: Yeah. Got about 30 seconds. What are the legal challenges against … that should be put forward on this, or what have we seen so far?

Mollye: Not a lot, because it’s where do you find the hook to file the lawsuit? Where do you prove the damage? These companies, again, are trying to put it back in the laps of parents. Oh well, you know we’ve made it so that they have to get parental permission, and even this rule says we’re trying to give parents the control that they need to monitor their kids, and they all put it back into well, parents should be paying attention, but the bottom line is it’s almost like the old thing when Camel was marketing cigarettes to kids with cartoons. You know kids are going to use it. What steps are you taking to help even when parents aren’t watching?