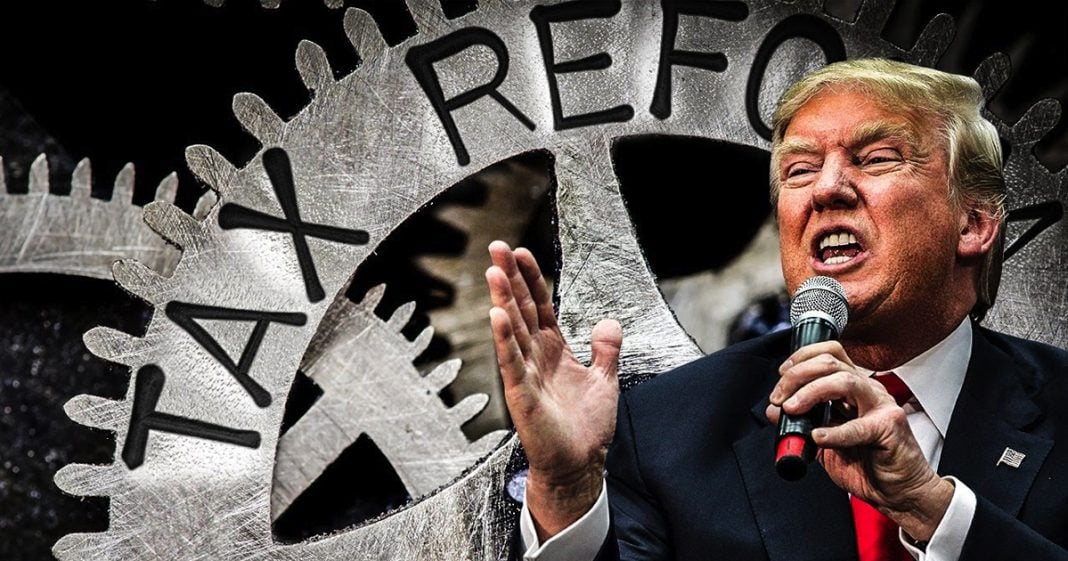 At this point, Republicans are either completely ignorant about economics, or they are choosing to put the interests of their wealthy donors over the laws of economics. Either way, a new analysis shows that their tax plan – which is a giveaway to the wealthy – would add trillions to the national debt and would shrink our economic activity, worker productivity, and economic output. By all measures, this plan is an absolute disaster. Ring of Fire’s Farron Cousins discusses this.

Republicans in Washington D.C. are working around the clock to come up with a tax plan that’s going to give your tax dollars to their wealthy donors. The Paul Ryan Tax Plan, this is the plan that he is out there promoting every single day through his Twitter account, is nothing more than what we’ve seen from Republicans in the past, which is a massive giveaway to wealthy Republican donors, to the top 1%. It will do nothing to, as Paul Ryan says, simplify the tax code, because that’s what he’s doing this under the guise of. He’s saying the tax code is too complicated, “We have to simplify it.” In Paul Ryan’s mind, simplifying means, “Screw it. Just give all the money to the wealthy people.” It does nothing for the middle class. It does nothing for the under class. All it does it take our tax dollars away from vital things like infrastructure and schools and teachers and everything like that and gives it back to wealthy Republican donors.

According to new reports, reported in Forbes mind you, which is certainly not a liberal rag, says that, Paul Ryan and the Republican’s tax plan is not only going to actually shrink the economy, it is going to, over the course of the next 10 years, add trillions of dollars to the federal deficit.

Now, remember, Republicans are the ones who, when Democrats are in office only, say that deficits are the worst thing in the world. If we think back to the Bush years when they developed this exact same tax plan, because it is exactly the same, Dick Cheney went on national television and said, “Deficits don’t matter.” That was after eight years of Republicans telling us during the Clinton years that deficits are the most important thing in the world. Then, they also started telling us that during the eight years of President Obama. ‘He’s ballooning the deficit. This country’s going to go bankrupt. We’re going to turn into the island of Greece because of the amount of debt that Obama has wracked up.’ Now, once again, even though expert say that their tax plan is going add trillions to the debt, Republicans are still out there pushing it.

Let’s forget the deficit talk for a minute, okay? Republicans say the deficit doesn’t matter, depending on who’s in office of course, and to an extent though they’re actually right. Deficits in the short-term really don’t do that much damage to this country. Even in the long-term they don’t do a whole hell of a lot of damage. To an extent, deficits really don’t matter, so let’s move beyond that argument.

Let’s get into the other nuts and bolts of the report that show that the Republican tax plan is an absolute economic disaster. First of all slowing growth. Republicans have built their tax plan on the Keynesian theory that demand is what grows the economy. People out here, consumers, average everyday Americans, want more stuff. Because they want more stuff, the economy grows. However, Republicans have misinterpreted this. They think that giving money to the top 1%, the people who do not spend most of their earnings … It goes into savings, it goes into stocks, it goes overseas to off-shore tax havens. It doesn’t go back to the US economy. The people whose demand drives economic growth are the 99%. The people who spend 100% of their paychecks because they have to. Those are the people who grow the economy.

Republicans have ignored that, and they’ve taken these Keynesian measures to say that if we give more money to the top 1%, their increased demand is going to help all the workers in this country, because, of course, trickle down economics. Which we all know, every time it’s been put into practice, it has crashed our economy.

Furthermore, worker productivity, according to these studies, is going to decrease by 0.5% of the next nine years. The reason for that, again, is because if workers do not get more money, and workers in America are already starved for cash, demand is going to drop. When demand drops, people get laid off. When demand drops, people have to make fewer things. That is why worker productivity, as a result, will fall because of this.

Let’s not forget the overall economic crash that these studies say would absolutely happen if these tax cuts were put in effect, because, just like the decrease in productivity, decrease in demand, as workers in America afford fewer things, they buy fewer things. They buy fewer things, businesses start making fewer things. They lay off workers. More people unemployed. Demand gets lowered even further. It is a pendulum that swings back and forth of economic policy. Workers want less. Businesses make less and fire people. Fewer people have money. Demand decreases. More firings. More layoffs. That’s what happens folks.

Republicans for some reason are either choosing to not believe that this happens because they want those tax cuts for the rich so bad, or they are painfully ignorant about basic principles of capitalistic economics. I don’t know, which it is at this point. I know they desperately want to give Republicans a tax break, but with how adamantly they insist it’s going to help the economy, part of me does believe that these people are actually dumb enough to think that their economic policies will work.

Going back to the 1980’s, we have seen in every single instance Republic economic policies don’t work. They don’t. You cannot find an example from modern American history where a Republican instituted an economic policy that was successful. The only times we have seen true economic prosperity in the last 30, 40 years is when Democrats came into office and raised taxes on the top 1%. The facts back that up, but there are no facts, no case studies, no examples that show us from the last 40 years that a Republican economic policy can ever be successful.