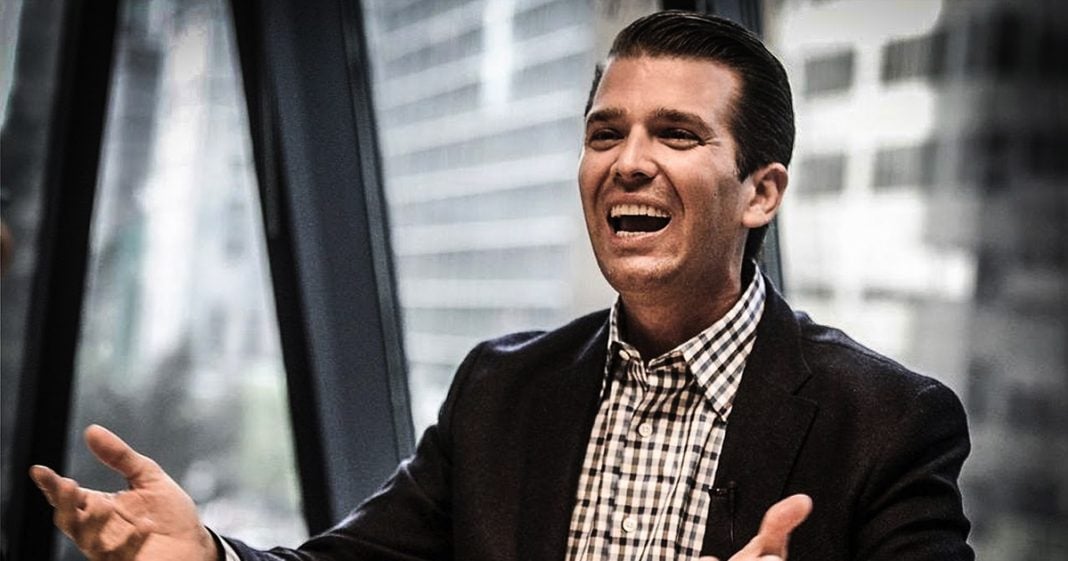 Donald Trump, Jr. has confirmed that he met with a Russian national during the 2016 presidential campaign, and officials say that the meeting took place because the Russian official promised to deliver damaging information on Hillary Clinton. If these allegations are true, this could be the final piece of the puzzle to incontrovertibly prove collusion between the Trump campaign and Russian officials. Ring of Fire’s Farron Cousins discusses this.

Things for the Trump administration took an unexpected turn this past weekend, when it was revealed that Donald Trump Junior, on June 6th 2016, met with a Russian lawyer, who promised him some damning information on his dad’s then opponent Hillary Clinton.

Donald Trump Junior has admitted that this meeting took place. Manafort and Kushner I believe were also at this meeting. And it proves, one, that Donald Trump Junior had previously lied about not meeting with any Russian officials, or Russian nationals, which this woman he met with was. So, if it turns out to be true, that he was promised damning information about Hillary Clinton, then folks, that is basically case closed on collusion between the Trump campaign and Russian officials.

If that little nugget of information, which insiders are saying is what happened, if it is true, then yes, the Trump campaign absolutely is guilty of collusion. If Donald Trump Junior went to that meeting all amped up about the fact that he was about to get some good intel on Hillary Clinton, that’s collusion.

If what reporters and officials are telling us happened happened, then yeah, there’s no more denying it at this point. I mean, even some of the hard core people have to be looking at this and saying, ‘You know what? I’m starting to think there’s something there.’

Now, don’t get me wrong. I do not want to start a new cold war. I sure as hell don’t want to start another actual war, certainly not with Russia. But at this point, the evidence has become overwhelming. And every week, we’re getting some new damning report, showing some kind of collusion, but this is the first time folks, when we’ve actually linked a blood member of the Trump family, who had previously lied about this meeting, to a Russian official.

Now, the Trump White House obviously is in full damage control mode right now, and in fact Kellyanne Conway had to go on TV Monday morning to try to backtrack her previous statements, saying that there was no meetings between these people, and instead what she said was, ‘Well, disclosure forms have now had to be amended.’ So, even though these people lied on their disclosure forms, which is illegal, they now, ‘Well, we just go back and we just change it. We just write it down, we erase it,’ I guess, what they had said. ‘We’ve got barrels full of white-out if we need it, to fix what these idiots lied to us about.’

There are very few questions left at this point. If Trump Junior met with a Russian official under the assumption they were going to give him damning information on Hillary Clinton, then this will be the end of the Trump administration, and that’s the bottom line.