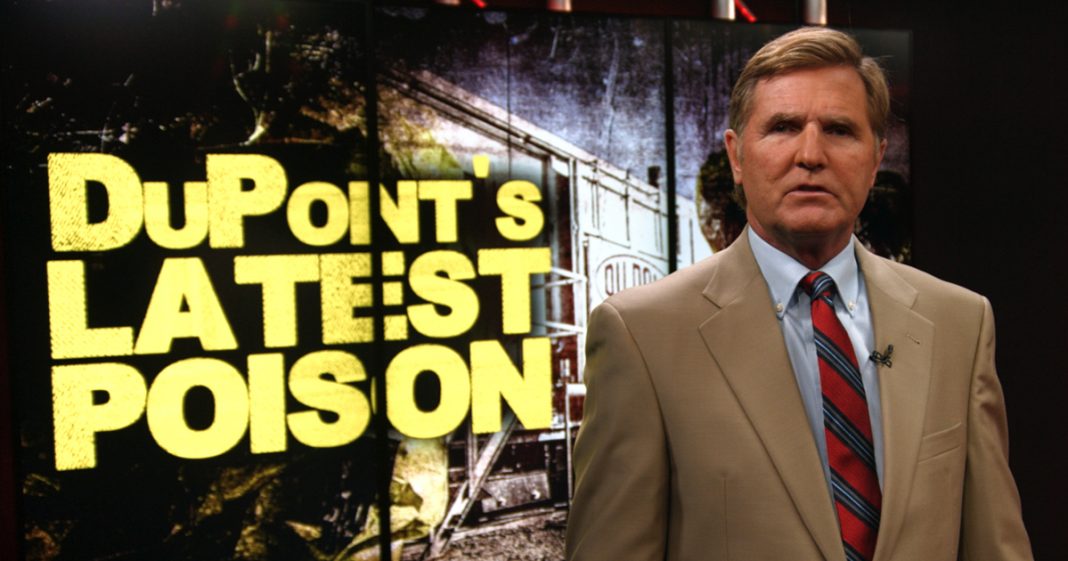 For decades, DuPont was using a chemical called C8 to produce their blockbuster product Teflon. DuPont was well aware of the toxicity of C8, according to their own internal documents, but it wasn’t until the company was facing thousands of lawsuits that they finally stopped dumping this toxic chemical into the Ohio River where it poisoned thousands of people.

But the chemical that replaced C8 – a chemical known as Gen X – is beginning to cause similar health problems to C8, and close to 300 thousand people along the Cape Fear River may have been exposed to DuPont’s newest toxin. Mike Papantonio discusses this.

In 2009, DuPont officially stopped using a chemical known as C8 in the production of Teflon, mostly in response to the massive lawsuits that the company was facing. The company’s internal documents show that as early as 1988, they’ve been aware of the dangers of C8, yet they hid these dangers from the public until the recent lawsuits exposed their cover up for the entire world to see. Even before they stopped using C8, the company had been working with a new chemical that they said would replace their toxin. In 2006, they started using a new chemical called GenX, which DuPont told both regulators and the public was far safer than C8.

The news surrounding DuPont’s GenX chemical is unfolding the exact same way that their C8 cancer story unfolded. Not only are we learning that this new GenX chemical is causing cancer and reproductive problems in animal studies, but the company was fully aware of these dangers for years. DuPont has filed 16 reports of what’s called the substantial risk of injury to health over this chemical, GenX. These reports were filed with the EPA between 2006 and 2013, under Section 8(e) of the Toxic Substances Control Act. That specific section of the law says that if a company’s involved in the manufacture of a chemical and they have information that reasonably supports the conclusion, that the substance presents a substantial risk to injury to health, then they have to inform the EPA.

In just seven years, the company had to file 16 of those reports on the toxicity of the chemical that they told both regulators and the public was a whole lot safer and less toxic than C8 when they started using it. GenX has been associated with dangerous health effects in test rats, including cancer, changes to the immune system, and problems related to reproduction.

In January 2013, DuPont said in a report that rats exposed to varying amounts of GenX over a two period, formed cancerous tumors in the liver, the pancreas, and the testicles. Rats also developed benign tumors, kidney disease, and even liver failure. Even worse is that DuPont scientists who signed off on these reports said that they probably weren’t relevant to human assessments, which the company always says. They always say that all these animals dying is not relevant to humans. They say that so they can continue to get the green light to dump these chemicals into places like Cape Fear River in North Carolina. Again, just like C8 being dumped into the Ohio River Valley, we’re beginning to see the same story with GenX chemical popping up in the blood of people living along the Cape Fear River and as many as 300,000 people could have been exposed to dangerous levels of this chemical. It’s a tragic story that, once again, shows how criminal corporations will never change the action until their executives serve time behind bars.