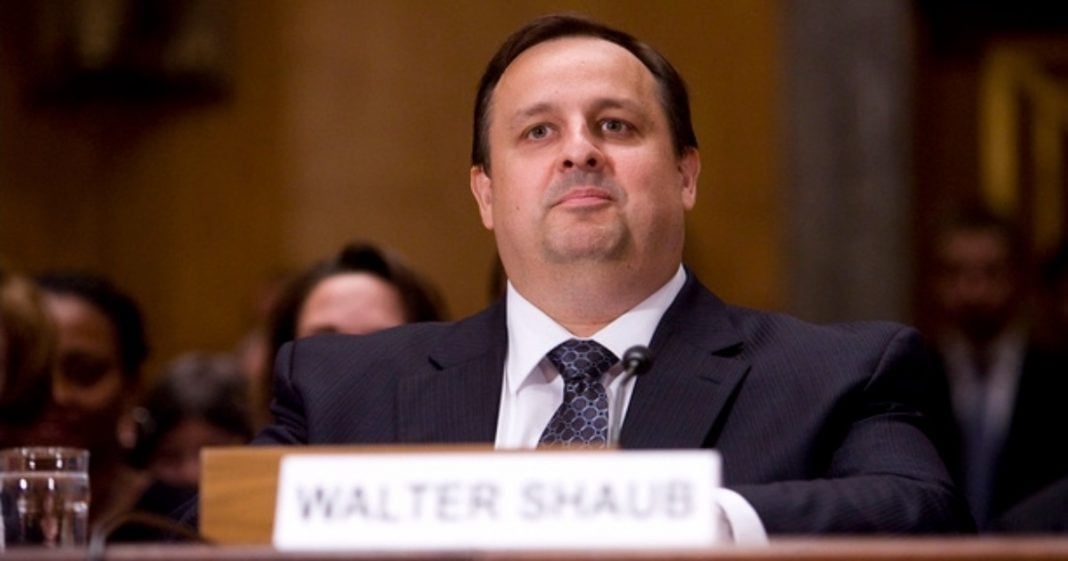 For the second time in recent weeks, another high-level government ethics official has resigned, citing frustration over the open corruption that has become the hallmark of the Trump Administration.

This past week, Walter M. Schaub, director of the Office of Government Ethics, announced that he was stepping down six months early. Like former Compliance Counsel for the U.S. Department of Justice Hui Chen, Schaub has been an outspoken critic of the Trump Administration and its ongoing questionable behavior.

In his resignation letter, Schaub extolled the efforts of his colleagues, pointedly praising them for their commitment to “protecting the principle that public service is a public trust, requiring employees to place loyalty to the Constitution, the laws and ethical principles above private gain.”

Although Schaub refrained from mentioning Trump’s blatant corruption, it is obvious that his views on the subject have not changed. Like Ms. Chen, who said that the Administration’s behavior was making it impossible for her to hold corporations to ethical standards, Schaub has stated that he could go no further in his current position given the current state of corruption in the White House. He pointed out that “in working with the current administration, it has become clear that we need to strengthen the ethics program.”

Like Hui Chen, who says she will continue her efforts to hold corporations accountable working in the private sector, Mr. Schaub plans to keep fighting for ethics in government as the new senior director for the Campaign Legal Center.

Nonetheless, his resignation, coming so soon after that of Chen, is disturbing. Is this going to be a continuing pattern? Has the Trump Administration become so putrid and rotten that those in government who are supposed to hold them accountable are going to throw their hands up in frustration and walk away? If those charged with “guarding the guards” decide to leave their jobs, what does this portend for the country?

On one hand, the prospects look grim. If men and women committed to honesty and integrity in government continue to abandon the sinking ship of state, it will give the Trump “Machine” full rein to run roughshod over our democracy, turning it into the fascist oligarchy that the GOP has been eagerly anticipating for decades. In fact, it may be inevitable.

Trump has made it his holy mission to put the foxes in charge of the hen house: EPA head Scott Pruitt has been busy purging real scientists from the agency, Secretary of Education Betsy DeVos has been working overtime to gut public education in favor of advancing her own theocratic agenda, vote-rigging has been institutionalized in favor of the GOP and now, the so-called “Election Integrity Commission” is preparing to make certain that voters most likely to vote Democratic – namely, minorities and college students – are being purged from the rolls.

On the other hand, there has been – and will continue to be – widespread resistance to the Trump agenda at the state and local level. For example, twenty-six states have refused Kobach’s request for sensitive voter information altogether. Nineteen more states have agreed to supply only information that is already public record and available to anyone.

While Trump, at the behest of his friends in the petroleum industry, has pulled the U.S. out of the Paris Climate Agreement, city mayors across the country have declared their continuing support. Municipal governments are also defying Trump’s “Sanctuary City” Order with the help of skilled lawyers and the courts.

To date, 18 states have brought lawsuits against Betsy DeVos’ Department of Education over its attempts to privatize public schools and universities.

In fact, anger over Trump tyranny and GOP corruption has spread into traditional Republican strongholds, even if protests are falling on deaf ears of cowardly and craven members of Congress.

Fixing government in Washington D.C. is becoming a lost cause, as indicated by the recent resignations of Chen and Schaub. However, governments at the state and local level as well as legal organizations outside the Beltway are still strong. If “Tammany Trump” has no use for those who are honest, forthright and dedicated to truth, justice and a functional government that works for everyone, the rest of us are grateful to have them on our side.

“All politics is local” – as is resistance. Therein lies our best hope.