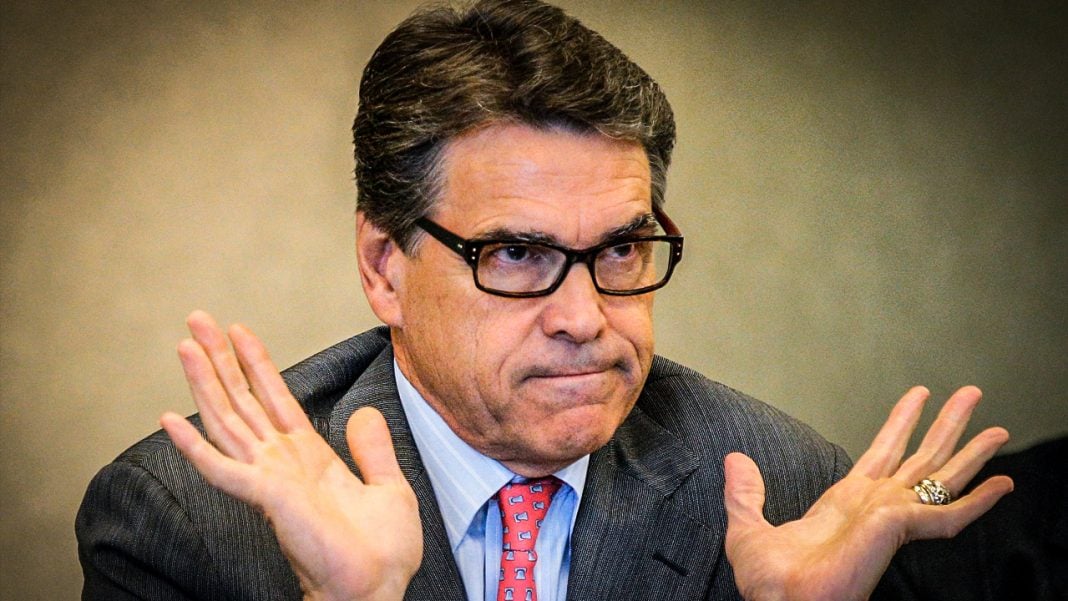 During a speech Thursday to coal workers in West Virginia, Secretary of Energy Rick Perry attempted to explain away the decline in coal sales across the globe.  According to Perry, the problem isn’t that people don’t want coal, it’s that coal workers aren’t giving them enough coal.  Perry told the crowd that demand follows supply, which proves that he has no idea how economics works. Ring of Fire’s Farron Cousins discusses this.

Rick Perry, the current Secretary of Energy and the former Governor of Texas and former twice failed Republican party presidential candidate, he gave a speech earlier this week to a bunch of coal miners at a coal plant in West Virginia where he gave them a bit of an economics lesson. In fact, Perry himself called it an, “Economics lesson.” Perry said, “Supply and demand, you create the supply and then the demand will follow.” Now, I don’t know how many people watching this are economics experts, economics professors, or just people who understand what economics is, but for anybody who understands even the slightest little bit of economics you know damn well that it doesn’t go supply first then demand. It’s demand and supply. Rick Perry thinks, again, Secretary of Energy for the United States, thinks that if coal companies, coal workers, coal miners, coal plants, if you just produce even more coal people are going to want it.

In reality, and I don’t think Rick Perry understands this because he’s never been known as a beacon of intellectualism, coal demand across the planet is dropping. That’s why coal companies for the last few years have been filing bankruptcy left and right. Nobody wants their product anymore. People are moving on to cheaper forms of energy, cleaner forms of energy. Basically, any other kind of energy that’s not coal. Supply was never the problem. Demand was, Rick. You have to understand that. You can’t go tell a bunch of coal workers who are already afraid of losing their job in a dying industry that if you just work a little harder your industry’s going to be just fine. You’re lying to them and you’re selling them bogus economic points that are not true.

What you should’ve said was, “That as Secretary of Energy here’s what I’m going to do. I’m going to come up with a plan that’s going to save your job. Not your job in the coal company, but the fact that you have a job. We’re going to reinvest in renewable energy infrastructure and I’m going to get each and every one of you trained to go work in that new industry. You’re still going to have a job, you’re just going to be doing something different and we’re going to make sure we get you the training you need to do this new job, get America on a different form of energy, everybody wins.” Except the coal company CEOs and that’s the only people that Rick Perry cares about. To kind of go a little further on his little supply first then try to find the demand later, I don’t know if Rick Perry’s heard of things like new Coke, Pepsi AM. Do you have to have the demand before you make the supply, Rick. That really is day one economic stuff there.

You have to understand that. You can’t go out and tell people you’re going to give them an economics lesson, which is literally what you said, and then make it up as you go along. If you’re not in a position where you understand the issue, do not try to teach it to other people. In fact, don’t make promises in general that your administration can’t keep. The coal industry itself has admitted nothing can be done to bring those coal jobs back. They understand that their industry is dying. They understand that global demand is dropping and there’s nothing they can do to change it. It’s just a matter of time before they all close. The only thing we can do to soften the blow for these workers is to get them into jobs training programs that the government needs to fund to create renewable energy. The US could be a world leader on that issue if only we had an administration that understood basic economics.