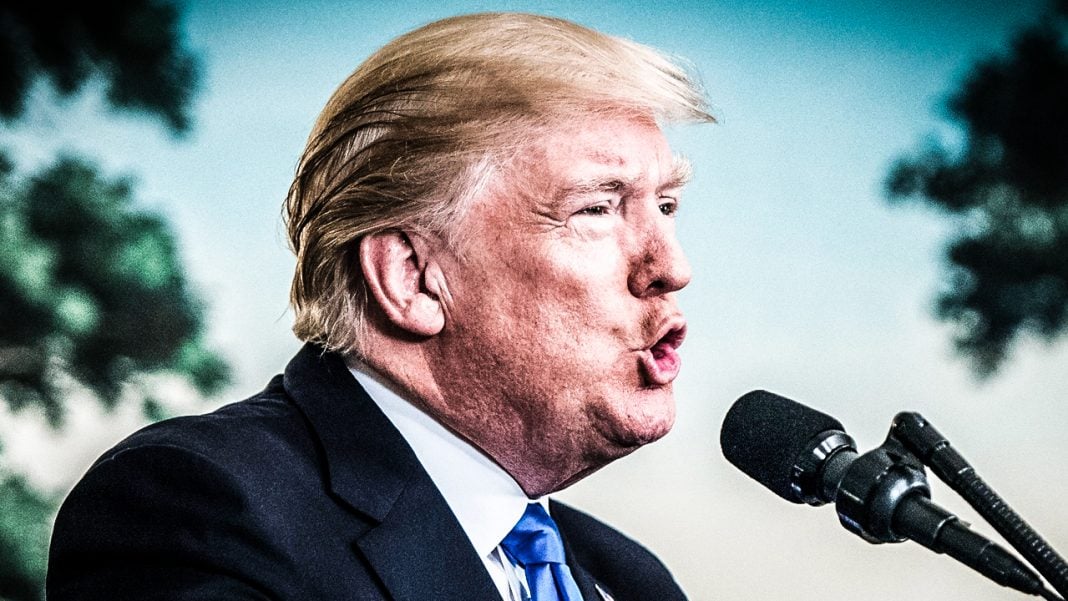 According to a new Politico poll, a majority of voters believe that Donald Trump is reckless, sexist, and thin-skinned.  His recent Twitter tirades against media outlets and personalities have helped to tank his reputation and expose him as a weak bully who delights in making fun of others, and that’s not the image that most people want the President of the United States to project. Ring of Fire’s Farron Cousins discusses this.

According to a new Morning Consult/POLITICO poll, 59% of American voters view President Donald Trump as reckless. 55% view him as sexist, and 53% view him as thin-skinned. Those are all majorities, in case you’re following along at home. The majority of people in this country, according to the latest roundup polling, view Trump as thin-skinned, sexist, and reckless, three qualities you typically don’t want to see in a sitting president, three qualities you really don’t want to see in any human being anywhere ever, let alone the president. But that is how he is viewed by most of the American public, and to be honest, according to international polls, those views are shared with most of the rest of the world as well. Only 35% of those polled viewed him as honest and steady, just 35%.

Now, other polls have come out this week following his little Twitter feud with Mika Brzezinski, where he called her dumb as a rock, and talked about her facelift and bleeding from the face. His disapproval rating has jumped back up to 60%. Donald Trump is losing every fight that he is trying to have right now, and it’s because he is thin-skinned. Now, I know people don’t like us to talk about his Twitter feed, or at least not spend too much time on it, but that is his preferred means of communication, and it’s the way in which he sinks his own presidency. If he would back off the Twitter, he might actually accomplish something. Maybe, I know there’s a pretty much 0% chance of this happening, but maybe it would be good. Maybe it would be to the benefit of the American public.

At one point, he mentioned he wanted to lower prescription drug prices, so why don’t you put the Twitter down and go work with pharmaceutical companies to bring those prices down for us, buddy? But you can’t, because you’re too thin-skinned. That’s what the public sees. They understand that any time somebody says something negative about you, even though it’s the truth, you’re going to do everything in your power, you’re going to stop what you’re doing, and you’re going to relentlessly attack that person or that outlet, call them fake news, say that they’re failing, say that they’re bleeding from the face, or dumb as a rock. But that doesn’t change the fact of what that person says. Not only does the public hate you at this point, but your attacks on the Morning Joe show on MSNBC, their ratings are literally higher now than ever, highest ratings in the history of the program, after your little feud with them where you thought you got the best of them. You lost, and you lost big time. That show’s more popular than ever.

So please, Mr. Trump, for your own reputation, learn how to let things go. That’s your problem. You don’t know how to let things go. You’re the president of the United States. You’re going to get more criticism than anyone else in this country. That’s what comes along with the job. That’s what happened to Clinton. It happened to Bush. It happened to Obama. It’s going to happen to you, but none of those men, and none of the men before them, Republican or Democrat, with the exception of Nixon, decided to lash out at people so badly. They might say things behind closed doors. They might make a couple jokes at the correspondents’ dinner, which you canceled, but they didn’t waste their entire lives worrying about all this.

I mean, think about George W. Bush, who was relentlessly attacked by the media, appropriately I might add, for being dumb as a rock, as you called Mika Brzezinski. He didn’t know what he was doing. He got us into a war based on lies, but he didn’t let the negative criticism bother him. Hell, he had hundreds of people camped out outside his Texas ranch, and he still went about his day. He was like, “To hell with them. I’m doing what I want to do.” Now, he should’ve listened to them, absolutely. He should’ve ended the war. He should’ve never started the war, but he wasn’t as thin-skinned as you to just sit there and piss and moan about the fact that people are being mean to him even though they’re being honest. Get over it, buddy. If you can’t handle the pressure and the criticism that come along with this job, then I don’t think you’re going to be disappointing too many people in this country if you decide that you want to step down so people just stop being so damn mean to you. I for one would absolutely support that decision.