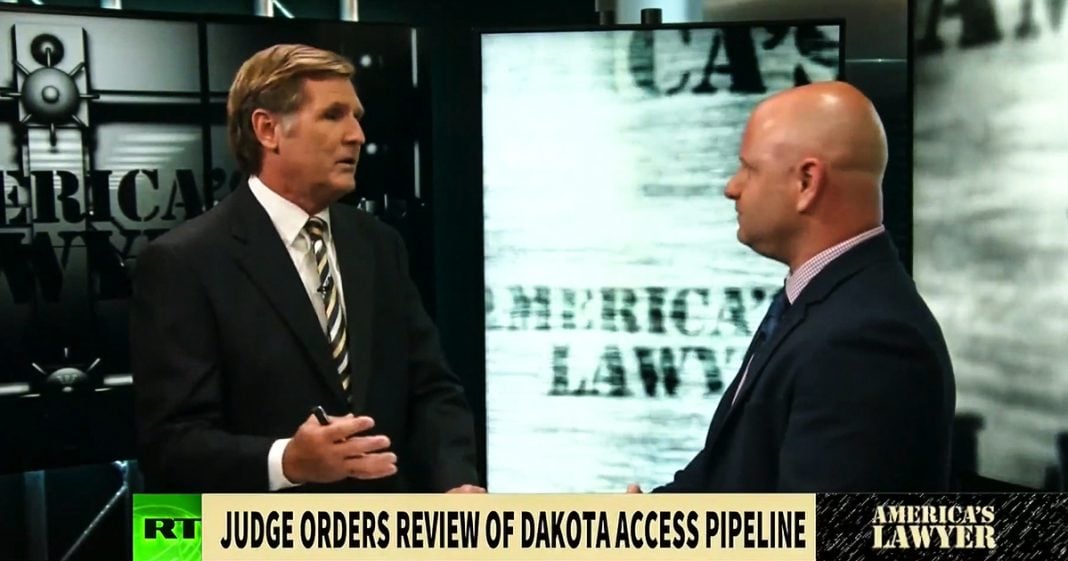 Via America’s Lawyer: Mike Papantonio is joined by Farron Cousins, Executive Editor of The Trial Lawyer Magazine, to talk about the impact of a judge’s recent ruling on the Dakota Access Pipeline.

Papantonio: The Dakota Access Pipeline is back in the spotlight after a federal judge ordered the Army Corps of Engineers to reconsider its environmental review of the project. The judge’s decision was welcome by the Standing Rock Sioux Tribe chairman, who’s renewed his call to cease pipeline operation, but that’s easier said than done. While this decision opens up the possibility that the pipeline could be shut down, it’s not going to happen until a number of hearings take place over the next few months.

Joining me now to talk about this is Farron Cousins. He’s Executive Editor of the Trial Lawyer magazine. Farron, I want to know, what led to this federal judge’s decision? I mean, this is a big step. This is a big move for a federal judge. What led him there?

Farron: Basically, he understood what everybody else understood, and that was the environmental review process by the Army Corps of Engineers was completely inadequate. We knew that back in December, when Obama finally decided to step up and say, ‘Okay, we’re not going to go forward with this project.’ And then, I believe, three or four days into his administration, Trump comes in, reverses that order, and says, ‘Nope, push through. Go ahead and build it.’ The review had not even been completed at that point. The judge understood this, and he said, ‘Look. There is no way I can authorize this to go forward, when we haven’t even followed the rule of law at this point.’

Papantonio: I mean, due process is a constitutional right, whether it’s a civil, criminal, due process is part of how we operate as a society in America, and whoever was advising Trump didn’t tell him about, ‘Oh yeah, that little thing in the Constitution.’ Well, look. The Standing Rock Sioux chairman, he wants the pipeline shut down while the courts are considering, and that’s kind of logical, isn’t it? Because if you think about the damage that can be done here, this fellow’s saying, ‘Look, shut it down until we can find out what needs to be legally done.’

Farron: Well, see, that’s what’s remarkable about this decision. Usually, when you have any kind of environmental decision from the court system that says we have to continue a review, or go back and redo a review, the operation, whatever it is, is shut down at that point. However, this judge ruled that no, you can continue to let this oil flow, which it began flowing earlier this month, even though he’s admitted we don’t know enough about the environmental impacts of this. We know that it’s going to go over land that we have given to the Standing Rock Sioux, that’s part of the treaty we have with them, that they use for hunting and fishing, and we don’t know what kind of environmental impact it will have on that if there is a leak. And, as we’ve seen from every other oil pipeline, there’s going to be a leak at some point.

Papantonio: You have done several stories on this, both for the Trial Lawyer magazine and on television. As I listen to you, you talk about the obvious thing, and that is we have the biggest aquifer in the entire United States underneath this pipeline. As you look at this from a risk/benefit analysis, don’t you at least say the risks are huge, and there really is no harm in stopping this for a while until it works its way through the courts, and we find out, and somebody says, have these companies, and has the government, complied with due process? What’s your take?

Farron: I agree 100%. I mean, the only people that will suffer if this pipeline stops flowing for a few months are the corporate shareholders at Energy Transfer Partners, and the people that own stock in that. The American public, it is not going to affect them one way or another. It could have devastating impacts for the Standing Rock Sioux, and anyone else who pulls water or any kind of economic activity from this area, but we have to start putting the needs of everybody else over the needs of a few corporate shareholders, and that’s something that’s been missing, essentially in every environmental discussion that we have. It’s always shareholders over the people.

Papantonio: Certainly, in the last three decades, it’s always been an economic analysis versus quality of life versus human rights versus what is best for everybody, what’s best for the commons.

Papantonio: That analysis has disappeared in American jurisprudence. Look, a U.S. district court has set up a series of hearings this summer about all of this. What’s your take on what’s going to happen there?

Papantonio: Yeah, whether it’s shooting people with rubber bullets or macing them, whatever they want.

Farron: Right, and corporations typically, unfortunately, win in these situations.

Papantonio: The zinger on this story is corporate media dropped the ball on purpose. Corporate media did not do their job because their adver … This is a great example of what I talk about all the time. Advertisers would not let, MSNBC, NBC, CBS, would not let them tell the story. Matter of fact, social media drove this story about the horrendous conduct that we were seeing from these corporations. Thank you for joining me.