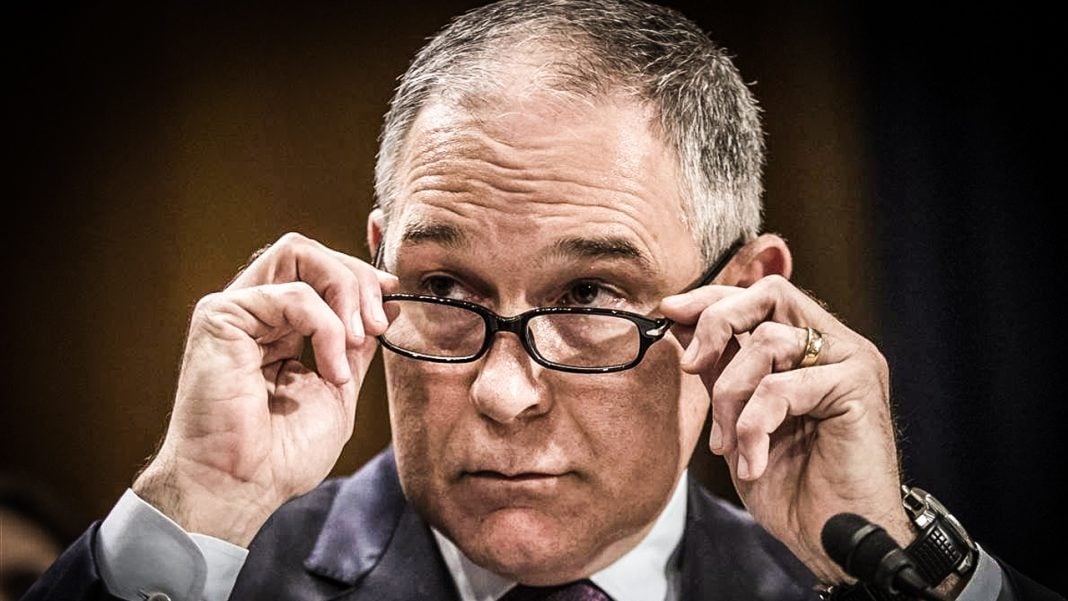 The EPA is attempting to formally hijack the peer-review process for all scientific studies pertaining to climate change, giving them the final authority on what can get published.  This is fascism.  Academics are under attack, and the EPA wants to make sure that their beliefs on climate change are the only ones that make it to the public. Ring of Fire’s Farron Cousins discusses this.

In one of the more disturbing news stories to emerge out of Washington, DC recently, it’s been reported that Scott Pruitt, the Head of the EPA is basically trying to do away with the Scientific Peer Review Process for any kind of scientific articles that come into his administration regarding climate change. What he wants to do instead is do away with the Peer Review process where scientists go back and forth about what is accurate and what is not and methods of study and things like that, and instead he wants his office to be directly involved with that process so they can take out anything in these reports or scientific studies that they don’t like.

Now, keep in mind he has already told us he wants to stack his EPA with industry insiders, people from the fossil fuel industry, people from the chemical industries. What Pruitt is saying is that he wants the oil industry, he wants chemical manufacturers to be the ones to go through the scientific literature and take out what they don’t like, and then post that edited report basically showing that climate change isn’t real, that environmental destruction is just fine for human health. That’s what’s happening at our EPA today.

You know, out of every division within the Trump Administration what is happening at the EPA has been largely ignored, essentially completely ignored by the corporate controlled media. Progressive media outlets are talking about it, but they’re not talking about it enough because this one particular agency is the one that has the most immediate, direct effect on the daily life and health of American citizens. That’s what people have to understand. If we have people from the fossil fuel industry or from the chemical companies, Dow, Monsanto, DuPont, if those people suddenly become in charge of our climate policy and our policies on pollution and what’s acceptable levels for human beings to be ingesting poisons, we’re all doomed, and I don’t mean to say that as some kind of hyperbolic warning. I’m warning you now that it will happen. This isn’t an overstatement.

Again, as somebody who has seen these corporate documents from DuPont and Monsanto and Dow, I know that that is how they operate. Any trial lawyer who has handled those cases against those companies knows that that is what they do. They lie about it. They cover it up and they hide it from the public. They tell us that everything is just fine, these toxins won’t give you cancer, even though they know the truth. Believe me when I tell you that that is what will happen if Pruitt goes through with his plan.