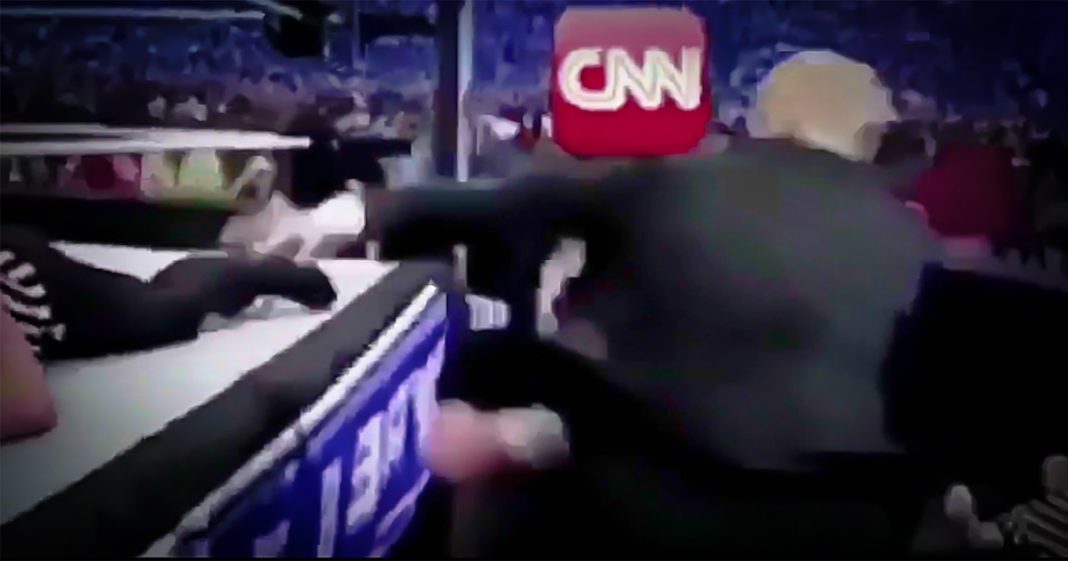 CNN and President Trump are engaged in media war over a stupid internet meme. Now, Jeff Zucker’s news network has resorted to blackmailing the internet user who originally created the now famous video. Ring of Fire’s Josh Gay says this is nothing new for Jeff Zucker.

(Transcript of above video:)

I’m not sure how many of you have had to break up an argument between two children – but if you have, you know that settling a debate like “who would win in a fight – Kylo Ren or Spiderman” or settling a heated discussion on who gets to eat the first popsicle out of the box is tough because of the sheer ridiculousness of it. Well, that’s what it has been like listening to Donald Trump and CNN this week. Two massive babies fighting over gifs and reddit – willing to throw EPIC tantrums over internet memes.

To catch you up – you may know that the President tweeted an edited clip from his Wrestlemania appearance in 2007. This version of the clip shows Trump body-slamming someone whose head has been replaced with the CNN logo. It was stupid, it was goofy, it was not very Presidential – but it should not have been looked at seriously.
However, immediately the debate flared – saying that the tweet could lead to violence against journalists. With what then-candidate Gianforte did to a reporter, there is a real issue – but looking at the stupid tweet from the President, it is hard to imagine that it was anything other than silliness.

But then something even more bizarre happened – CNN tracked down the Reddit user that made the clip – HanAssholeSolo – and CNN threatened to publish his identity – but did not because the person apologized, according to CNN reporter Andrew Kaczynski – the reporter went on to say that HanAssholeSolo won’t “repeat this ugly behavior on social media again.”

“CNN reserves the right to publish his identity should any of that change.”

That is blackmail. Pure and simple.

CNN of course maintains that they didn’t threaten or coerce the user.

But, this is all REALLY troubling and it points to CNN going down a dangerous path – all coming from desperation from the network – straight from the desk of Jeff Zucker. This sort of chest-thumping doesn’t get out – especially in the wake of the deleted Russia story – without Zucker’s consent.

We’ve covered how CNN has really had a bad run in the last few weeks – fabricating stories and being caught on camera essentially saying that they are creating news instead of covering it.

In the wake of the terrible run, news broke that AT&T is discussing ways to remove Jeff Zucker from the network as part of their merger with Time Warner – which is eerily similar to the way Comcast pushed him out when they took over NBCUniversal.

Zucker is in desperation mode picking fights with everyone, including a childish President – hoping to gain SOME sort of victory.  Zucker’s move – anytime he faced a crisis – was to become the news, rather than cover it.

Zucker had a terrible run at NBC – bringing the network from status as the #1 broadcaster – to seeing ABC, CBS, and Fox rocket past them. He was even called the most destructive media executive ever to exist.

He fought his public relations battles in public, thinking that the world liked him better than personalities like Jay Leno and Conan O’Brien – he takes his position and the pseudo-fame that comes with it to heart.

After being ushered out at NBC, he produced the disastrous Katie Couric daytime talk show for ABC.

Somehow, he parlayed that into the leading role at CNN. Early on in his tenure, Zucker did bring CNN into prominence – his method was to admittedly create programing, instead of covering news. The problem is that his attitude has dashed the network’s journalistic integrity. He failed at NBC by favoring trashy reality TV over good content – now he’s doing the same at CNN and he LOVES it.

In the New York Times, Zucker bragged about his insistence to treat politics as a game – trying to copy ESPN’s methods of reporting. The profile even pointed out that CNN’s personalities were not there to deliver news or rational takes – instead calling his personalities “characters in a drama.”

Now, instead of covering a White House that gives you all the content you could ever need, Zucker has found himself embroiled in a pre-pubescent battle with Donald Trump. All Zucker has to do is take the high road and get back to NEWS.

Instead, like his battle with Jay Leno, he is using his network to fuel his ego. It was reported back then that he used NBC and friendly reporters at The New York Times to fight his PR battles. He’s doing the same now – using CNN reporters to go after meme-creators and having The New York Times paint him as some stalwart of journalism standing up to Trump.

Saying things like that Trump is trying to bully CNN – and that they won’t let him intimidate them – he’s just playing up the drama. Zucker wants to parlay this childish behavior into some sort of sensationalist story to drum up ratings – becoming the news instead reporting it. He’s bringing the news into the realm of trashy reality TV that he loves so much.

The key problem here is that Zucker is using a once respected news network to get in a battle of the wills with President Trump.

Trump, for his part – is overjoyed at Zucker’s behavior. Trump can now say, with certainty that CNN is fighting him. How does that benefit anyone? You have the President that loves saying that the mainstream media is fake and that they are dishonest – now a leading cable news network is doing exactly that!

Look, there is no doubt that Trump started this war with the media. Sure, the corporate media is less than honest, but the President has stooped to new lows in fighting them. But CNN has decided to race the President to the bottom. Watching this is like watching two kids fight – and just like with kids, you can’t win with logic or honesty – instead we’re just going to see more and more tantrums.