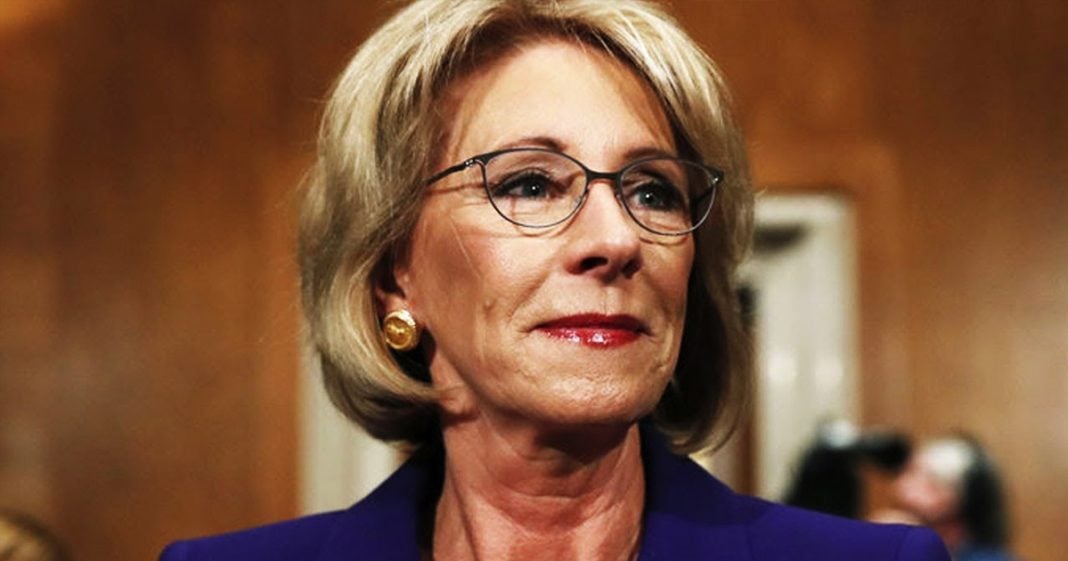 18 of the 50 states in the U.S. have joined together in a lawsuit against the Department of Education and its leader, Secretary Betsy DeVos over what appears to be a blatant bias toward for-profit schools.

The 18 states have a simple complaint: DeVos has as of yet refused to implement an Obama-era rule which would allow students who are victimized by scam schools to have an easier route to loan forgiveness.

The Borrower Defense Rule was proposed and negotiated in response to for-profit “Schools” Conrintian Colleges and ITT Technical Institute were forced to shut down hundreds of facilities after a regulatory crackdown. If implemented, the rule would allow students who had obtained loans to fund their education at a for-profit school to pursue relief if the school had been subject to federal action against them.

Basically, if the school was discovered to be a fraud, the money students had spent might be partially or completely forgiven. After all, though the “schools” may be punished by the fed, without relief, their victims will have lost substantial time and money (and may not even be able to finish their ‘degree’ thanks to the federal government’s actions).

The rule was put into place by the Obama Administration in November, but was not set to take effect until June. Instead, June came and went and no such rule was implemented.

The rule’s implementation was put on hold by DeVos, who said that her department would evaluate it before allowing it to be put into place. Her decision was made without consulting the states or the public.

As a result, the Attorneys general for the 18 states have filed the paperwork necessary to sue DeVos and the DoE for their lack of action.

Opponents of DeVos say that her decision is not based on whether or not the rule is a good one, but in an effort to protect her for-profit buddies. Allowing the rule to be implemented would raise scrutiny against these already controversial for-profit schools, hurting the bottom line of their investors.

“Since Day 1, Secretary DeVos has sided with for-profit school executives against students and families drowning in unaffordable student loans,” Massachusetts Attorney General Maura Healey said in a news release about Thursday’s court filing. “Her decision to cancel vital protections for students and taxpayers is a betrayal of her office’s responsibility and a violation of federal law. We call on Secretary DeVos and the U.S. Department of Education to restore these rules immediately.”

DeVos’s appointment to the Department of Education was a major point of contention for public school advocates who saw her cozy ties with the private and for-profit education industry as a major red flag.

With this refusal to implement what should be a common-sense rule, we see that the Secretary of Education still has no intention of providing the best stewardship of the department for students, rather than millionaires looking to make a buck off of those wishing to learn.