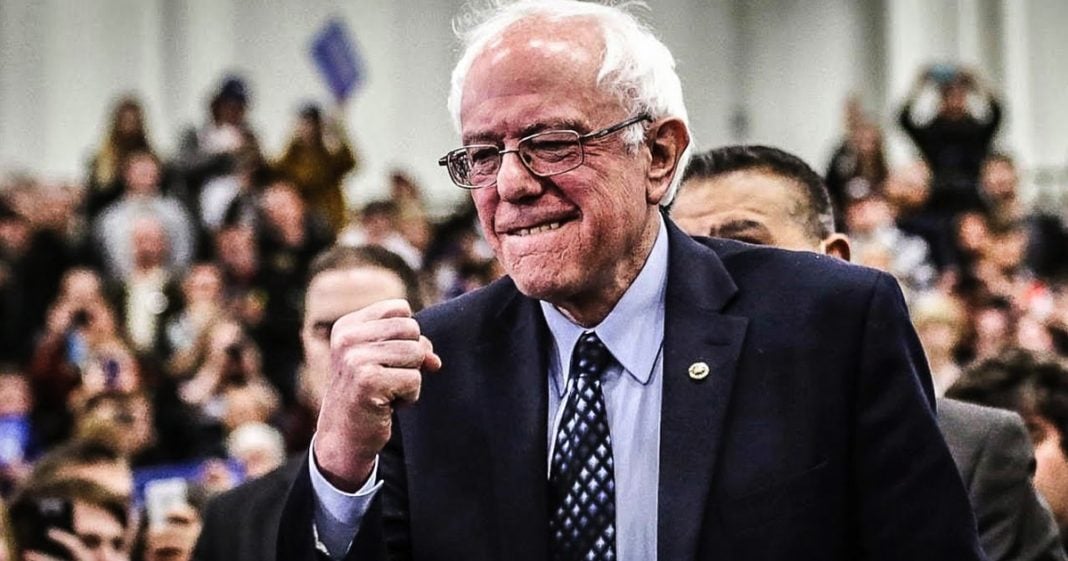 The Democratic Party needs to be paying close attention to Senator Bernie Sanders, and not just because he’s hugely popular. The Vermont Senator is on a healthcare tour where he’s attempting to educate Republican voters about the dangers of the Republican healthcare bill; He’s mobilizing his base; And he’s building his staff and messaging. Those are things that every member of the Democratic Party should be doing, but instead they still want to whine and moan about Hillary’s 2016 loss. Bernie has a lot to teach the Party, if only they were willing to listen. Ring of Fire’s Farron Cousins discusses this.

Those people absolutely hate with a passion Bernie Sanders. A passion that by no means was ever recreated by the Bernie Sanders people against Hillary Clinton. I know they claim the vitriol was there, and to a degree it was, but it is nowhere near the levels that you see coming from the former Hillary people in their hatred for a man who is trying to work to make this country work for the middle class and the underclass. That’s all he’s trying to do. Yglesias points that out and people, Democrats, did not want to accept it. Because for the most part, the Democratic Party, those hardcore establishment loyalists, they’re afraid of change, just like Republicans.

At their core, they are no different from Republicans. But if the Democratic Party had any sense in it whatsoever, they would be paying attention to what Bernie Sanders is doing and that’s the point Yglesias was trying to make. After this article came out, Bernie Sanders announced that he’s going to go around the country, go to red states, talk to red state Republican voters, and explain to them how dangerous the Republican healthcare plan is. Do you see any other members of the Democratic Party announcing plans to go do this? Are they going to go on a tour of red states? Are they going to go explain to people why the Republican healthcare plan is so bad, and why Obamacare is better?

No, the DCCC just wants people to vote Democratic because, “Look at the other guys.” That was literally what they said. That’s the campaign tactic for 2018 and 2020 for the Democratic Party, folks. “Vote for us, because we’re not as bad as those guys.” Bernie Sanders understands something that nobody in the Democratic Party seems to get right now. You have to go talk to people. You have to go engage. You have to talk policy. You have to stand by what you say, and most importantly, you have to energize, mobilize. That is what the Democrats are not doing, and that is what Bernie Sanders is so successful with, and to be honest, I think that’s why a lot of these establishment Democrats are so pissed off with him.

He’s doing what they never could. Now, they claim that he’s done nothing in his entire career. That is absolute BS, complete lies. I don’t worship at the alter of Bernie Sanders, I understand he’s under FBI investigation right now, and that’s a bad thing, especially if it turns out he did something wrong. But wasn’t Hillary under FBI investigation, too? And you guys wrote that off saying it was a witch hunt? I’m not willing to do that for Bernie Sanders, but you were willing to do it for your person, so who’s the loyalist here? All I’m saying, all Yglesias was saying in his article is that Bernie Sanders has figured it out. He’s figured out what the Democratic Party, after years of hand-wringing, doesn’t seem to get.

If you want to win, if you want to connect with people, you have to actually go out into the country and connect with people. That’s the only way it’s going to work, that’s the only way you’re going to educate people. You will not win a campaign by just trying to go out there and say, “Vote for us because we’re not as bad as the Republicans.” It didn’t work in 2016, and it will not work in the future. They could learn a thing or two from what Bernie Sanders is currently doing.