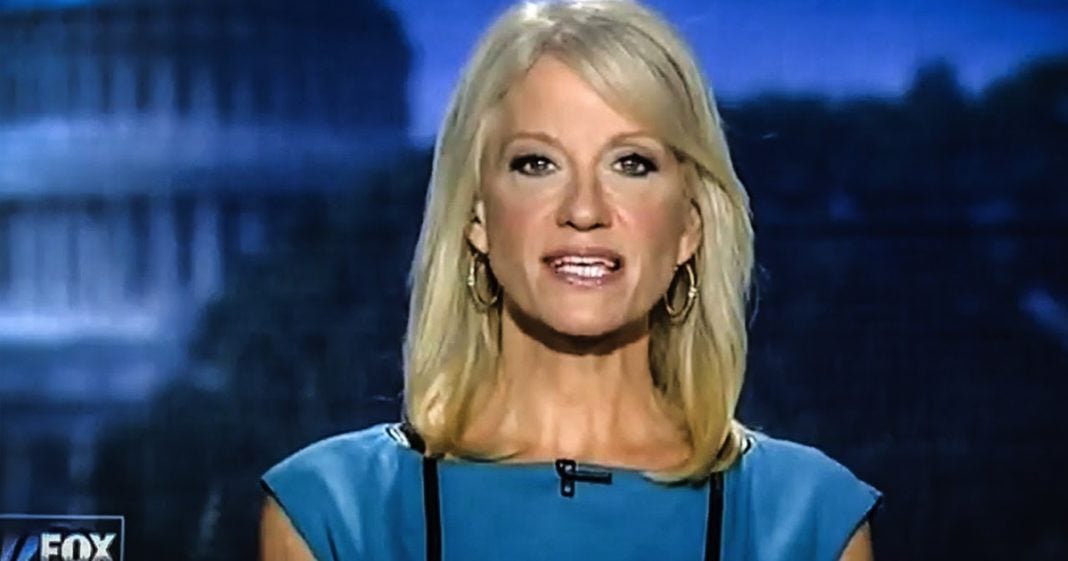 Earlier this week, Kellyanne Conway appeared on Fox News to say that the media’s obsession with Trump’s tweets is their attempt to “interfere” with his ability to communicate directly with his base. The truth is that the media covers his tweets because they have legitimate national security and diplomatic repercussions. Ring of Fire’s Farron Cousins discusses this.

Earlier this week, Kellyanne Conway, the special counselor to the president, appeared on Fox and Friends on Fox News to talk about the fact that the media just seems so obsessed with Donald Trump’s tweets. So obsessed in fact that they’re actually attempting to interfere with his ability to talk to his supporters through Twitter. Here’s a clip of what Kellyanne told the folks at Fox and Friends about the media coverage of his tweets.

Clayton Morris: I didn’t see any coverage on any of the networks this morning of this tweet, which is this. He said, “America’s men & women in uniform is the story of FREEDOM overcoming OPPRESSION, the STRONG protecting the WEAK, & GOOD defeating EVIL! USA” That’s what the president tweeted last night. Then, of course, the mainstream media coverage this morning has been all about his other tweets. Are you surprised by that?

Kellyanne Conway: No, because the media have now moved on from Russia to cover themselves. I doubt that’s going to help their 14% approval rating. The American people see that they’re trying to interfere with the president communicating directly through his very powerful social media network channels, but also they notice that they don’t cover the substance of the issues. I mean, look, I know it’s a heck of a lot easier to cover 140 characters here or there or what the president may be saying about the media here or there than it is to learn the finer points of how Medicaid is funded in this country and how that would or would not change under the Senate bill.

Several things to go ahead and correct about Kellyanne Conway’s statement. First of all, if Donald Trump, the president of the United States, uses this Twitter feed or any of the social media channels as a network to speak to his supporters, then it is the media’s job to cover it especially when he appears to be supporting violence against reporters. That’s newsworthy, Kellyanne. Perhaps you didn’t know that. Furthermore, most of the left-leaning media outlets and even some of those in the center like CNN have actually talked about the problems with the Republican healthcare plan. They do spend a lot of time talking about the tweets, and CNN is obviously understandably pretty upset about the president’s later Twitter fiasco as is MSNBC about the whole Joe and Mika thing.

But they also do talk about the issues. They talk about the fact that 22, 23 million people could lose their health insurance coverage under the Republican plan. They’re talking about that. But you’ve admitted yourself, as Donald Trump has, that you don’t watch those outlets, so how would you know what they’re covering? The only outlet you go on is Fox News because they’re the only ones who are super friendly to you and will let you get away with your constant lies.

Furthermore, this particular appearance of Kellyanne Conway is slightly disturbing. If you watch that clip you notice she wasn’t her usual self, was she? She wasn’t as energetic, as chatty. She wasn’t going off the rails. She seemed very poised and very scripted. I don’t think that that is a coincidence. I don’t think she was exhausted. I don’t think she was anticipating 4th of July and just wanted to get the hell out of there. I think the White House communication’s department is trying to crack down and keep their representatives, like Kellyanne Conway, to a specific message.

I think they’re being heavily coached. I think everything that Kellyanne Conway said during that interview were talking points that were given to her. I don’t believe that she was able to just come up with that on the fly or make up her own points. I fully believe that Kellyanne Conway was told what she had to say, the order in which to say it, and how to deliver it. That’s why she was able to misdirect the folks at Fox News and say, ‘Look, let’s not talk about his tweets. They should be talking about the policy and how Medicaid is funded.’

Okay, we don’t need to get into nuts and bolts about the federal government funding mechanisms during a TV interview. That’s not necessarily the media’s job. That’s the job of the public to learn about that. That’s the job of civics classes in high school to teach people how the government works. A lot of people already know that. I know you don’t know how the government works, Kellyanne, or your boss doesn’t know how it works, but a lot of people do have a pretty good understanding of it, and we can teach them that as we go. What we want to know is what these policies do. Trust me. As much as you say you don’t want them talking about Donald Trump’s tweets, you really don’t want them the corporate media to start talking about his policies because that conversation is going to be even unfriendlier than the ones that they’re already currently having.