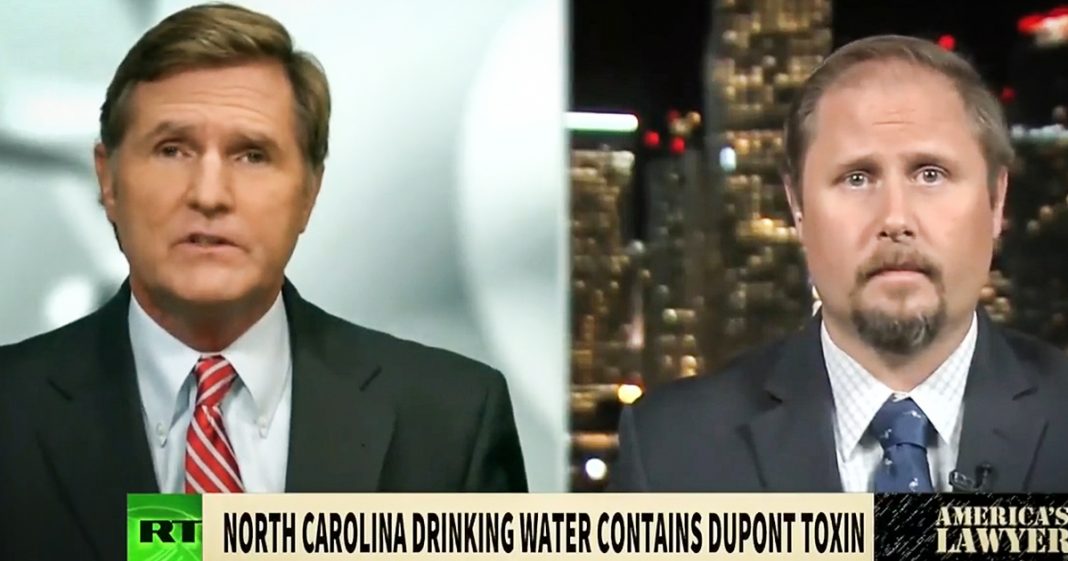 Via America’s Lawyer: Mike Papantonio discusses Dupont’s chemical called GenX that has been found in the drinking water of North Carolina residents and speaks with attorney, Chris Paulos about the case.

Mike:
In 2009, DuPont officially stopped using a chemical known as C8 in the production of Teflon, mostly in response to the massive lawsuits that the company was facing.

The company’s internal documents show that as early as 1988 they had been aware of the dangers of C8, yet they hid these dangers from the public, until the recent lawsuits exposed their coverup for the world to see.

But even before they stopped using C8, the company had been working with a new chemical that they said would replace their toxin. In 2006, they started using a new chemical called Gen X, which DuPont told both regulators and the public was far safer than C8.

The news surrounding DuPont’s Gen X chemical is unfolding the exact same way that their C8-Cancer story unfolded. Not only are we learning that this new Gen X chemical is causing cancer and reproductive problems, but that the company was FULLY AWARE of these dangers.

Dupont has filed 16 reports of “substantial risk of injury to health or the environment” over GenX.

These reports were filed with the EPA between 2006 and 2013 under Section 8-E of the Toxic Substances Control Act. That specific section of the law says that if a company is involved in the manufacture of a chemical, and they have information that “reasonably supports the conclusion” that the substance “presents a substantial risk of injury to health or the environment” then they must inform the EPA.

So in just 7 years, the company had to file 16 reports on the toxicity of the chemical that they told both regulators and the public was a whole lot safer and less toxic than C8.

GenX has been associated with dangerous health effects in test rats including cancer, changes to the immune system and problems related to reproduction.

In January 2013, DuPont said in a report that rats exposed to varying amounts of GenX over a two-year period formed cancerous tumors in the liver, pancreas, and testicles. Rats also developed benign tumors, kidney disease, and liver failure.

that they probably weren’t relevant to human health assessments — which the company has taken as a greenlight to dump these chemicals into the Cape Fear River in North Carolina.

And again, just like C8 being dumped into the Ohio River valley, we’re beginning to see this Gen X chemical popping up in people who live along Cape Fear River, and as many as 300,000 people could have been exposed to dangerous levels of this chemical.

It’s a tragic story that once again shows how criminal corporations will never change their actions, until their executives serve time behind bars.

Mike:
Joining me now to talk about the new revelations about DuPont’s GenX is attorney Chris Paulos. Chris, before we get into GenX, give us a quick rundown on C8 and how that directly relates to this story that we’re hearing about GenX.

Chris:
What’s interesting, Pap, is that through the process of litigation over the C8 chemical in the mid-Ohio valley, we got a good glimpse at what DuPont’s playbook was when terms of how they respond to these types of crises in contaminating water districts or water supplies, and it appears that DuPont is playing the exact same playbook here with GenX.

They’re initially going to decline to provide any information or any transparency into their file cabinets, into their toxicological data that they have regarding humans or animals. Then they’re going to say that there is no relevance to humans, and they’re going to downplay the amount of chemical that is in the water that people are exposed to to say there’s no health effects in humans. We’re seeing that play out as we speak in the Wilmington area, Fayetteville area in North Carolina.

Tell us what we’re beginning to see with this new chemical, GenX. What do we know?

Chris:
According to the documents that have been provided to the EPA, we’re seeing the same types of cancers in rats as we saw with C8. We’re seeing the same types of reproductive and immune system effects as well as other toxic effects to the eyes and to the lungs, to the skin of animals that are exposed to this chemical, GenX. It’s the exact same types of harm we saw animals being exposed to C8 experience. It’s eerily similar in terms of the toxicological effects on the poor animal subjects that have been exposed to this chemical. What we’re being told is that they don’t have any idea how this actually affects humans who are exposed to it through drinking water and chronically, which is frightening. Absolutely frightening.

Mike:
What’s the potential effect … The size of the population. How many people could potentially be affected here, Chris?

Chris:
What we understand is that right now the water systems that are in Wilmington, North Carolina … That is, the Cape Fear Public Utilities Association … That water system, as I understand it, serves upwards to 200,000-300,000 people. Any water system that is drawing water from the Cape Fear river below the DuPont plant there could potentially have GenX in its water. Right now, I’m not aware of any data that says that it’s actually in the groundwater.

That’s an important question that people in North Carolina need to be asking DuPont to answer: How did this chemical get in the water? How is it being released from that plant? Is it coming out through the air stacks? Is it being dumped through solid waste into unlined landfills, or is it being dumped directly into the water through process water or through the processes at the plant? Knowing that fate and transport of the chemical is absolutely critical to understanding how many people are exposed.

They’ve been looking at the toxic effects in animals for decades and decades, and it’s not until recently that we’ve seen it come out to light in the public and on the EPA docket.

Mike:
Chris, if you go back, as you pointed out earlier, and you look at the history of C8, first of all, they kept it quiet. They didn’t tell anybody that they were dumping this toxic garbage into their drinking water. Same thing here. Second of all, they come out and they tell people once everybody finds out, “Don’t worry about it. Don’t worry about it. It’s no problem here.” Then we find out, well, yeah, it is a problem because your animals, when you tested it, were dying by the tons. Then they come out and say, “Oh, well, that didn’t mean anything because they weren’t human.”

Then the next thing they do, and exactly the same thing here, they convince the media that there is no story here. “Just move on. Everything’s okay. We’re going to be all right.” Corporate media barely covered the C8 story. We’re seeing the same thing here, aren’t we? All these similarities.

Chris:
Yeah, in fact, actually DuPont tried to ban the local press from Wilmington from their first meeting with some of the public officials in that area. They tried to prevent the press from participating in that meeting. Think of the gall that it takes to actually say that no press can be present. In fact, when they did relinquish, they allowed one reporter to go in and take notes on the meeting that occurred.

To their credit, the Star News in the Wilmington area has been running stories and doing the best they can, has been asking some pretty hard-hitting questions, but they need to keep that up. They need to be persistent and they need to be diligent. There’s a lot of questions that are presently unanswered that the press and the community in Wilmington need to be asking. They need to ask, again, how did it get into their water? How is going to get out of their water? How much is in the blood and the tissues of the community members in that area? How are they going to figure that out? What are the long term health effects in humans from chronic exposure through drinking water? They need those answers, and they need to get them from DuPont. Any answer that DuPont gives them needs to be received with more than a grain of salt, with intense skepticism because this is a recidivist corporation that has poisoned thousands of people in other communities and has lied about it and covered it up in the past.

Mike:
Well, the lie went on in the Ohio Valley for C8 … It went on for 50 years, they lied to these people. They had internal documents that showed there was a relationship to cancer in C8. We’re not going to know until a water district does what they should do and say, “Look, you didn’t tell us about this. You said everything was going okay.”

Now, if this is the same situation. There is something called bio-persistence. The problem is you’ve got a product that is in the environment for at least two million years. They’re never going to be able to do anything. It’s there for two million years. How long it’s in the human body, we don’t know yet.

Anyway, Chris, stay on top of this. It’s a critically important story going forward. It’s something that we are really going to have to follow.