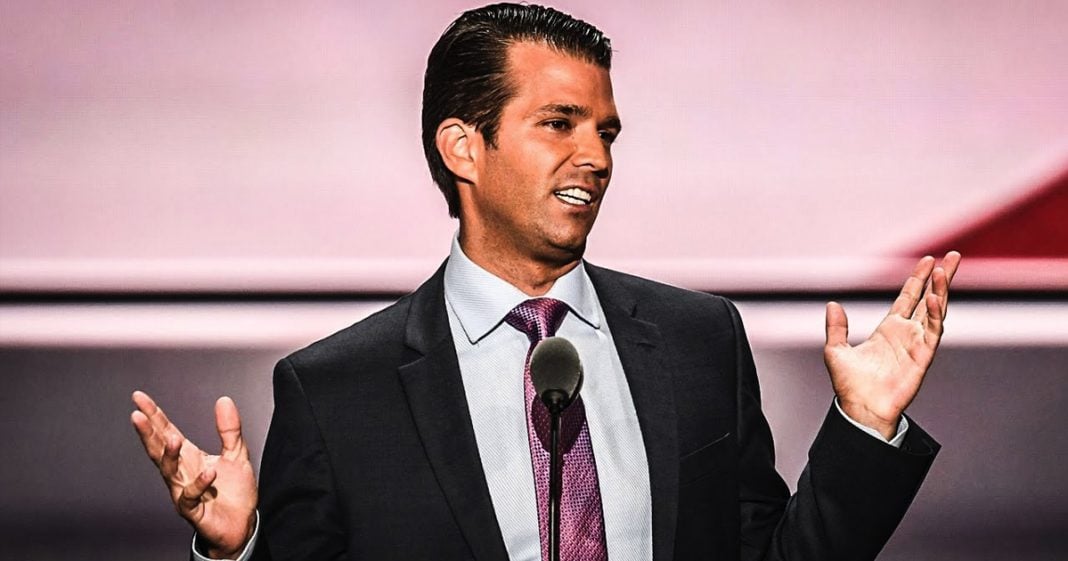 Donald Trump, Jr. is trying to show the world that his father isn’t the only member of the Trump family that can send out horrible tweets, and on the 4th of July, Don Jr. sent out a tweet attacking Democrats and progressives, implying they shouldn’t be celebrating. He would have probably gotten more support for his tweet from the Republican base if he had bothered to use spellcheck. Ring of Fire’s Farron Cousins discusses this.

In an attempt to prove that his father is not the only Trump who can tweet out stupid things, on the Fourth of July, Donald Trump, Junior, tweeted out the following. “Out of curiosity, what exactly are Big Govt, opprressive taxation, anti 2A left wing socialists celebrating today?” Well, let me go ahead and answer that, as if it even needs to be answered. Big government, Progressives, Liberals, Democrats, we’re celebrating the same thing that everybody else was celebrating. Freedom, independence, the United States of America. You, meanwhile, are insulting half the country, acting as if people who vote for Democrats have nothing to be thankful for, have nothing to celebrate. As if we are the ones attempting to destroy this country. I have news for you, Donnie, Junior. That’s your dad and your party. Those are the ones who are trying to destroy everything that’s great about this country.

And furthermore, if you’re going to get on Twitter and insult millions upon millions of people, you may want to check and make sure that all of your words are spelled correctly. No, I’m not typically one to call people out for spelling and grammar errors online. If I was, there’d be nothing else to do during the day, other than that. However, I do take a little bit of joy when somebody, like Donald Trump, Junior, who allegedly had such a fantastic education and upbringing, gets on Twitter, insults hundreds of millions of people, and misspells the word oppressive. There’s only one R, by the way, buddy.

But instead, you went on Twitter, you turned this into attack on big government, which we all know just means regulations because you think corporations should have the right to do whatever the hell they want to do, poison the environment, poison people, build defective products that, literally, get people killed because they don’t do what they’re supposed to do, but you’re fine with that. Because regulating that in Republican world is big government. Yeah. Protecting American citizens from death from corporations is just big government. And oppressive taxation? I’m pretty sure if you ask 99% of this country, If their tax rate was oppressive? They’re going to tell you, ‘No.’

The only people who bitch and whine about oppressive taxes are entitled little inheritance babies like yourself, who’ve never accomplished anything in life. You’re just living off the fat teat of your grandfather, who gave your father millions of dollars, and you’re hoping that when that man finally croaks, you get millions of dollars, as well. That’s why you think its oppressive, because the government taxes your inheritance, as they should. So go ahead, get on Twitter, prove that you’re just as dumb, if not dumber, than your father. But the American people, Left, Right, and Center, have things to celebrate today. It’s your father and your party that’s trying to take away those things from this entire country, regardless of their political party.