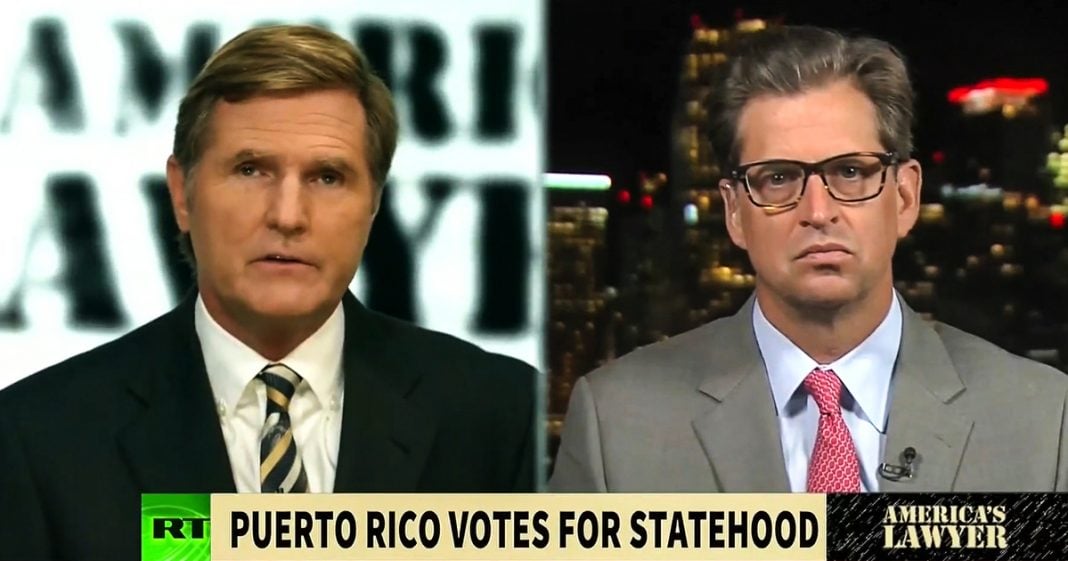 Papantonio: According to a 2016 YouGov poll, only 43% of Americans know that Puerto Ricans are U.S. citizens. While 41% believe they are not. But Puerto Rico has been an American territory since the end of the Spanish-American war in 1898. For the 400 years prior to that, it was a Spanish colony. In 1917, The Jones Act officially made Puerto Rican residents citizens of the United States. And in 1950 President Harry Truman signed a law that officially made the island a commonwealth under U.S. control.

In spite of the fact that Puerto Rico is a commonwealth of the United States and its residents are US citizens, Puerto Ricans do not get to enjoy many of the benefits that come along with American citizenship. For example, they aren’t allowed to vote in U.S. presidential elections, even though they do hold primaries for presidential candidates. They have a representative in Washington, D.C. who is not allowed to vote on legislation or other issues. And they don’t receive the same kind of federal financing as other states.

Of course, residents also don’t have to pay a federal income tax, they have their own Constitution, and they still get the full protection of the United States military. So while there are obvious drawbacks and benefits to being a commonwealth rather than an official state, residents on the island have typically remained divided about whether or not they want to officially join the U.S. as the 51st state. Or at least, there was a deep divide until predatory bankers from financial institutions like Santander got their hands on the island and created one of the worst financial disasters in modern history.

If Puerto Rico were a state entity, it would be allowed to get out from under its massive cloud of debt by declaring bankruptcy. Instead, the U.S. House of Representatives has appointed a financial committee that is forcing regressive austerity measures on the people of Puerto Rico. But things could change in the near future.

Earlier this month, voters in Puerto Rico approved a measure requesting statehood, by more than 97%, but only 23% of the population actually showed up to vote. Nevertheless, the measure will now be presented to Congress, who has the final say in whether or not Puerto Rico can officially join the union. To become the 51st state, Congress would have to pass a statute to admit Puerto Rico as a state, and that’s a conversation that has been going on for decades.

For more on this issue, let’s go to Attorney Peter Mougey, who’s working with the government and citizens of Puerto Rico to hold Wall Street bankers accountable for their financial destruction of Puerto Rico. That’s the only way you can describe it, is financial destruction. Peter, give us some more history on Puerto Rico. Why did the US decide to make them a commonwealth rather than a state to begin with? Tell us a little bit about that history.

Mougey: It’s amazing. Whether you look at the Philippines, Guam, which all came as part of the solution to the Spanish American War, the world shrunk dramatically over the last couple of decades. Back when this deal was cut in 1898, early 1900s, the world was huge. The commonwealth, we couldn’t have states that were so far away, so a lot of the reasoning, the principles behind having a commonwealth or having territories, whether it be Guam, the Philippines, and especially your Puerto Rico, it was just, they were so far away that making them a state seemed just unfathomable, just because of the sheer distance.

Now, the world shrunk. There’s almost as many Puerto Ricans living in New York as there are in San Juan, so the world has become smaller and the rationale for keeping Puerto Rico a commonwealth or a territory are days gone by, decades old, and the principles and policies are outdated. We should definitely take a fresh look at making Puerto Rico another state.

Papantonio: I’ve got to tell you. The US, as you know, you followed this history a long time, has been the primary predator in Puerto Rico. I mean, when you really start understanding the history of how the US has been such a predator, it’s easy to really appreciate. You’ve obviously spent a lot of time down in Puerto Rico. Can you tell us how the residents you’ve encountered feel about having their island actually become a US state after this vote? What’s your take?

Mougey: It’s kind of a mixed bag. I think they fall into three separate camps. One camp is to remain a commonwealth. Another camp is to become a state. The others is, just become their own territory. One thing that’s consistent amongst all three of those camps is, the pride in Puerto Rico, the culture, the customs, the beautiful landscape, all of the natural resources. I think it depends on who you talk to. I think it depends how comfortable people are, but it’s embarrassing what we’ve done, the colonialism kind of component to what we’ve done in Puerto Rico, and stripped the citizens of a lot of their rights. We’ve taken away opportunities.

You go back to the Boston Tea Party. We fought a war over taxation without representation, and we tax the Puerto Ricans heavily. Everybody always points to the fact that they don’t pay … Puerto Ricans don’t pay federal income tax, but we more than make up for that here on the mainland by how much we tax Puerto Ricans for their estate tax, which are hundreds of percent higher and don’t have the cap that we have in the states, that up to five or six million dollars isn’t taxed. Puerto Ricans don’t have that luxury. We tax them state taxes all the way down to the smallest amounts, so it’s time to take a fresh look at this.

Papantonio: Peter, you know what’s always been so ugly about this story is the way that the right wing, the conservatives, say, ‘Well, if we make them a state, all we’re really doing is bringing into the United States more of a welfare state.’ As if, just making them a state, by doing that, it’s going to be a bigger burden on the US taxpayers. Those are always the arguments that you hear the right wing talking about, but you don’t hear about the other side of that story. It’s almost as if the media has done such a poor job telling the story about how the US has been such predators down there in Puerto Rico.

Look. We know that the recent vote, even though the turnout was low, approved a measure to move forward with statehood. Where does it go now? The state said, even though it was a small turnout, 23% turned out, 97% of that turnout said, ‘Yeah. We want to become a state.’ Where does this go now and what is, in your take, the likelihood of that happening with this particular Congress that we have right now?

Mougey: In order for Puerto Rico to become a state, there has to be a joint resolution from both Congress and the
president. As I think we both agree, that the likelihood of that happening is small, but as far as the right wing side saying that this is another welfare state, the reason why Puerto Ricans are going through a lot of the economic mess is because of some of the policies that we’ve implemented there on the island. They don’t get the same, the type of favorable financing for, whether it be infrastructure or incentives. We yanked most of the incentives off the island in 2006, which had a devastating impact and opened the door for these Wall Street banks to come in and start pitching borrowing and debt raising as a way out of this problem. We have helped create the mess with our policies and it’s time we fix them and give the Puerto Ricans the same type of access to our government decision making as the rest of the states have obviously had for hundreds of years.

Papantonio: Peter, as I look at this history, it’s almost as if, in 2006, we opened the door to every Wall Street thug. There’s no other way to describe these predators. They’re Wall Street predators. They are thugs who have taken these people’s pension programs. They’ve taken their life savings, and now they’re complaining that they didn’t have anything … They had nothing to do with the financial state of Puerto Rico. They had nothing to do with the potential of bankruptcy here. What is your take? How bad was the predatory system that was coming directly from the United States Wall Street when we let these criminals, these banking criminals, go down to Puerto Rico and do what they wanted to do? What’s your take?

Mougey: I’ll tell you what. We had another example. We opened the door for allowing some of this to happen. The 1940 Act, which is the act that prohibits affiliated transactions within companies, so if you take Santander that you mentioned, or some of the other broker dealers on the island, it alleviates those Chinese walls. It has put fertilizer down. It planted the fields for this type of conduct, where these firms came in and recommended debt. Why did they recommend they issue so much debt? Because, they made fees on the underwriting deals. They were underwriters. They were consultants for these deals.

They put them in their own closed end funds and they sold them to their own clients. That’s illegal on the mainland, but it’s not illegal in Puerto Rico. Why? Because, 1940, when the Investment Advisor Act was implemented, that seemed so far away and remote that we couldn’t police them, so we’ve never updated those protection policies to protect investors, which opened the door for Wall Street to come in, issue bonds. 1.6 billion dollars in fees, Pap, over the last several years before this thing blew up, Wall Street firms made on fees, syndicate, spreads, you name it. Absolutely unbelievable what we’ve allowed to go on down there. Now, who’s left holding the bag? Puerto Rican citizens that are left standing there with their investments blown up and their island policies, economic policies, in shambles, in large part because of what we’ve done down there.

Papantonio: Yeah. These cats in Armani suits and Rolex watches, nobody’s going to go to prison over this. Nobody. But look, I’ve got to ask you. Would bankruptcy protection do anything to help the island’s financial problems? Are they so far gone at this point that they’re … How do they return, in part, from the disaster of letting predatory Wall Street thugs go down there and do what they did? Can they recover?

Mougey: There is no doubt that they are too far down. $72 billion. There’s more debt issued on the island than any place per capita on the mainland. Why? Because, this was all built on a house of cards, conflicts of interest. Chapter 9 and Chapter 11 PROMESA, which is under President Obama. PROMESA was established, took components of both Chapter 9 and Chapter 11. It essentially gives Puerto Rico an opportunity to kind of tap the brakes, do an assessment, kind of slow down the creditors from coming in and filing suit. It’s halted the litigation and kind of just kept everything at status quo. But, there’s no doubt, 72 billion dollars, they can’t tax their way out of this.

Papantonio: All right. Peter, thanks for joining me. Okay.