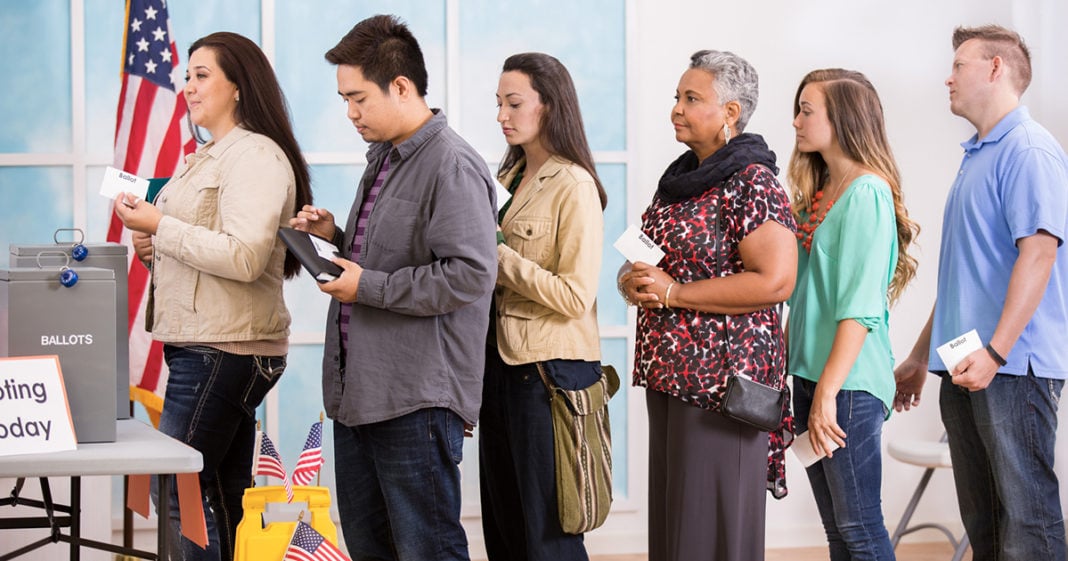 Trump made no secret last year that his priority was to discourage and prevent voting among those most likely to oppose him – namely, African-Americans, younger women and white progressives. Last October, his campaign officials were quite frank about this, telling Bloomberg News about the strategies they were employing in order to suppress the vote among that demographic. Now that Trump has wormed his way into the White House, he is attempting use yet another executive order so as to cement his grip on power by further disenfranchising voters most likely to oppose him.

The good news is that states are having none of it.

The latest attempt to limit voter participation is through what they euphemistically refer to as an “election integrity” commission. This commission is co-chaired by theocrat Mike Pence and civil liberties opponent Kris Kobach, who as Kansas Secretary of State, passed the so-called “Secure and Fair Elections (SAFE) Act”  in 2011.

At the time, Kobach used the same tired old argument: the law is needed in order to prevent non-U.S. Citizens from registering to vote, which he would have us all believe is the greatest threat to democracy. It requires new Kansas residents to prove their citizenship, show photo ID when voting, and supply either a Kansas driver’s license or state-issued ID number when voting by mail. This effectively shuts out many low-income and minority voters – which, of course, was the whole idea in the first place.

Now, aided and abetted by the Trump Administration, Kobach plans to extend his reincarnation of “Jim Crow” to the entire nation. Trump’s “election integrity” commission is demanding that state governments provide the name, address, date of birth, political affiliation, voter record, and last four digits of the Social Security number of every registered voter. In addition, this “commission” wants information on any and all military service records, felony convictions, and whether voters are registered in more than one state or hold more than one passport.

So far, three states – California, Kentucky and Virginia – have told Trump and his commission what they can do with their demands. California’s Secretary of State Alex Padilla has refused to “provide sensitive voter information to a commission that has already inaccurately passed judgment that millions of Californians voted illegally,” which he says “would only serve to legitimize the false and already debunked claims of massive voter fraud made by the president, vice president, and Kobach.”

Kentucky’s Secretary of State, Alison Grimes, and also refused, calling it “at best a waste of taxpayer money and at worst an attempt to legitimize voter suppression efforts across the country.”

Meanwhile, in Virginia, Governor Terry McAuliffe has announced that he has “no intention” of complying, adding, “At best this commission was set up as a pretext to validate Donald Trump’s alternative election facts, and at worst is a tool to commit large-scale voter suppression.”

A fourth state, Connecticut, is also joining the resistance to Trump’s blatant attempt to lock out the majority of voters who stand against him. Connecticut’s Secretary of State, Denise Merrill, has agreed to provide the commission with “publicly available data” (basically, names and addresses, which can be legally accessed by anyone online), but nothing more. Nor will she be in any hurry to meet the commission’s deadline, set for July 14th.  Merrill is also demanding to know exactly why the commission is asking for this information.

Hopefully, more states will join the resistance as they have in other matters. On this 241st anniversary of the signing of the Declaration of Independence, it’s worth remembering that one of the primary issues that motivated the colonies’ rebellion was the fact that they were being governed by lawmakers and administrators across the ocean who had virtually no accountability to those they presumed to govern.

Now, the states find themselves in the same position as the original thirteen colonies: they are being subject to policies and demands by corrupt lawmakers and enforcers in Washington DC who no longer bother hide the fact that they have no interest in representing the will and the needs of those they claim to “represent.”

We can expect no help from a GOP-controlled Congress. It’s time for state houses to draw a line in the sand.