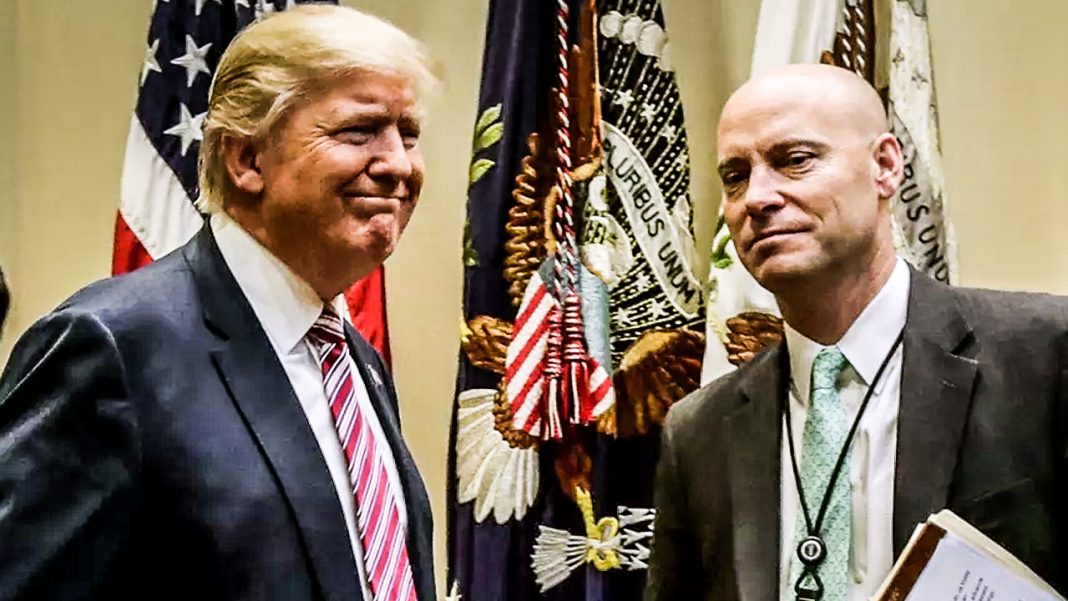 Over the weekend, President Trump’s director of legislative affairs Marc Short appeared on Fox News to explain that the GOP healthcare plan isn’t kicking anyone off of their health insurance policies, but instead giving them the option to “choose” to lose their healthcare.  This is becoming the standard Republican talking point on healthcare, and it is an absolute lie. Ring of Fire’s Farron Cousins discusses this.

President Trump’s director of legislative affairs, Marc Short, appeared on Fox News Sunday this past weekend to repeat what has become the standard Republican talking point about their healthcare legislation. Marc Short told the folks at Fox News that people will not be losing their health insurance under these Republican plans. Instead, people are going to be choosing to not have health insurance, which is the same thing that Paul Ryan said in an interview with Fox News last week, and Fox News seems more than willing to allow these Republicans come on the air and tell everyone that you’re not losing it, you’re making the choice to no longer have it, which could not be further from the truth, but do you see what they’re doing with this little bit of misdirection?

By saying that it’s the consumer’s choice, they’re attempting to shift the blame from themselves with their horrible policy back onto the American people. You can already see a campaign talking point developing here. If they pass this legislation and 23 million people lose their health insurance, how’s that going to play out in 2018? Obviously, Republicans would be in for a hell of a fight and that’s why they’re developing this talking point now. Because technically sure, nobody’s getting kicked off their health insurance right now, but you’re stripping them of the means to be able to afford it and that is the rebuttal to that talking point. To be honest, I don’t think the Democratic party is smart enough to use that talking point.

I think they’re going to allow the Republicans like they’re allowing them to do right now, hijack this message, twist it around, and make people think that they honestly chose to give up their health insurance. Here’s the reality of what this healthcare bill does in case anybody needs a reminder. This healthcare is going to strip 800 billion dollars from Medicaid. Not only will that cause people to be unable to afford health insurance, it’s going to result in the closing of hospitals and the closing of nursing homes, which overwhelmingly rely on Medicaid funding to stay open. Those people, without those hospitals, without those hospices, without those nursing homes, will die. That is not an overstatement. That is what the CBO score tells us.

Even in this interview that Marc Short gave this past weekend, he says that the CBO is biased. They’ve got some kind of pro Democratic slant, which even Republicans and Democrats have said that’s actually not even possible, but Republicans are going to do whatever they can to spin this healthcare bill as a good thing and to tell people we’re giving you your choice back. Suddenly Republicans are the pro choice party when it comes to living and dying or buying healthcare I guess, but the reality is that people are being stripped of their healthcare coverage by being stripped of the financing that they rely on to be able to purchase this coverage.

Without that Medicaid money, without the Obamacare subsidy money, without those tax breaks for low income people to buy health insurance, people will not be able to afford it. When you can’t afford something, that’s not a choice. You’re having your choice stripped from you. Because right now they do have a choice. They can either opt in and get those subsidies to pay for this or they can opt out and just pay a penalty. They have a choice today but if this Republican healthcare plan passes, millions of Americans are losing their choice on whether or not to have health insurance and it will have deadly consequences.