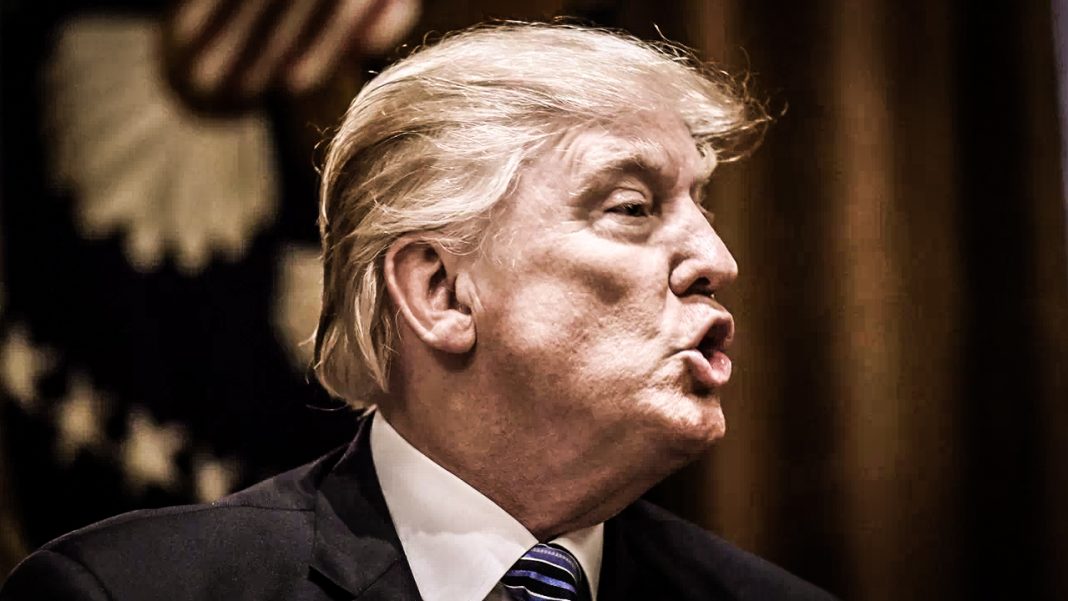 Donald Trump’s recent Twitter fiasco is far more important than most people realize.  Far from being a distraction, Trump’s tweets inspire violence among his supporters, and attack an institution – the media – that is Constitutionally protected from the federal government.  His tweets might seem like a distraction, but they are actually an assault on the U.S. Constitution. Ring of Fire’s Farron Cousins discusses this.

News over the weekend was buzzing over the fact that Donald Trump re-tweeted an image of himself basically beating up somebody with a CNN logo over their faces from an old WWE broadcast and Donald Trump used it to show how tough he is against the so-called fake news, but what really happened was that Donald Trump got skewered on Twitter by both democrats and republicans for acting like a petulant child, which is pretty much what he is.

Now Donald Trump doesn’t seem to understand the kind of dignity that goes with having and holding the office of the US president, but it’s something that he needs to learn pretty quickly. You see our global image, the way people outside this country view the United States is falling at a rapid pace. In fact, in just his first five months in office, he’s already sank the US’ image lower than George W. Bush did after eight years.

But furthermore, his little tweet there with him beating up CNN inspires violence. CNN has been talking over the weekend about the fact that this is going to end up getting a reporter either seriously hurt or possibly killed. Last week Sarah Huckabee Sanders, deputy press secretary for the president said that Donald Trump has never encouraged violence, in fact quite the opposite is true she told us. Well first of all we know that even before this little Twitter incident, that was not true. There is plenty of video and audio of him from rallies saying: Get them out of here, toss them out of here, throw them out of here. He has inspired plenty of violence, we know that. He has encouraged it. That’s why he got sued for doing so, but he has to be held to a higher standard. He is the president of the United States. He can’t go on Twitter like he did Saturday morning and call Mika Brzezinski “Dumb as a rock.” Regardless of your opinion of Mika of which I do not hold a very high one, the sitting president of the United States should not refer to someone as “dumb as a rock.” That is beneath the dignity of that office and that is why his tweets do matter.

His own co-writer, this past weekend came out and said these tweets are not a distraction because Trump’s not smart enough to come up with that. That’s the other side of the story here. A lot of progressives are saying we have to focus on other things other than these tweets and that’s fine, we are, but these tweets are not dismissible when they have potential world war consequences. As we’re seeing with the way the rest of the world views the United States. With the way they view Donald Trump. With the fact that they no longer want to travel to the United States because of Donald Trump, which costs us billions of dollars in economic tourism.

Yes, these tweets are a problem. They’re a problem for everyone, but more importantly they show us the real character of Donald Trump, that most of us were trying to warn this country about for a year and a half since he announced he was running for president. These tweets are by no means shocking. We’re not shocked by this behavior, we fully expected it, predicted it and warned everyone about it, but the fact that he hasn’t changed. The fact that he doesn’t understand that he has to be held to a higher standard. The fact that he doesn’t understand that his base is more than likely going to take his words as a call to action. That’s the problem and that’s why we cannot simply just say that these tweets are dismissible. There’s something that has to be discussed and to be honest, there are things that could potentially prove that this president is mentally unfit to hold his job. To be honest that’s probably one of the most important reasons why we have to keep talking about these tweets.