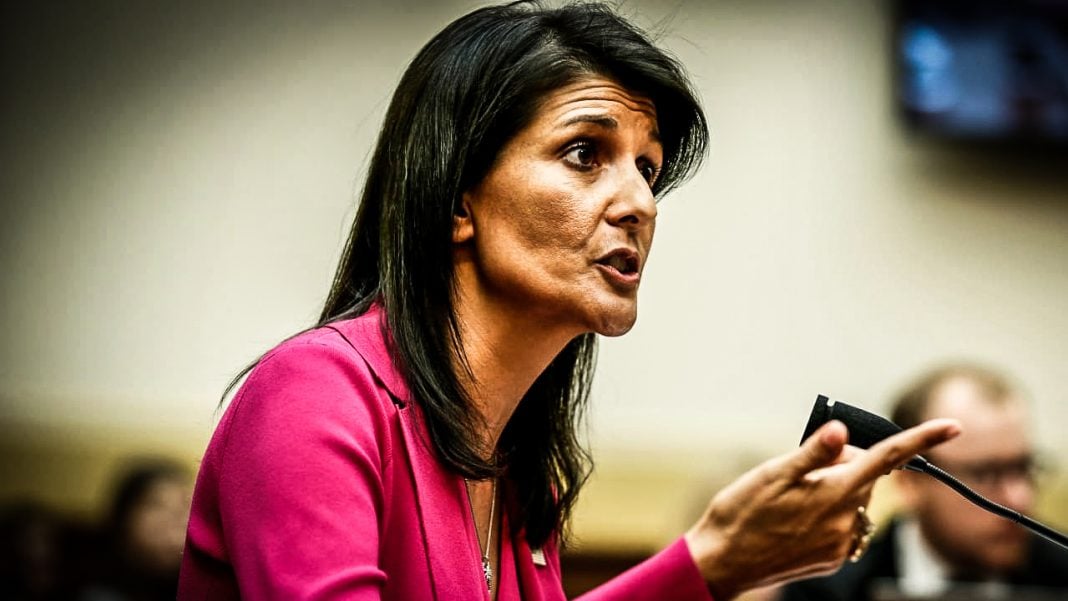 Nikki Haley, the former Republican governor of South Carolina who now serves as Donald Trump’s UN Ambassador, boasted on Twitter this week that they had slashed nearly half a billion dollars from the UN’s peacekeeping budget.  This administration clearly doesn’t want peace, and I’m sure the corporate-controlled media is salivating over the idea of even more endless wars and fewer dollars available to keep the peace. Ring of Fire’s Farron Cousins discusses this.

Donald Trump’s UN ambassador Nikki Haley who formerly was the governor of South Carolina boasted earlier this week about the fact that as UN ambassador she has gotten that organization, the United Nations, to cut almost half a billion dollars from their peacekeeping budget in just five months. And according to the tweet she sent out, they’re just getting started, which his a good thing, right? I mean, we’re all pretty tired of peace. We hate these organizations coming out there saying, “Be nice to each other.” Or even worse when they’re like, “Hey, let’s talk about this diplomatically.” I mean, everybody hates that, right Nikki? It’s so good that you’re helping them cut hundreds of millions of dollars from their peacekeeping operations. After all, I mean, that’s what Jesus taught us to do, right? And if we look back in Matthew 5:9, where it says, “Blessed are the peacemakers, for they should be called the children of God.”

Oh, wait. You’re actually doing the exact opposite of that. What the hell happened? I thought republicans were the party of Jesus, the party of hardcore religious evangelicals. You are literally, and you do this actually in every walk of life in terms of republican politics, you’re literally going against what the bible was telling you to do. I know Nikki Haley was raised as a Sikh, but she also has baptist beliefs, attends a baptist church, so you should know this.

But further more, take religion out of it. I’m just using that as a point to display your hypocrisy and the hypocrisy of all republicans. The bottom line is this, who in the hell thinks we should stop spending money on peacekeeping efforts? I’ll give you the answer to that. One is the corporate media who makes a ton of money anytime there’s some kind of conflict around the world, and the second are defense contractors who make even more money than the corporate media anytime there’s a conflict in the world.

Don’t ever, ever brag about cutting money for peacekeeping operations. That’s like saying, “Hey, we just got rid of all these clean water rules so now corporations can once again dump all their toxins in the water without having to worry about shipping it out.” Oh, actually, you already did that earlier this week as well.

Do you people just hate people? I mean really, like do republicans just have a complete disdain for all of human life? They either want to poison us with corporate toxins or they want us to be engaged in endless wars where just it’s bloody and everybody dies, because that’s the impression that you’re giving at this point by bragging about the fact that you just cut half a billion dollars from the UN’s peacekeeping mission.

I’m sure that’s probably a great thing to go ahead and slap on your resume Nikki Haley, because that’s about the only accomplishment you have to your name. Bragging that we’re going to make the world slightly less peaceful. We’re going to do even less to prevent arm conflict around the world. After all, I think if Donald Trump is looking for a new slogan for his 2020 campaign, that could be it: Doing everything possible to reduce the amount of peace on this planet. Trump 2020.