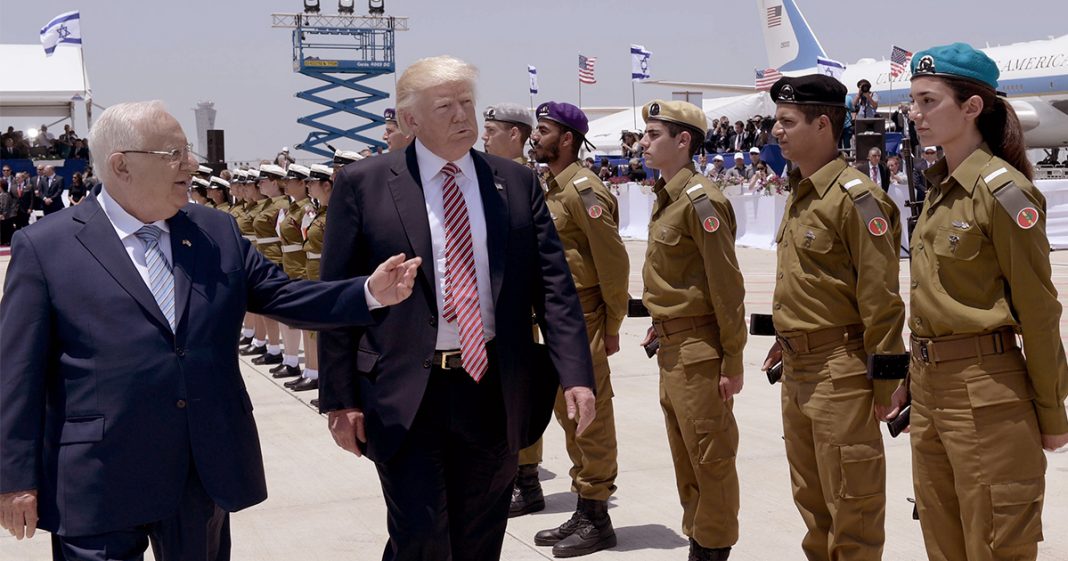 Statements from @PressSec on #syria pic.twitter.com/gEqPAf6WBk

While the highest ranking members of the Trump administration backed Spicer’s statement, many key officials were left in the dark about the White House’s statement,insisting that they were unaware of Syria’s movements. In fact, many experts believe that the evidence for another chemical attack (as well as the one in April) may be completely made up. This was not a carefully crafted diplomatic plan; it was a shot across the bow. But why?

Nikki Haley, the US Ambassador to the UN, made things more transparent by putting both Russia and Iran on notice, heightening tensions.

Any further attacks done to the people of Syria will be blamed on Assad, but also on Russia & Iran who support him killing his own people.

Haley’s statement is extremely telling of the ultimate goal in the Middle East for the United States: war with Iran.

Aside from the corporate media and lobbyist-friendly politicians being giddy over the prospect of any armed conflict, why would a war with Iran be a key goal for the United States? The entire thing revolves around Trump’s love for Israel and Saudi Arabia.

Back in November, fresh off of Donald Trump’s win, Bloomberg reported that Israeli Prime Minister Benjamin Netanyahu saw Trump’s presidency as an opportunity to crack down on Iran’s power in the region. President Obama’s nuclear deal with Iran was extremely unpopular with Netanyahu and hoped that President Trump would help contain the problem with Iran. Iran is no fan of the deal either, but agreed to it in order to help bolster their failing economy. Trump has bashed the deal, which has made him plenty of fans in Israel.

The Iran deal is terrible. Why didn’t we get the uranium stockpile – it was sent to Russia. #SOTU

President Trump is indeed widely supported in Israel, where a recent Pew Survey showed that Israelis support Trump’s actions on everything from the Mexican border wall and climate change, and especially his hard line on Iran. Overall, 56 percent of Israelis have confidence in President Trump “to do the right thing regarding world affairs.”

That makes perfect sense, considering that the Bloomberg’s report from November now seems clairvoyant as the United States has essentially been doing Netanyahu’s bidding. Bloomberg spoke with Robert Satloff, executive director of the Washington Institute for Near East Policy regarding Israel’s wishes for the Iran nuclear pact:

Although Netanyahu still adamantly opposes the deal, he isn’t likely to press for its dismantlement because that would allow Iran to shirk its obligations under the accord’s terms, according to a person familiar with the matter. Even if Trump did tear up the agreement, it would be nearly impossible for him to persuade other world powers to reapply sanctions and stop trading with Iran, Satloff said. A U.S. decision to back out of the deal would almost certainly embolden Iran’s hardliners, who opposed it, he said.

“The argument will be to work hand in hand with Israel on tightening the noose around Iran rather than sever the deal and open up a Pandora’s box between America and global powers, freeing Iran from whatever constraints that currently exist,” Satloff said.

Indeed, last month, the Trump administration chose to renew key parts of the 2015 Iran deal, while it also imposed sanctions on Iranian and Chinese companies for their support of Iran’s ballistic missile program. Iran is also named in President Trump’s travel ban. Without backing out of the deal, Trump has indeed put pressure on Iran, just as Netanyahu wanted.

Iran, for its part, has long backed Hezbollah, an organization which has fought with Israel over the years and now is looking to strengthen its bond with Palestinian forces in anticipation of further conflict in Gaza. Hezbollah, coincidentally, is also supporting Assad-backed forces in Syria. In the long chain of proxy conflict in the Middle East, it is becoming more clear that our attacks on Syria are indeed attacks on Iran and Hezzbollah, on behalf of Israel.

Likewise, the United States has made no secret of their love affair with the Kingdom of Saudi Arabia. With the $110 billion arms deal, the US has strengthened their ties with Saudi Arabia, who is also ready to engage Iran in conflict. Saudi Arabia has long fought in proxy conflicts with Iran. Syria, Iraq, Yemen, Afghanistan, Pakistan, Bahrain, and Qatar have all served as stand-ins for a Saudi-Iranian war.

Despite any unease over Saudi involvement in 9/11 or any anti-American sentiment within the Kingdom, the United States has massive business ties to the Kingdom of Saudi Arabia, making them a key ally. Last year, DTN reported on the economic impact of Saudi money in the United States:

Estimates put the figure of official Saudi assets in the government at somewhere between $500 billion and $1 trillion when considering potential foreign bank deposits and offshore accounts.

The kingdom had $96.5 billion in holdings of Treasury securities in August, according to the most recent number released by the Treasury Department. Saudi Arabia ranked 15th in its holdings of U.S. Treasury debt.

The Kingdom also has strong lobbying power according to The Intercept. John Podesta’s Podesta Group, Madeleine Albright’s Albright Stonebridge Group, Washington Post columnist Ed Rogers, and former Senator Norm Coleman are all on the roster of the Kingdom’s lobbying efforts.

President Trump even appointed Richard Hohlt, a registered Saudi lobbying agent to the President’s Commission on White House Fellowships. In total, Saudi Arabia has spent over $18 million in lobbying efforts since 2015, which is $11 million more than Google spent lobbying in the same time frame.

Additionally, Saudi Arabia has made sure to buy influence with key political players, contributing between $10 and $25 million to the Clinton Foundation in addition to $1 million donated to the McCain Institute.

The complex situation is enough to make one’s head spin. The United States’ partnership with Saudi Arabia is the perfect connection to support Israel in their efforts to contain Iran. Meanwhile, the Syrian conflict has proved to be the perfect battlefield to start the fight.

Still, none of this addresses the elephant in the room, Russia. Russia is quite friendly to Iran and Syria, as they seek to push back against Western influence in the area. Israel has made it clear that they want to avoid making Putin angry over the whole affair, while American leaders love the prospect of a renewed Cold War.

This all means that the war-obsessed media and special interest-owned politicians will back this conflict wholeheartedly. But, that also means that the public may not actually be told of any official action against Iran. It will all be sold to us under the guise of fighting terrorists or preventing chemical attacks.

Sure, the media is breathless in their coverage of things like launching Tomahawk missiles at a Syrian airbase, or the MOAB being dropped on Afghan tunnels. But, pushing for a formally-declared all-out war with Iran would likely be a tougher sell to the American public. That is precisely why the Trump administration has been carefully tip-toeing into war through any proxy channel available, like Syria.

Shooting down Syrian planes and Iranian drones, dropping bombs that have killed more than 4,000 civilians (while we condemn an alleged chemical attack that killed 74), and stationing missile launchers and support troops in areas of Syria where ISIS is not operating has thus-far only been routine news, to Trump’s benefit.

For the Trump administration, it truly is the best situation to start a war with limited attention. The President has enjoyed the fact that this prelude to war has largely escaped criticism and heated debate.

However, the very moment Iran, Hezzbolah, Syria, or Russia retaliates against our aggression, Trump’s war will garner widespread support, surely giving him a boost in the polls. It could even serve to put to rest many of the Russian collusion allegations surrounding the administration.

Trump will certainly benefit from a conflict with Iran and so will defense contractors and the corporate media as they laugh all the way to the bank.