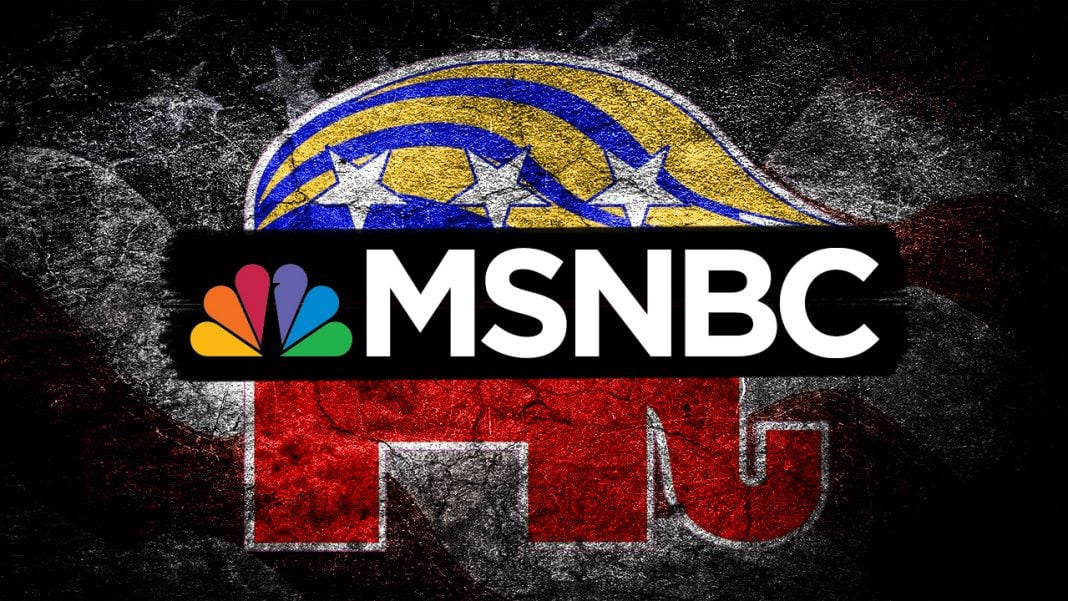 MSNBC has announced even more right wing hires this week, adding in a climate change denier from The New York Times and bringing in lie-spewing right wing talkers like Hugh Hewitt.  This is not a liberal news organization, so can we please stop pretending that this network is out there fighting for us? Ring of Fire’s Farron Cousins discusses this.

MSNBC is not a progressive, liberal, or even democratic news network. I’m getting kind of tired of hearing people defending the network, saying that, “Oh, but Rachel Maddow does great stuff. Oh, Chris Hayes. He’s so smart and wonderful.” Behind the scenes, the network is exactly just like every other corporate media outlet. That’s why, over the last few months, MSNBC has been hiring conservatives at a fevered pitch. Brett Stevens from the New York Times, a noted climate change denier, is now among the staff at MSNBC. Hugh Hewitt, hateful right-wing talker, now among the staff at MSNBC. Megyn Kelly has a job at NBC News. Do you see a pattern developing here? Do you see what’s happening to MSNBC ever since they were bought out by Comcast?

I mean, we had great progressive voices on that network: Al Sharpton, Ed Schultz. Those people are now gone. They were let go for some ungodly reason. They claimed it was for ratings purposes, but at the time their ratings were actually equal to those of Chris Hayes, who for some reason is still on the network. MSNBC is moving further and further to the right because they think that is what this country wants. Now that they finally beat Fox News in the ratings for the first time in 17 years, they think they’re going to ride that wave and pick up all of those disaffected Fox viewers by moving to the right, by espousing some conservative values. The network is just as disgusting as Fox News, folks. Don’t kid yourself.

Yeah, sometimes Rachel Maddow, Chris Hayes, Lawrence O’Donnell, sometimes they report really great things, but they’re still missing a lot of stories. They’re not out there talking about the corporations that are poisoning American citizens. They’re not talking about the pharmaceutical companies that are putting out drugs that are killing and crippling Americans just so Big Pharma can make a profit. They’re missing the big stories and they’re focusing, for the most part, on the sensational ones just to get ratings because, at the end of the day, that’s what they’re all about. Unfortunately, due to the way capitalism is basically set up, the laws within it, they have to. According to American law, any corporation has to act within the best interest of its shareholders — not the viewers, not the public, not their consumers, but the shareholders — which means they have to legally do whatever they can to make as much money as possible. That’s what MSNBC thinks that it’s doing here.

What’s going to happen is that they’re going to turn into Fox News Light. They might draw a few Fox viewers at first, but eventually they’ll go back to Fox. The progressives, the liberals, will leave MSNBC and soon enough this network is going to once again find itself at the bottom of the pack. To be honest, at this point, kind of where they deserve to be. Fox News is fun for a laugh. It’s fun to get on here and point out all the stupid things they say and how crazy their audience must be for believing them, but MSNBC is more dangerous because it’s a network that masquerades itself as some kind of liberal progressive voice in the United States, when in reality they’re controlled by corporations. The people who sit on the board of directors at MSNBC also sit on other boards for other companies: Big Pharma, oil companies, things like that. They share board members.

At the end of the day, those are the people who are driving these programming decisions. That’s why that network is trying to hire more and more conservatives, people who believe that the free market is the way forward, people who think that privatization is going to solve all our problems, and people who think that climate change doesn’t even exist. That is the new face of MSNBC.